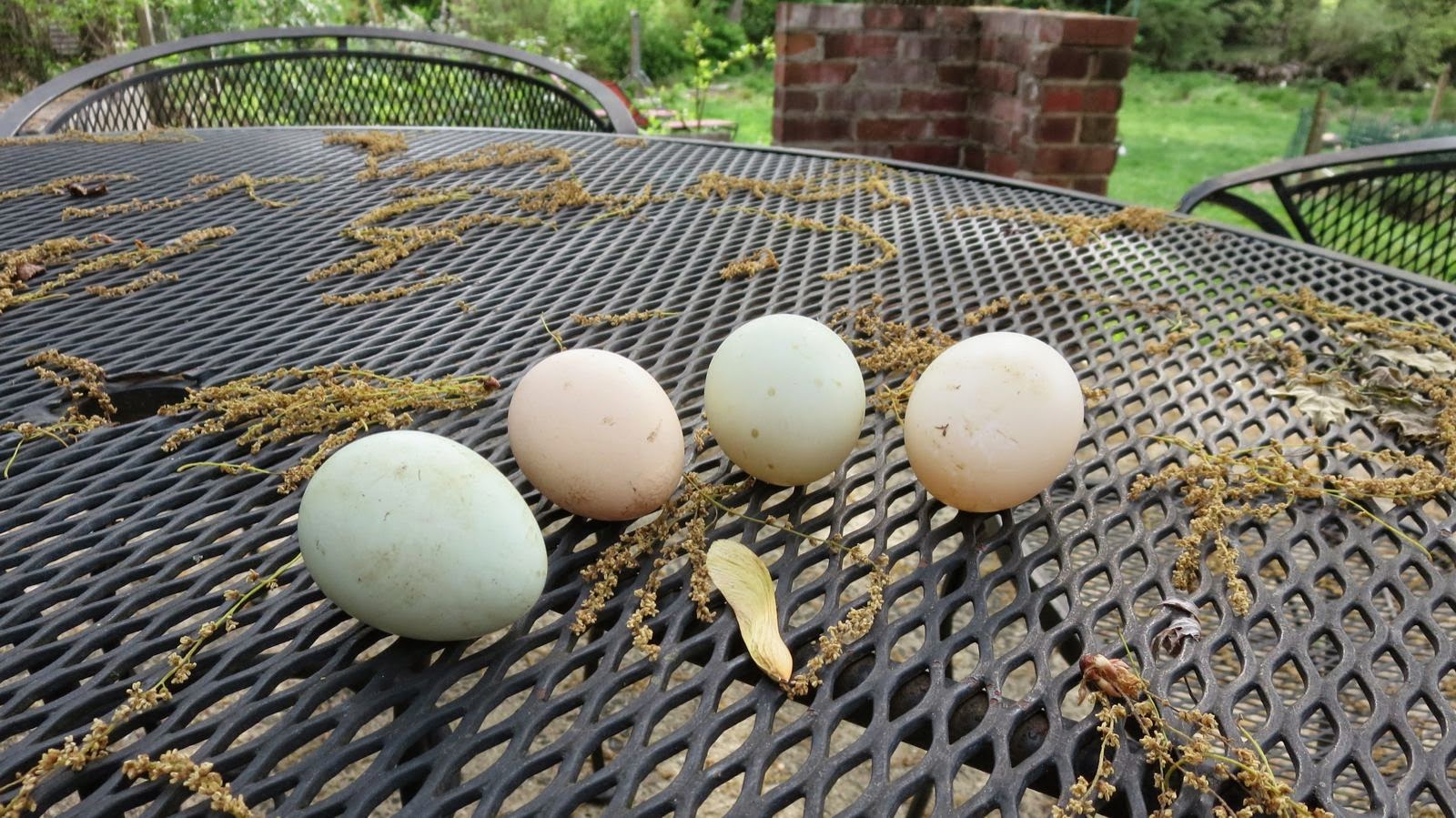 Yesterday, the gravitational pull was felt strongly in nature. Oak catkins and spinning maple samaras fell pell mell to the earth, as if on cue. Our chickens and ducks too offered a unified response by each laying an egg. A "four eggs day", I like to call it, with each egg different in size and color--a reminder of what life was like before industrialized agriculture taught us to expect uniformity. Left to right, we have the fine creations of Buffy, Buttons, Molly and Daisy.

Later in the day, at the Princeton Public Library, famed author and local resident Joyce Carol Oats offered some fresh creations of her own. Though the reading was to be focused on her recent novel Carthage, she quickly turned to the memoir she is currently working on. It doesn't sound quite right to say that chickens loomed large in her childhood, because even as a little girl growing up on a farm, she would have risen well above them. But an extended portion of her reading described the special chicken she developed a deep connection to and called "Lucky Chicken". At a very early age, she believed that the rooster's call opens a crack in the world through which the next day can enter. She told of that special feeling a child can have, never to be found again in life, of the chickens rushing to her as she approached with their feed.

A child can learn a great deal about the emotional dimensions of life from being around chickens, experiencing love and loss, and even evil. She had said during her reading that probably no one in the audience had ever fed chickens, so I felt obliged during Q&A to announce that we have chickens and ducks and that Princeton allows this, as long as the neighbors are happy. She said that she'd be worried about foxes and other predators, and I explained that we have a "guard duck" that seems to intimidate the hawks, which are the main daytime threat. "But do you have a rooster?", she asked. No roosters allowed in town, I replied. "You have to have a rooster.", she said, speaking perhaps more metaphorically than literally. She went on to say that her sense of evil lurking in the garden of life came from roosters. She was a shy girl, and treated the chickens well, but even so the rooster would peck and claw at her, drawing blood.

With that, they segued into the book signing portion of the evening, at which point I headed home to make sure the chucks and dickens were safely in the coop for the night.
Posted by Steve Hiltner at Wednesday, May 14, 2014