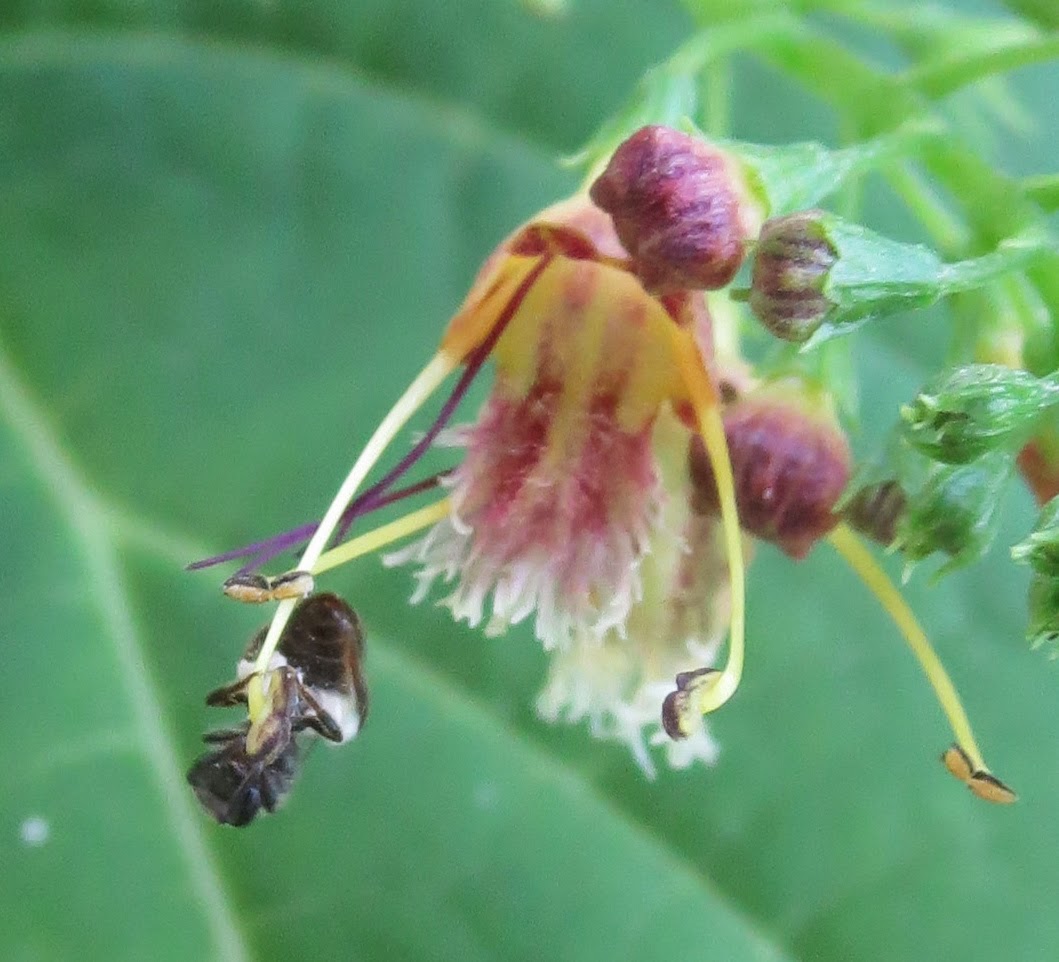 When it comes to flower biology, the more you look, the more you see. Sometimes a single observation can open up a whole new world. What, for instance, is going on here? Some sort of tiny bee is ignoring the main flower and instead doing a high wire act to nibble on the tip of a stamen jutting out from the petals. 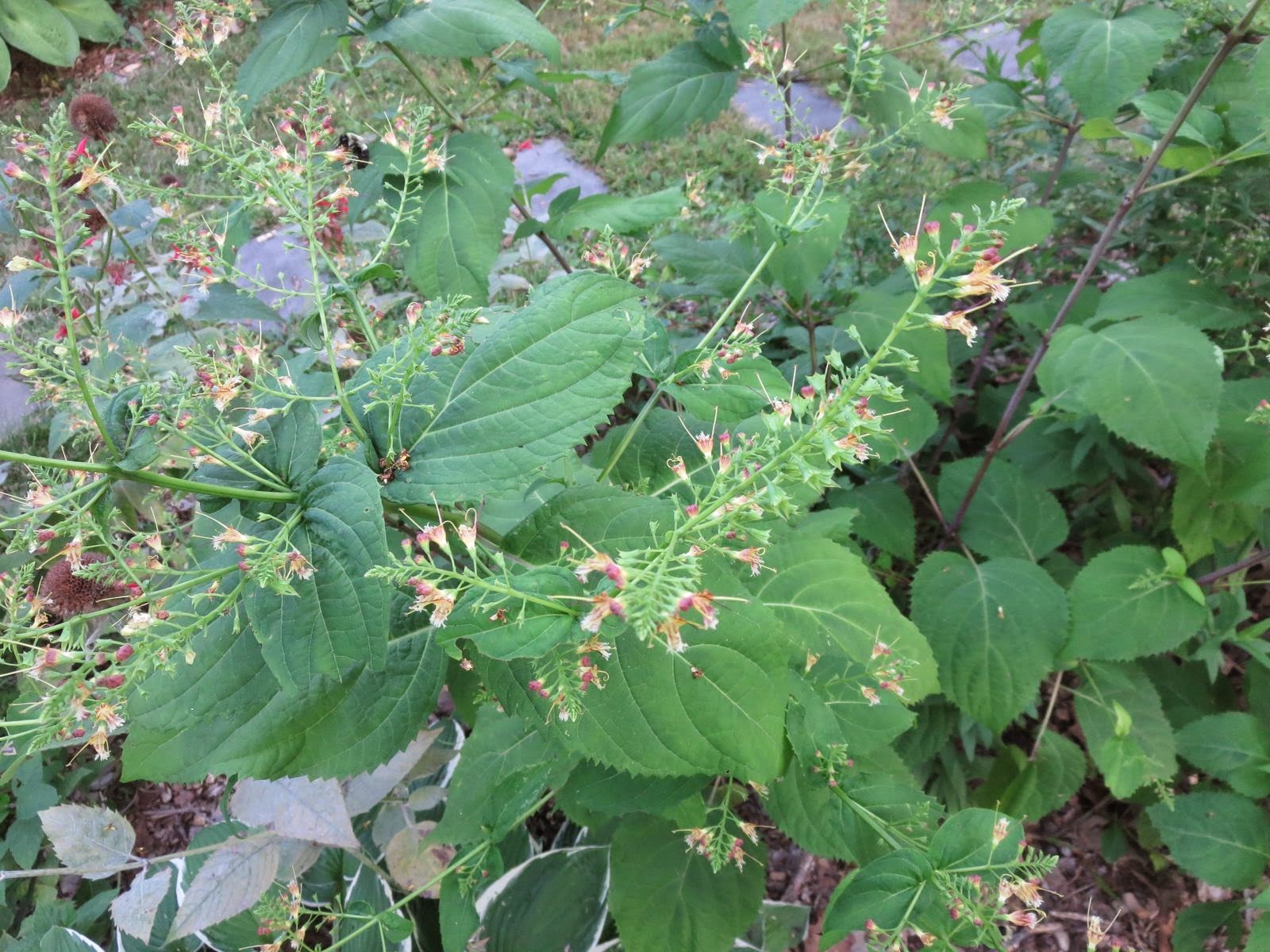 I had been content to largely ignore this fairly rare native plant growing in my backyard. It's sometimes called horsebalm (for no clear reason), or stoneroot (for its hard, medicinal root), but I prefer to call it richweed, because it has a preference for rich woodland soil, and the idea that something called a "weed" is also rich is appealing. I had rescued a couple from the path of a stream restoration, had read that it rates 9 on a scale of 10 on the plant stewardship index, and was content just to know it had escaped the bucket of a backhoe. In a mixture of sun and shade, it's fairly attractive when massed, with leaves reminiscent of hydrangea, but the flower doesn't grab one's attention. 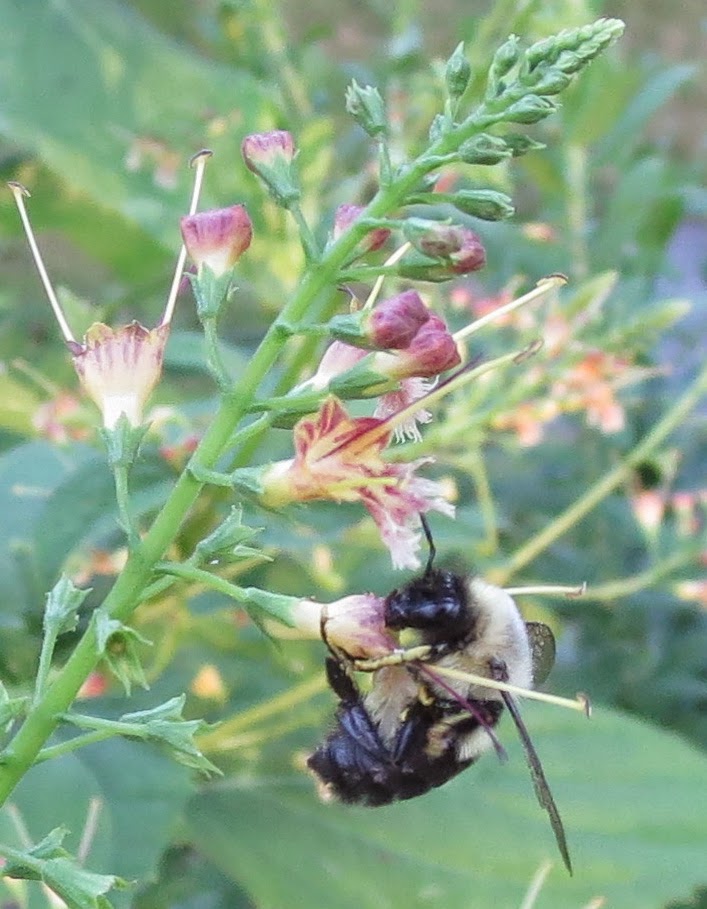 This summer, though, with cool weather bringing outdoor comfort and extended flowering lengths, I finally paused long enough to check out what sorts of pollinators the richweed was attracting. Mainly bumblebees, which look perfectly matched for this flower, bobbing from one to another, giving each one a bear hug as they sip the nectar. The flower is so shaped, with the stamens jutting out on either side of the flower, to appear as if the embrace is mutual. 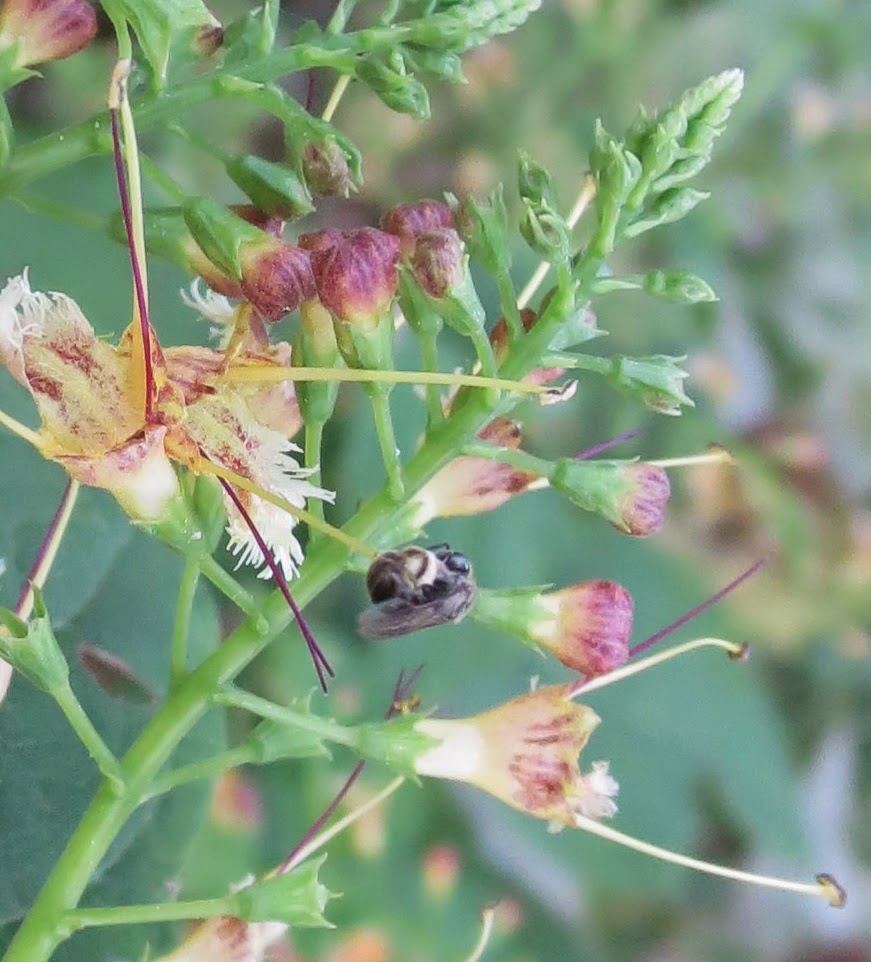 But then there was another kind of bee, smaller, that was, as mentioned, feeding not on the nectar but solely on the pollen at the end of each long stamen. 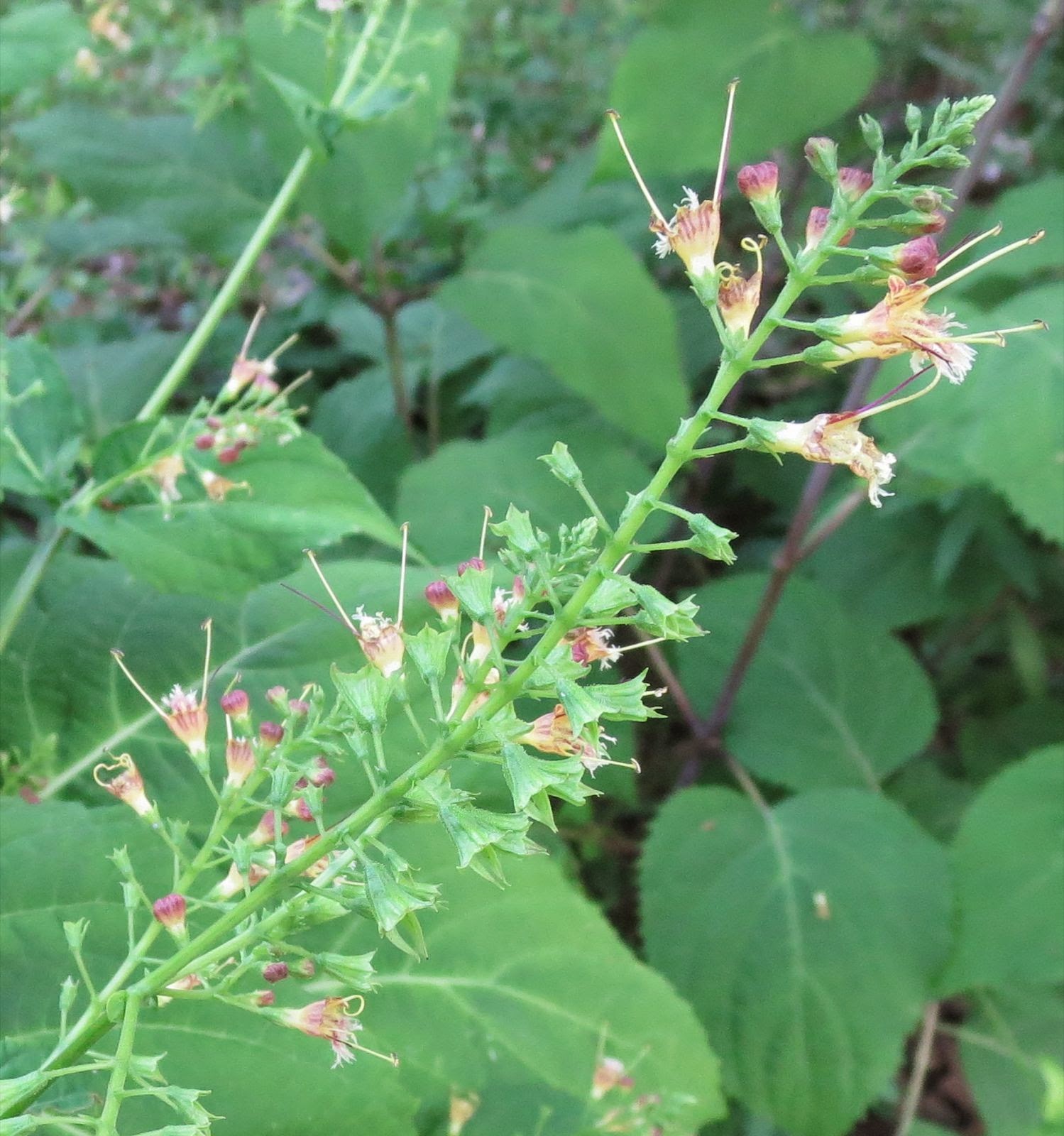 Stepping inside to browse the internet, word comes that richweed's flowers are lemon scented--fitting for a plant in the mint family. The root has medicinal qualities, and the stamens are described as "exserted", meaning protruding. (Those are the two finger-like protrusions that frame the flower.) One of the perks of learning some botany is that you're likely to encounter words otherwise lost from the english language. The companion for "insert" lives on in descriptions of flowers in dusty botany manuals.

While digging up lost words, why not give the internet a companion as well, i.e. the externet, or outernet--that being the web of life in the real world, the great outdoors, nature. One prompts exploration of the other. 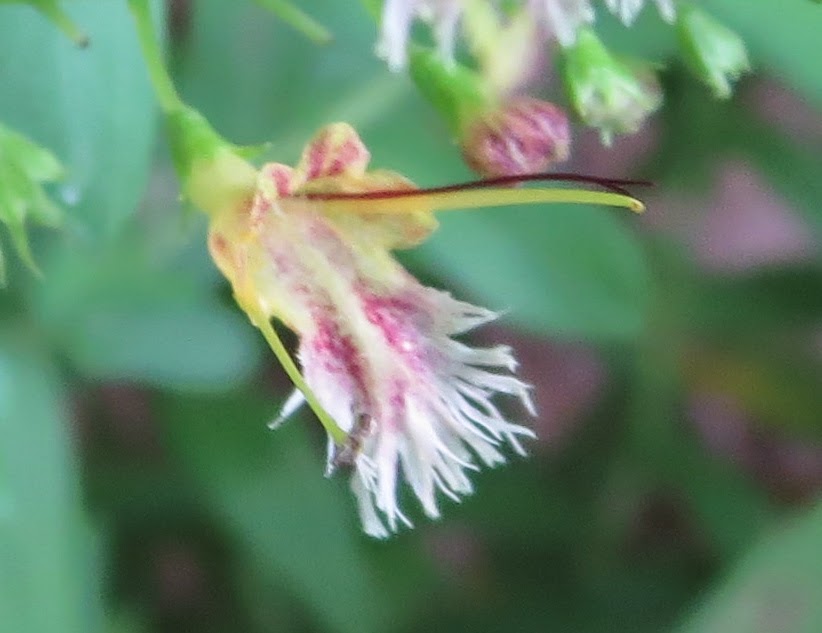 A deeper look at the externet, in the form of a long ignored flower, prompted a deeper look at the internet and what it has to say about richweed. One link led to a discussion of autogamy in The Natural History of Plants. Richweed (Collinsonia canadensis) fertilizes itself when the stigma at the end of the long style (purple with a tiny fork at the end, in the photo) bends over and touches the anther at the end of one of the stamens. Here's how it reads in the book:


"The accomplishment of autogamy through the inclination of a style otherwise straight is of even less usual occurrence. The most striking example of this process is afforded by the bilabiate flowers of the North American Collinsonia canadensis. In the newly-opened blossom the long style stands midway between two exserted stamens which are almost as long as the style. Towards the end of the flower's period of blossom, the style begins to slope towards one of the stamens, moving like the hand of a clock through an angle of from. 20" to 40" until its stigma comes against the pollen-covered anther borne by the stamen in question." 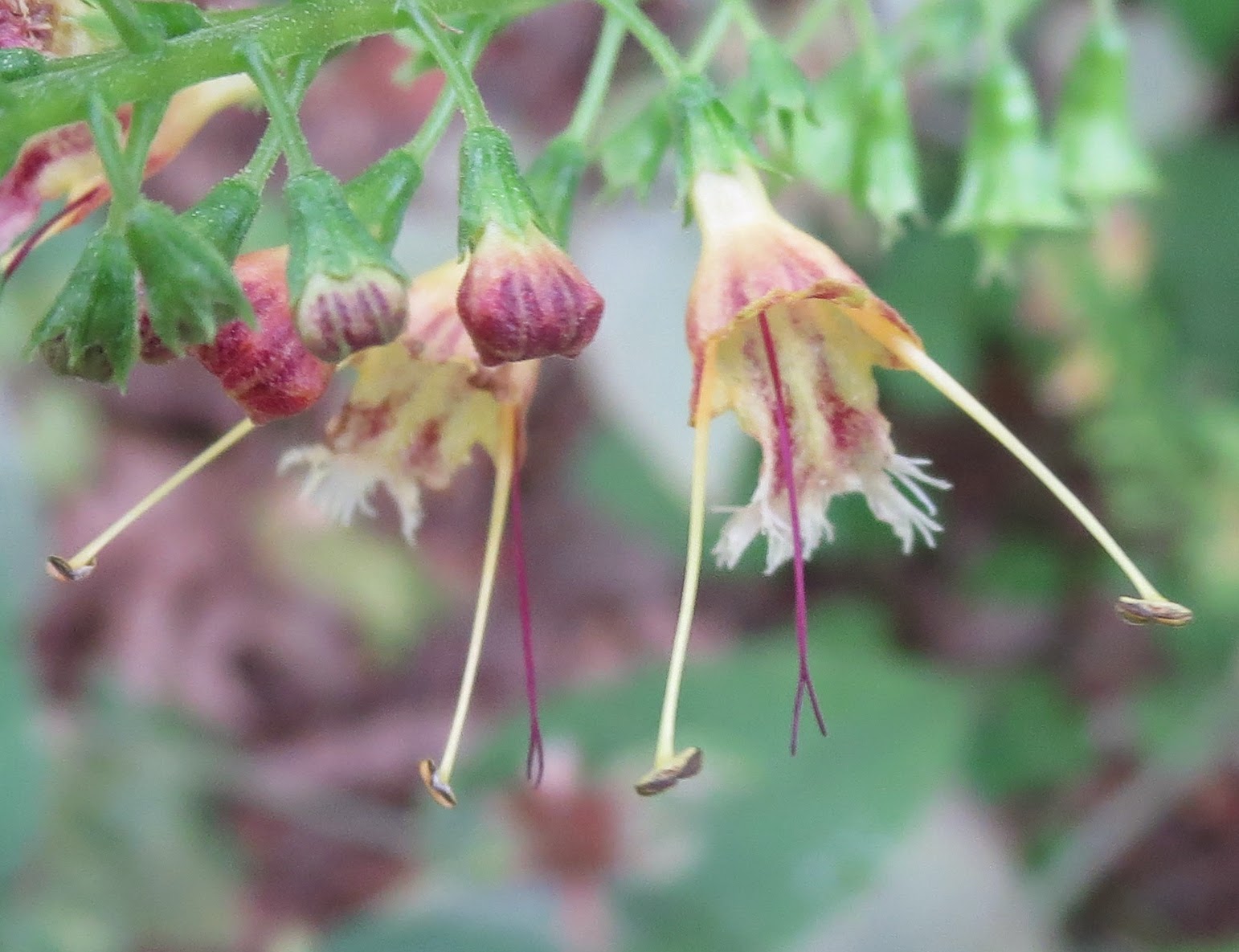 In this photo, you can see the (female) style of the flower on the left reaching over towards the (male) anther of the other, which in "The Botanic Garden, A Poem in Two Parts" becomes invested with great meaning:

"But I was this morning surprised to observe ... the manifest adultery of several females of the plant Collinsonia, who had bent themselves into contact with the males of other flowers of the same plant in their vicinity, neglectful of their own."

It's good to know that, if we ever run out of human indiscretions to feed the rumor mill, plants stand ready to fill the void.

The journey into the internet also brought up a marvelous text by William Bartram, early botanical explorer who made a late 18th century trip through Cherokee country.


"AFTER leaving the low grounds and ascending the hills, discovered the plant I went in search of, which I had before frequently observed in my descent from the Creek nation down towards Taensa. This plant appears to be a species of Collinsonia; it is diuretic and carminative, and esteemed a powerful febrifuge, an infusion of its tops is ordinarily drank at breakfast, and is of an exceeding pleasant taste and flavor; when in flower; which is the time the inhabitants gather it for preservation and use; it possesses a lively aromatic scent, partaking of lemon and aniseed."

Rich it was and rich it remains, this richweed, a valued remnant of the abundant wealth in that wild garden known as America.