It's time for a little Sunday sermon about good and evil, as it pertains to monarchs and herbicide. (I must be channeling my grandfather, who was a chemistry professor during the school year and a minister during the summer.) But before that, a brief, italicized update on the monarch for context:

Monarchs made their traditional appearance in the mountains of Mexico on the Day of the Dead, which is celebrated from Oct. 31 to Nov. 2. By November 2, according to JourneyNorth, the first several thousand arrivals had clustered on evergreen trees in Michoacan, with millions more still channeling south from Texas. Chip Taylor, who has made the monarch his life's work, predicted numbers at least double of last year's record low.

That's the good news, but the cards are still stacked against the monarch, as long as agricultural practices in the central U.S. and elsewhere are geared towards exterminating the milkweed the monarch depends upon for building its numbers each year as it migrates north.

Now for a little talk about the good, the bad, and the (far less emotionally gratifying) inbetween. It's human to want to draw a nice, clean line between good and evil. Mixing the two tends to diffuse the delicious, heady, mobilizing energy that drives many political movements. That nice, clean line also saves big-time on the mental energy required to make fine distinctions. But when it comes to chemistry, good and evil are often not inherent in a substance itself, but are more a matter of how much and where.

Take, for instance, the harsh portrayals of glyphosate, which has become famous or infamous as the active ingredient in Monsanto's herbicide, Roundup. It's now broadcast widely to kill weeds in farm fields, and has had a devastating effect on milkweed populations critical for the survival of monarchs. Because of its relatively low toxicity and price, it's also used in very small and targeted amounts by land stewards working to restore forest and grassland habitat. Since the patent expired, glyphosate can be purchased from other companies than Monsanto. Shall we paint with a broad brush, and implicate all who use it as collaborating to poison our world? This assertion I heard made recently by a resident at a town council meeting. She also said, falsely, that glyphosate "is half of Agent Orange, and that's all you need to know." 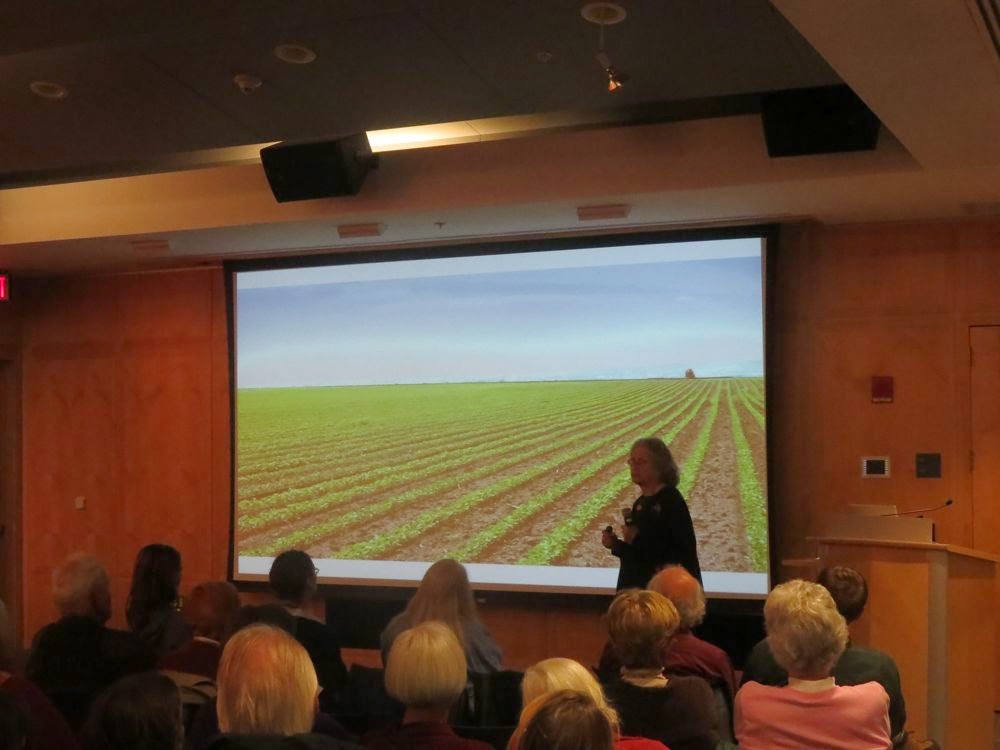 One doesn't need to make false assertions about glyphosate to question the way it is being used on such a vast scale. As Maraleen Manos-Jones explained as part of a recent, edifying panel discussion at the Princeton Public Library, Monsanto's "Round-up Ready" corn and soybeans now are grown on more than 100 million acres of cropland in the U.S.. Because the crops have been genetically modified to be unaffected by glyphosate, farmers can spray their fields indiscriminately, exterminating all weeds, including the milkweed the monarchs need to survive. Cornfields used to have enough milkweed growing in and around them to support monarchs as they migrated north. No longer. 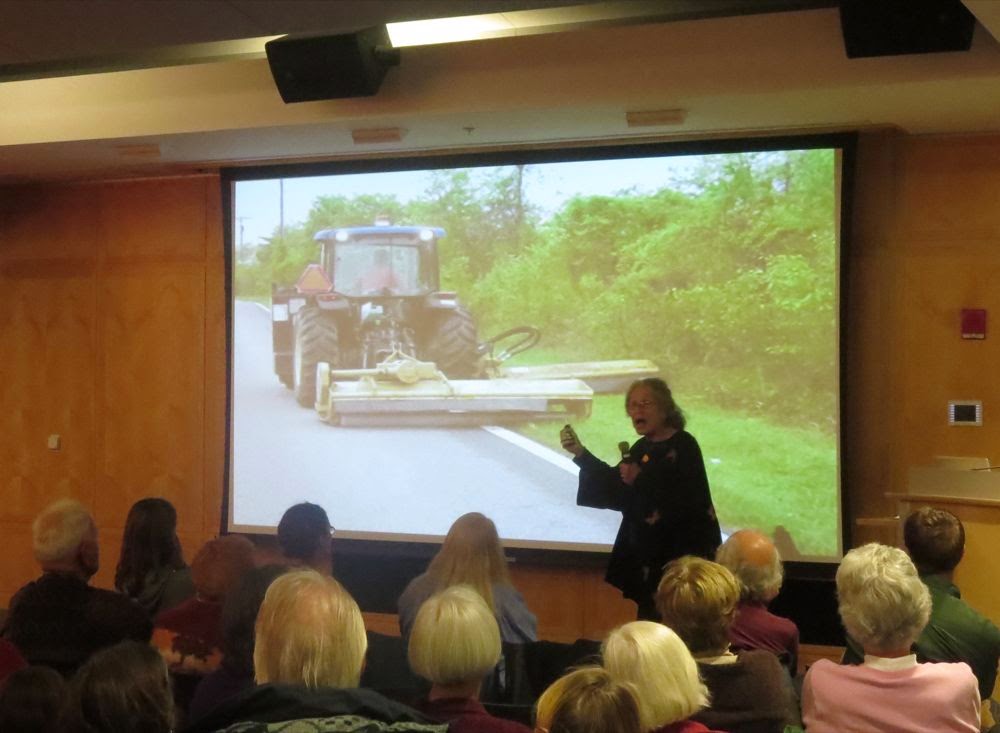 Meanwhile, even unfarmed areas such as roadsides are being managed in ways detrimental to the monarch. Herbicide use along roadsides and powerline right-of-ways, from my observation, is on the increase, and mowing in August and September wipes out flowers that could nourish adult monarchs, as well as any milkweed the caterpillars may be feeding on.

That, plus the increasing extremes of weather, are the stark reality monarchs now face, and Ms. Manos-Jones is as good as any at sounding the alarm. She was the first non-native woman to find the monarchs' overwintering grounds in Mexico in the 1970s, and by her telling has risked her life to defy the Mexican mafia that, along with local peasants in need of wood, has been cutting and fragmenting the dense forest the monarchs use for winter shelter. To drive home the threat, she used an aerial photo of the forest, showing a patchwork of clearcuts right next to a grove of evergreen forest turned orange by clustering monarchs. She's involved in a program to plant tree seedlings in logged areas.

But she also falls prey to a black and white apportionment of good and evil. Glyphosate is portrayed as a poison, pure and simple. That clear line may stir passion and a following. The thought of any herbicide getting into the body prompts a feeling of violation. But by laying blame on the molecule rather than on how it is used, people who use the herbicide responsibly are wrongly vilified. The indiscriminate casting of blame begins to bear resemblance to the indiscriminate use of herbicide.

At the other end of the political spectrum, one argument used to question the existence of climate change is that carbon dioxide is a good molecule, necessary for plant life, and so couldn't possibly be doing any harm. But carbon dioxide is beneficial or harmful depending on how much and where. Even as a diffuse molecule in the atmosphere, its concentration has a big effect on the planet. In enclosed spaces, artificially high concentrations of carbon dioxide can, like carbon monoxide, be lethal.

As appealing and convenient as it might be to brand glyphosate as an unmitigated evil, it's the least toxic among herbicides that land stewards have available. Now, the question often comes up, why must any herbicide ever be used for habitat restoration. Why don't land stewards just dig up the invasive shrubs? I would have asked the same if I had nothing more than a backyard to tend to. 100 acres of land choked with non-native shrubs whose foliage the wildlife refuse to eat is another matter. We could leave it be if we didn't want wildlife to have an edible landscape. We could dig the shrubs out if we had infinite time and energy, and didn't care about mass disturbance of the soil. Or, we could use tiny, targeted amounts of low-toxicity herbicide in much the way a doctor prescribes medicine.

The comparison of herbicide to medicine is useful. Ever since Silent Spring, environmentalists have been devoted to freeing the landscape of the scourge of chemicals. When it comes to our bodies, however, environmental and medical thinking are seemingly at odds. Many of us prefer organically grown food, yet willingly ingest chemicals in the form of medicine. For instance, we don't view antibiotics as poisons, but instead make a clear distinction between their beneficial, small-scale, targeted use as medicine, and the much criticized, indiscriminate use of them in cattle and poultry feed. Interestingly, the vast scale of current glyphosate use has led to a sharp increase in resistance in weeds, much like indiscriminate use of antibiotics has led to resistant pathogens.

The best medicine targets the pathogen in the body without affecting the healthy tissues. This is precisely what land stewards do when they dab a bit of glyphosate on the cut stump of an invasive shrub in the forest. A healthy skepticism about herbicides need not preclude applying the same distinctions drawn by medicine. In a forest that's been thrown out of balance, glyphosate can play the role of an antibiotic that, in small, directed doses is very low-risk, helpful and even critical, but becomes problematic when overused. 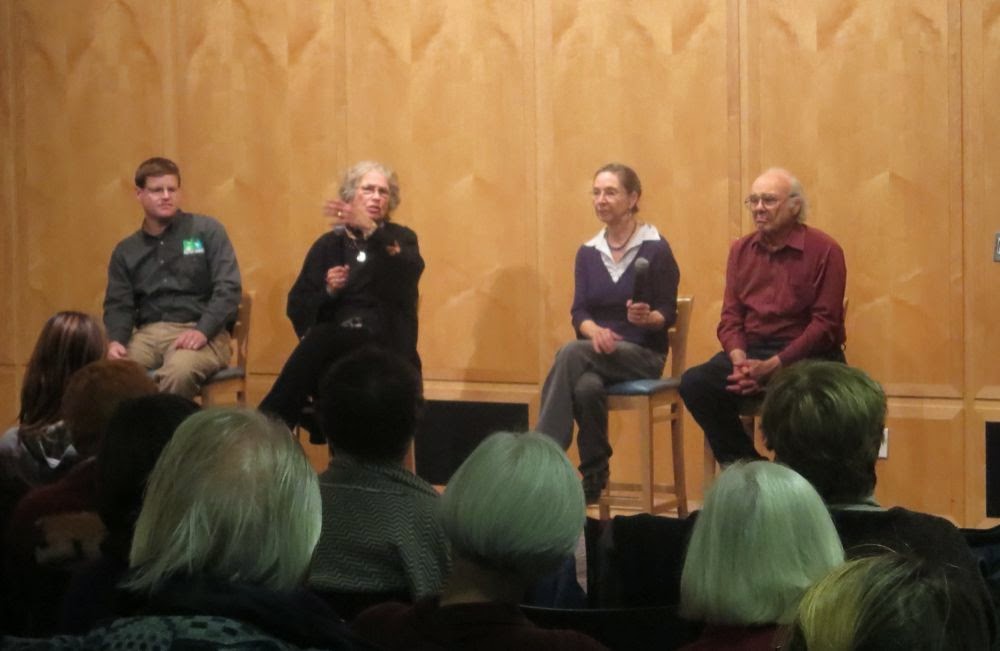 The three other panelists exemplified this more nuanced, pragmatic view.

Michael Gochfeld, Rutgers professor and co-author with his wife of "Butterflies of NJ", delved into the data on monarch population swings year to year. Most memorably, he described how profoundly weather affects the annual butterfly counts that often last only one day. Even if the sun just disappears behind a cloud, the butterflies are apt to disappear as well, and not get counted. He encouraged all interested to participate in the butterfly counts through the local chapter of the North American Butterfly Association.

Robert Somes, a biologist with NJ DEP's Nongame and Endangered Species Program, said that concerns about monarchs are bringing attention to the work he and others are already doing to manage public lands for rare or endangered species. They use prescribed burns to promote habitat for the Aragos skipper, and clear invasives with a mix of minimal herbicides and mechanical methods. This work benefits local as well as migratory pollinators.

Flo Rutherfeld, of the New Jersey's World of Wings Museum, was the last to speak, and gave some tips for gardening that caters to butterflies. Have a variety of plants that will provide flowers from as early in the season to as late as possible. Morning Cloaks and Question Marks overwinter as adults, so are out and about in the spring. Monarchs will spot wildflowers more easily if they are clumped. Leaf litter is important for overwintering butterflies and moths. Some species even use decomposing leaves as their "host plant".

Invasive species are also impacting monarchs and other butterflies. Gochfeld said that Hairstreak number may be dropping due to an invasive ant. (An account of how native ants have a symbiotic relationship with the caterpillars of Coral Hairstreaks can be found here. Invasive ants often displace native ones, severing the symbiotic relationships that have evolved among native species, with cascading consequences.) Rutherfeld mentioned a non-native milkweed called dog-strangling vine that is causing problems in the northeast. An Ontario website called InvadingSpecies describes how this invasive plant interferes in multiple ways with monarch reproduction: