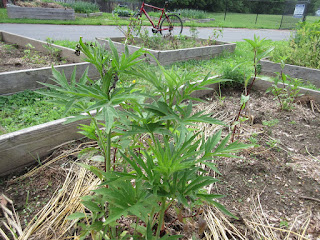 We did a plant and run at the Princeton High School this past June. The planting was intentional; the running was not. A plant and run is when everyone shows up to plant a garden, but no one comes back to take care of it. I'm the type that's more likely than most to follow through, but the lesson sometimes needs to be relearned.

When my younger daughter expressed interest in doing something along environmental lines at the school, I suggested, not too surprisingly, that she and her friend plant some native wildflowers in one of a number of raised beds that had for some years been growing only weeds. We did, and at least I came away with a high sense of good deedery, owing not only to having involved the next generation in transforming a weed-filled bed into a demo for natives, but also having catalyzed the repair of the gardens' water supply with a well-placed email or two, thereby improving the prospects for all the raised beds going forward. 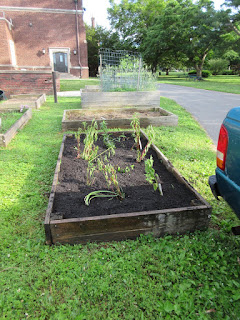 We had intended to return soon thereafter with mulch, but life intervened, and by the time we remembered, a rainless week later, the plants were looking pretty sad. In the meantime, some students supervised by the school horticulturist had fixed up all the other beds, which is reason to celebrate though suddenly our bed looked neglected by comparison. Still, after a deep watering, careful weeding and a fresh layer of mulch, prospects for recovery were good. 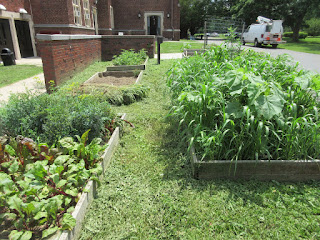 One rainy month later, as if perched on the cog of an internal Mayan calendar, the memory of the garden again surfaced in the mind, leading to our walking the dog over there to see how things were going. Our good deeds had disappeared in a mountain of weeds (there on the right in the photo), while the other beds were growing well-tended swiss chard and beets. 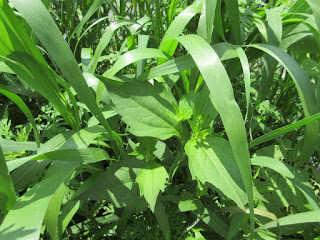 This is where a keen eye comes in handy. There's the cutleaf coneflower in a sea of foxtail grass. 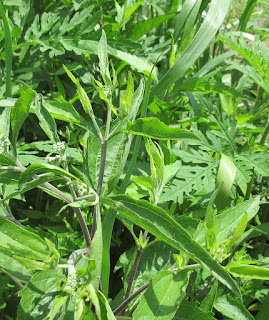 And there's the late-flowering boneset amongst the ragweed. 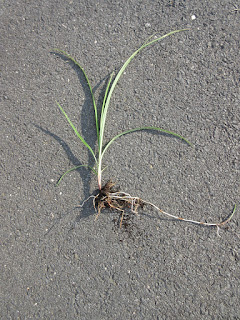 The thin mulch had done little to discourage the weeds, though it did keep the soil soft enough to allow extraction of a nutsedge with it rhizome system intact--a rare sighting, like seeing baby pigeons. 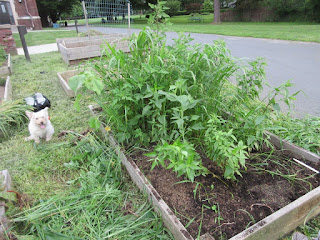 We carefully liberated the intended plants, which thankfully had hung in there despite the competition. 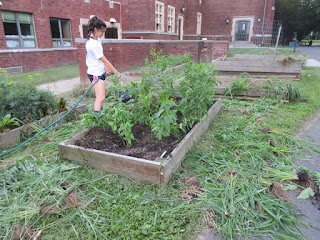 At some point, the weedy seed bank will exhaust itself, and the native wildflowers will dominate, but after years of growing weeds, this raised bed is a bit like a wild horse that resists taming. It's a good lesson for one generation and a reminder for the other, about the power of weeds and the importance of followup on good intentions.

Let's see, those most recent photos were taken about two weeks ago. Hmmm. I think I know where the evening walk with the dog is headed.