I broke through one of those self-imposed glass ceilings the other day. No broken glass scattered everywhere, just a new feeling of empowerment, in that pedal power conveyed me with surprising ease to a destination I would normally jump in a car to reach. The destination was a reception for a new art exhibit entitled Color in Nature, at DR Greenway out Rosedale Road. The bikeride unexpectedly offered a nice warmup to the theme of the exhibit, with milkweed drawing the camera's eye. 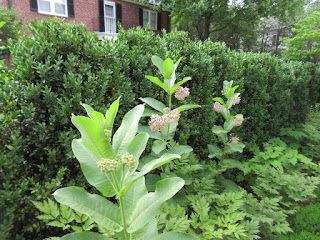 Interesting to see how common milkweed, which normally toughs it out in fields and along road embankments, is being featured in front of a million dollar home on Cleveland Lane, mixing it up with tonier perennials with a well-groomed boxwood hedge as background. Maybe the homeowner is expecting some distinguished guests--royalty perhaps, or a Monarch. 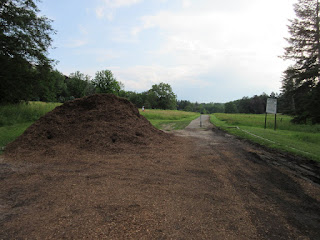 Even without a tailwind, it seemed a breeze to get out to Greenway Meadows, and with a bike one can get off Rosedale early and take the scenic route through the park, with the rec department's pile of mulch standing guard over the vista just beyond. 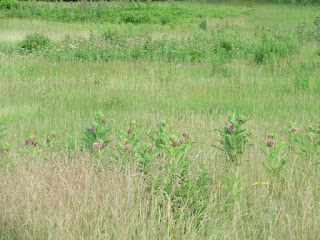 With cool season grasses maturing in early summer, the milkweed stands out. Monarch butterflies depend on favorable winds to make their cross-continental migrations, but it's the strength and resilience of the common milkweed that has served as a metaphorical and nutritional "wind beneath their wings" through the millenia. 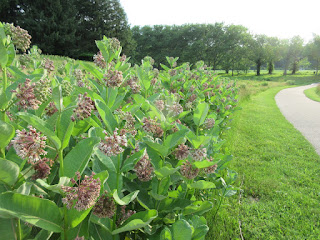 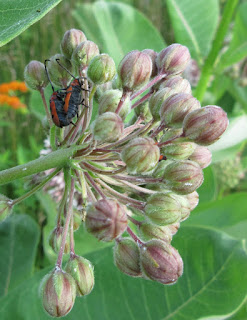 No monarchs yet, but a beetle or two. 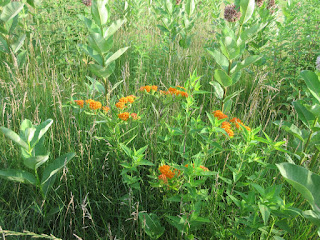 Lower slung and less common is another milkweed, the butterflyweed (Asclepias tuberosa), which has a growth habit akin to orange broccoli. 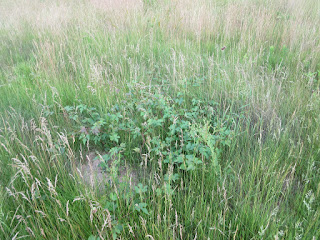 No habitat restorationist can look at a meadow and not see something that needs tending to, like this incipient presence of porcelainberry, but maybe an annual mowing limits its spread. 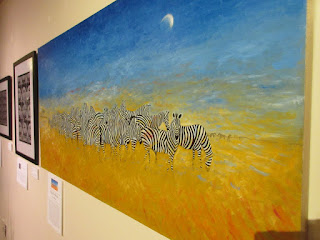 And at the destination, art, a cool drink, some familiar faces. Bicycling has a reputation as being secondary in convenience to cars, but sometimes it feels first class.

(Check out another edge-of-town destination this Sunday, June 28 from 1-4pm, as they close off Quaker Road for the annual Ciclovia.)
Posted by Steve Hiltner at Friday, June 26, 2015