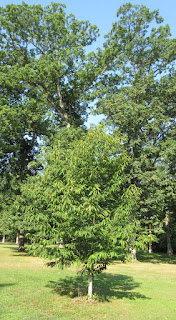 While the discovery of Emerald Ash Borer in Princeton several weeks ago cast a big shadow on Princeton's most numerous tree, there's another shadow, growing larger every year, that's reason for hope. That would be the shadow behind this native chestnut tree growing at the Textile Research Institute (TRI) in Princeton. Planted just five years ago, it's now fifteen feet tall, well on its way to taking its place among the oaks towering behind it. 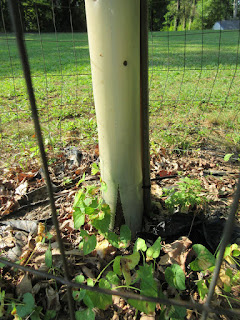 The protective collar around its trunk is beginning to unzip as the tree gets too big for its britches. 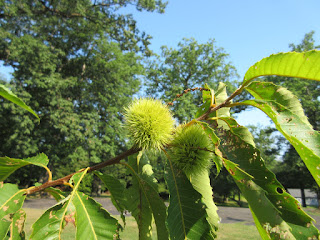 This marks the first year it has bloomed, though there may not be any nuts for lack of pollen from other trees. In future years, a less precocious companion planted nearby may catch up and provide that pollen.

These chestnuts, which are really 15/16th native, with some asian genes mixed in to aid in resisting the chestnut blight that laid this species low a century ago, were planted by Bill Sachs, a local nut tree expert who has planted chestnuts and butternuts in a number of locations in town. Butternut is another native tree much reduced in numbers due to an introduced disease.

Below is Bill's status report, from an email. It shows how much persistence and resourcefulness is needed to bring back a species, with a touch of serendipity now and then:


"Yes, I know the one chestnut at TRI flowered this year but there may be no nuts for lack of a pollinator. That tree was two year-old bare rooted stock when planted in 2010. Pretty precocious. Same generation as the ones we planted at Mountain Lakes (there are no healthy survivors left there) and on the Princeton Battlefield (two survivors, one of which has blight). This fall and spring, we may try to inoculate the trees that have blight with the virus that causes hypovirulence.

There are three planted butternuts at TRI, all pretty close to one another. Two of them have been surrounded by blackberries and other brambles that need to be cleared. Will do that this fall… may need to rent a brush cutter.

Also, discovered a ‘new’ native butternut at ML with a few nuts on it. Been walking past it for years and this is the first time I noticed it because I happened to be looking up into the surrounding crowns to assess the health of the ash trees along the trail."