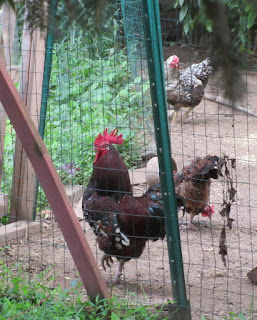 To all the voices that hold forth in Princeton, add some cockadoodledoos. I had heard that there were some roosters among us--a painter who grew up in South Africa told me a few years ago the sound made him feel at home--but had not heard any until this past month. One was east of Harrison Street a few blocks, which I took the liberty of photgraphing. The other is within crowing distance of town hall.

The legality of having poultry in Princeton comes up now and then. There are some ordinances left over from the borough/township days that were contradictory. The straightest answer I got when I looked into it was from the town's former animal control officer, who said they are legal, or at least tolerated, as long as the neighbors are happy. It was my impression that roosters were not permitted, but it may be that the happy neighbor rule determines whether any ordinance, written or improvised, is enforced.

Though a rooster would never tell you this, they aren't needed for egg production. We'd have to ask the owners if they intentionally bought roosters. Chickens are sold when just a couple weeks old, when sex identification can be tricky. Famed Princeton resident Joyce Carol Oats said, in response to a question I asked after she read from her memoir at the Princeton Public Library, that chickens in general and roosters in particular were an important part of her childhood. 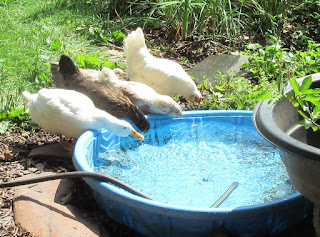 We currently have one Pekin duck and four Aracana chickens. The chickens are quiet sorts, but the duck can speak out at various points during the day, calling for more food, or announcing to the world that it is now waddling across the lawn. Neighbors tell me they like the sounds, as a rural salve for the traffic noise on Harrison Street. The droppings disappear into the grass, and any scratching the chickens do leaves our flower gardens undisturbed.

As pets, they are low maintenance. Clean the coop now and then, make sure there's food and water in the backyard, open the coop in the morning, close it at night. We free-range them, meaning they have the run of the fenced-in backyard. We have lost a few to hawks over the years, usually in late fall and winter when wild prey are less available and the birds have less cover. It can be traumatic, but it brings us up against important issues of life and death, pet vs. livestock, quality of life vs. longevity, risks and rewards, and our relationship to the wild animal community that also calls Princeton home. Interestingly, it's the white birds that the hawks have left alone, as if hawks, too, associate whiteness with some otherworldly nature.

The chickens have shown no desire to fly away, and the duck is so heavy that she has even less chance of clearing a fence than the contraption the claymation chickens built in the movie Chicken Run. The chickens lay eggs most days, and the duck produces one egg per day like clockwork. An Italian neighbor, who barely speaks english, knocks on our door periodically, seeking a dozen duck eggs for her Chinese daughter in law. Perhaps the greatest pleasure, in a town where yards go unused and can tend towards sterile display, is seeing how much the birds appreciate and take full advantage of what the yard has to give.

Though a rooster might help protect the hens, our "guard duck" performs a similar role while producing copious amounts of eggs. In addition to her big, boisterous voice during the day, at dusk she assumes her post just inside the coop door, her beak a formidable weapon ready to unleash against any would-be intruders.

A previous post gives more details, and local sources of chicks. Rosedale Mills told me they were selling chickens beyond the optimal April/May season, though it helps if they are fully grown by the time winter comes.
Posted by Steve Hiltner at Saturday, August 08, 2015