Another Wishing (the earth) Well in the Neighborhood

Posts on a blog and letters to the editor are released into the community to an uncertain fate. Will they lodge in anyone's mind, to any effect? Irrefutable evidence came last weekend when Peter and Suzanne, neighbors around the corner, stopped by to ask about the Wishing (the earth) Well placed in our front yard next to the sidewalk. What to do with the oak leaves, which seem not to decompose at all when left on the ground. I explained the logic of the dual purpose leaf corral--a circle within a circle, with the inner circle being a central, critter-proof cylinder into which food scraps can be put, disguised by the surrounding leaves. 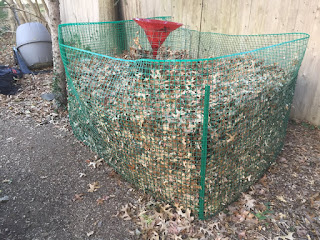 Peter thought about what fencing he had left over from other projects, went to the local hardware to buy stakes, and later the same day sent me a photo of their new leaf corral next to the back fence. Instead of wire fencing for the leaf-containing outer ring, it uses plastic, which is probably cheaper and appears to hold its shape just fine. Given how ideas tend to incubate for long periods, this quick turn around, from idea to reality in a couple hours, was truly refreshing. 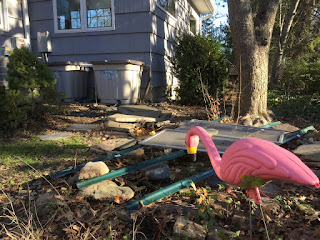 Another neat feature in Peter and Suzanne's yard is a mini minipond, fed by sump pump water that is pumped into the small cisterns next to the house, then gravity fed to the little pond. A pink flamingo stands guard, perhaps to intimidate any great blue heron that might stop by. The screens are there to catch any heavy snow we might get this winter, and they may help discourage the raccoons and fox from stealing goldfish.

With the solar panels mounted on their roof, that means they're utilizing the sun that shines on their house, the sump pump water that comes from underground, and the leaves that fall from the trees. It all makes life, and the yard, a lot more interesting.
Posted by Steve Hiltner at Wednesday, December 23, 2015