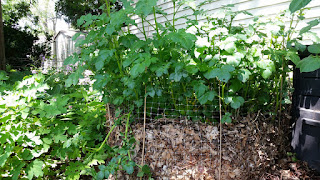 My sister-in-law, Edna, must have been reading my mind, which was puzzling over possible additional uses for a leaf corral. After being filled in the fall with leaves, a corral needs to sit through to the following autumn before harvesting the rich compost generated within. Snow, rain and decomposition cause the leaves to settle considerably. Might the corral do something more than just sit there through the summer, looking half filled?

Edna answered that unspoken question by sending me a photo of her leaf corral in mid-summer, resplendent with the growth of potatoes. She took some store-bought potatoes that had started to sprout, buried them a few inches down in the pile of leaves, and let the potatoes do the rest. Because the potatoes weren't grown in the standard way in soil, they were much easier to clean. She mentioned having prepped the leaf corral by watering some Milorganite into the leaves, to add nutrients and speed decomposition. A product produced near her suburb of Milwaukee, Milorganite is described on its website as "composed of heat-dried microbes that have digested the organic matter in wastewater." That's a 90 year success story in and of itself, but I'm thinking of skipping the Milorganite in favor of a few shovelfuls of rich dirt or compost sprinkled on top over the winter. With decomposers migrating up from the soil, and nutrients infiltrating down from above, there should be plenty for potato roots to feed on, sustained through droughts by that moist, spongy realm inside a leaf corral.

Riffing on the "Wishing (the earth) Well" name for one of our leaf corrals, the potato-bearing corral can be called the "Living Well", which feeds nutrients back into the earth while growing food out of the top.