Five days after the big snowstorm, and memory finally returns of the comic "Snowbound Language" piece posted two years ago, in which the language becomes as snowbound as the landscape. In the story, Snaddy, his snife, snaughter and snarking snog deal as best they can with the deluge of snow that has laid siege to their snouse. A lexicon for snowbound language can be found in a post called Principitation, which provides names for all the sorts of precipitation that is made special by having fallen on Princeton. There's snuff, snirt, snapples, snazzycakes and snight (snow that falls at night), snizzle and snool. The inspiration was a mix of the extraordinary variety of snow we got in early 2014, which made clear how the Eskimos could develop so many different words for snow, and Victor Borge's classic Inflationary Language, which allows language to inflate along with the economy. Create becomes "crenine", wonderful becomes "twoderful", and sofifth. 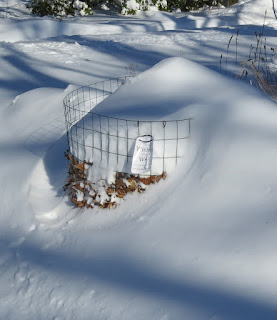 The storm this past weekend brought a whole lot of one kind of snow, rather than the crazy variety of formulations that fell two winters ago.

This year's storm made it hard to compost the food scraps in the frontyard Wishing (the earth) Well, 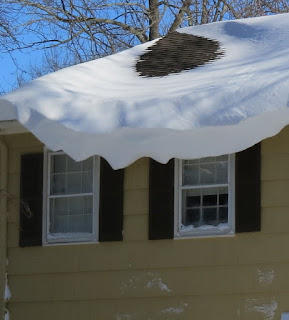 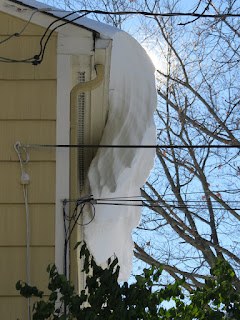 made our roofs into glacier-capped mountains, 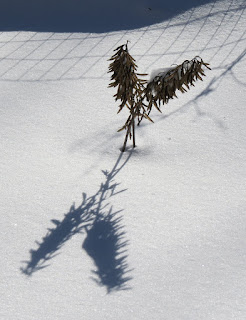 collaborated with the sun to fashion a shadowy snow angel with the head of hosta seeds, 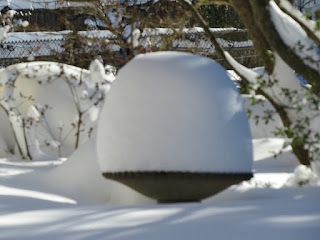 served up a birdbath snowcone, 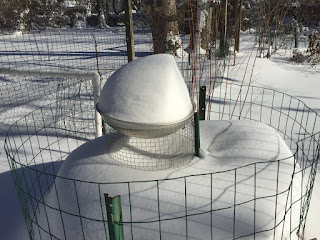 fashioned a leaf corral snowman who looks like he should have Pinocchio nose,

and availed itself of the comfort of our lawn furniture. A little sculpting and we'd have a pair of very content snowmen.
Posted by Stephen Hiltner at Thursday, January 28, 2016