Albino Pumpkin to the Rescue 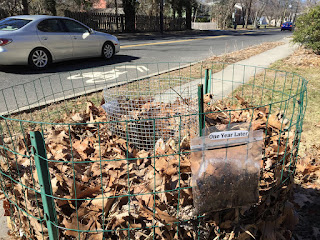 Princeton, a theft has occurred. Anyone who knows what a "Wishing (the earth) Well" leaf corral should look like will immediately notice that the hubcap that adorned the central cylinder, where the food scraps are placed, is now missing. I mean, what has civilization come to, that stray plastic hubcaps are now being stolen from frontyard leaf corrals in our fair town. 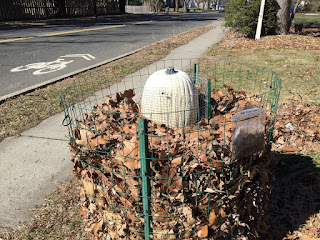 Fortunately, a neighbor around the block had left an albino pumpkin out on the curb, apparently not needing its services any longer but not wishing to consign it to the trashcan. I had passed it by several times, not knowing what possible use an albino plastic pumpkin could be put to in the middle of winter. Finally, an answer came.

My sense is that the pumpkin will not disappear, protected by it's lack of any other apparent use, and also by its albino nature, which like a white buffalo radiates a spirituality sufficient to spook any would-be predator.
Posted by Steve Hiltner at Monday, February 29, 2016