Why the Native/Non-native Distinction Matters

Here are two examples of leaves being stripped by insects in the backyard. One example is likely harmless, and actually shows that there's a functional foodchain in this backyard habitat. The other signals the arrival of yet another severe blow to our local ecology. 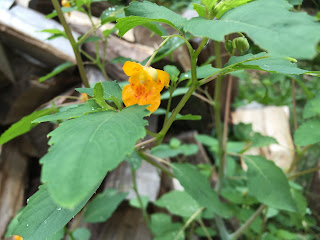 Most people recognize jewelweed, the annual with tubular orange flower that feeds hummingbirds, and has a fleshy stem that some use to rub on poison ivy skin rash. The flowers hang like earrings, and turn into spring-loaded seedpods that are fun to put in the palm of the hand and explode. Used to seeing it grow robustly in low wet areas, I was surprised this morning to find one defoliated. 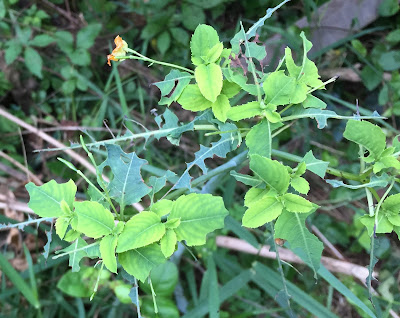 A few new leaves had sprouted from stems made bare by a caterpillar. 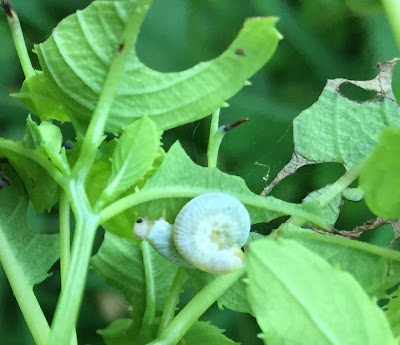 Closer inspection showed a busy caterpillar on the underside of new leaves. Some internet research (here and here) suggests there are several species of moth that feed upon it.

Though this one plant was defoliated, others in the garden are prospering. If the caterpillar is native, one can assume it's been consuming jewelweed for thousands of years, and so poses no threat to its favored plant species' survival. 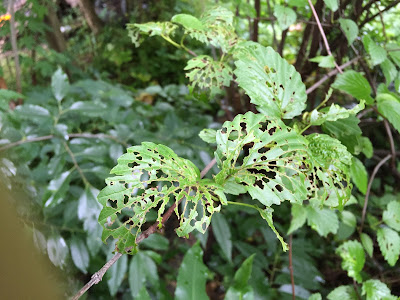 Here is a much different situation--an arrowwood Viburnum showing signs of insect damage. Chances are good that this native Viburnum, which has flourished for a decade in our backyard, is not being eaten by a native insect with which it has coexisted for millenia. More likely the hungry caterpillar is the Viburnum Leaf Beetle. Imported from Europe, it has been spreading across the eastern U.S. Since it did not evolve here, the native Viburnums have had no chance to develop defenses to limit its consumption. As with the Emerald Ash Borer that is beginning to devastate our ash trees, the introduced Viburnum Leaf Beetle will likely cause radical changes, not only in our forests but in backyards as well.

Local nature, in effect, is sustaining one body blow after another, due to the introduction of non-native species, some of which unleash radical change. It's important to note how our world is being transformed by unintended acts while the news media focus on intentional acts of destruction. If a rogue arborist began randomly cutting down people's trees and shrubs, there'd be a great outcry and the destruction stopped. But if an accidentally introduced insect does the same, causing millions of dollars in damage, its accepted with a shrug and a sigh. Add the collateral damage known as climate change into the mix, and you see how profoundly vulnerable is our world, no matter how big the military or well trained the police force.

A useful approach to defining "native":
There's a lot of confusion about what the word "native" means, and why it's an important distinction in ecology. Some contend that all plants and animals are native to the planet, and so all species should be welcomed everywhere with open arms. That supposedly openminded point of view requires denying the reality of co-evolution. It's really quite simple. When plants and animals evolve together for thousands of years, they adapt to each other's presence. A balance develops, in which plants evolve chemical or physical defenses that discourage animals from eating them into oblivion. Animals, in turn, develop the capacity to crack those defenses sufficiently to get the food they need to survive. There's a balance of consumption.

Here's a well-written column explaining how differently a plant like garlic mustard behaves where it evolved, vs. after being introduced to a new continent.
Posted by Steve Hiltner at Wednesday, July 13, 2016