Delight and Tragedy in a Summer's Downpour

Water's capacity for delight and destruction was on full display yesterday during an extraordinary downpour. It provided definitive proof, as if any more were needed, that we must work with nature rather than against it. 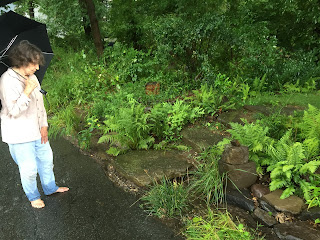 When the rains began, I was just finishing an enjoyable tour of my friend Suzy's garden in Lawrenceville. She brought me in to consult on what plants to keep and which to remove. Suzy was one of the founders of the Whole Earth Center, nearly 50 years ago. The rain provided a chance to see how her roadside garden captures and channels runoff from the street. 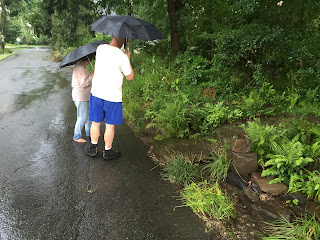 Using stones to manipulate the water's flow, her gardener Andrew Thornton has created whimsical, Inca-like channels for the water to follow, feeding the native sedges, ferns and wildflowers as it heads down the slope.

The rain got very dense, and I retreated to my car to drive home to Princeton. Coming up 206, the street had already become a river, even though I knew the worst of the storm was yet to come. I began to think of places to go to see what the water was doing. The middle of a storm, if there's no lightning, is the best time to check out Princeton's water works, or water wrecks, depending.

Then I remembered the high school, and had a sense of foreboding. The school had flooded in 2009, due to poor design of an addition along Walnut Street. The basement, cafeteria, hallways and offices were flooded, and the performing arts stage had to be replaced. I had repeatedly warned the various powers that be that a repeat was very likely, and had offered a solution, but no action had been taken in all of those years. This storm felt very much like 2009's. 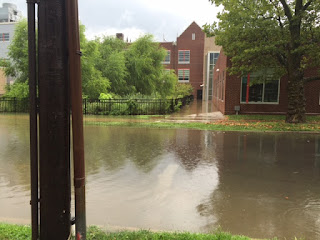 I arrived to find Walnut Street completely flooded. When the underlying stormdrains are overwhelmed, the street becomes a river that actually flows towards the school. That's the performing arts wing on the right, and the detention basin/wetland on the left. People have tried to blame the wetland plantings in the basin, but we have shown that the real problem is that Walnut Street is higher than the school. 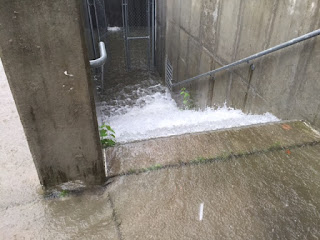 Water flows downhill, and went straight from the street down into the school's basement. In the past, the facilities crew has placed sandbags here to block the water, but staff probably live too far from Princeton to respond in time to a sudden storm. And it was only a matter of time before that bandaid approach would fail. 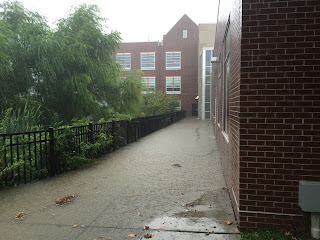 Some of the water from Walnut Street seeped under doorways and into the bandrooms and hallways. 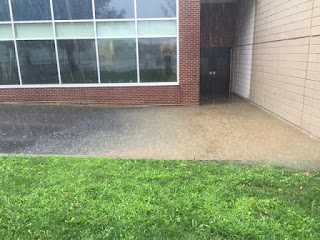 Here, I found, was an entrance on the north side of the performing arts wing that led directly to the wooden stage. The drain that would normally take this water away was overwhelmed and useless. Will the stage be warped by the moisture, and have to be replaced yet again? 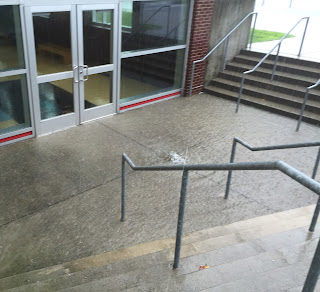 In the middle of this photo, taken nearby at the entryway to the performing arts center, you can see water coming out of the drain, rather than disappearing into it. Overwhelmed, the drains actually begin contributing to the flooding. 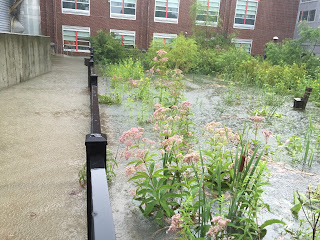 The wetland is in full bloom, and the plants should be fine. Despite their seeming mass, they do little if anything to affect the capacity of the basin, which was not designed to hold water coming in from the street. 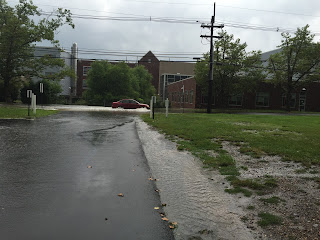 What prevented even worse flooding was the driveway across the street leading into the Westminster property. A PHS science teacher, Tim Anderson, and I had recommended to the school that the curb on the Westminster side of Walnut Street be lowered, so that water, instead of flowing into the high school, could be channeled safely away, 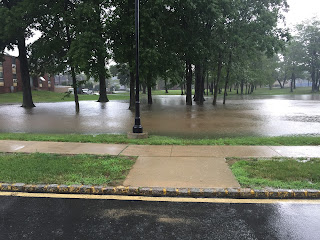 into the Westminster's big field. That field, too, could be planted with beautiful sedges and wildflowers, like the PHS basin/wetland. The field is a designated wetland and cannot be developed, and Westminster Choir College would be motivated to assist, given its periodic use of the high school performing arts stage. 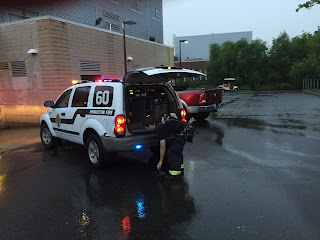 I hope our proposal will now be taken seriously. Risks of PHS flooding would be greatly reduced, and the neighborhood would become even more attractive and colorful. Big storms will bring not emergency workers but neighbors out to see water working its wonders in nature's garden. Work with gravity, work with nature. Please!

Update: The high school's wooden stage did in fact sustain water damage and had to be replaced--for the second time in five years. Here's a widely viewed video of floodwater cascading down into the high school basement.
Posted by Steve Hiltner at Sunday, July 31, 2016