The list of destructive, imported insects affecting Princeton is getting longer. Most people are aware of the gypsy moth and the Emerald ash borer. Add the Viburnum leaf beetle, which skeletonizes Viburnums in people's yards and in the wild. A post in May last year documented the larva chewing on a Viburnum in Princeton's Harrison Street Park. I killed every larvae I could find, and haven't seen a recurrence this year. But badly eaten leaves on a Viburnum in a friend's yard in nearby Lawrence this summer mark a second sighting, this time with damage coming from the adult beetle.

Here's what appears to be an adult on a Viburnum commonly called highbush cranberry. 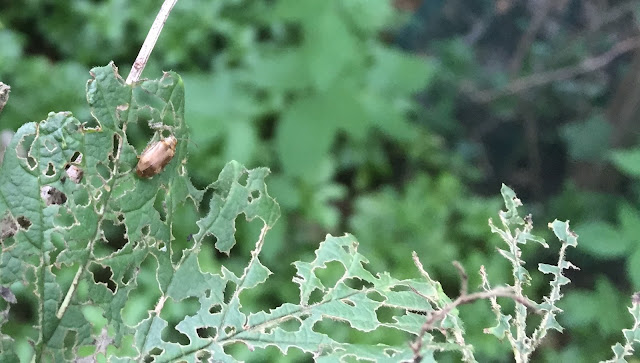 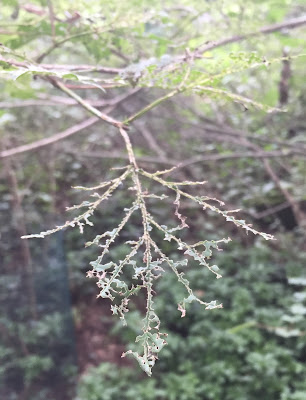 They do a thorough job of it. Completely skeletonized shrubs seen in Pittsburgh years ago were a chilling omen for what could happen throughout the eastern U.S. It should be noted, in this age when so much focus in the news is on intentionally destructive behavior, that the greatest damage to our world is being wrought completely without malice, as insects and diseases hitchhike on transported nursery stock, and the products of combustion slip silently, invisibly from our exhaust pipes and chimneys. 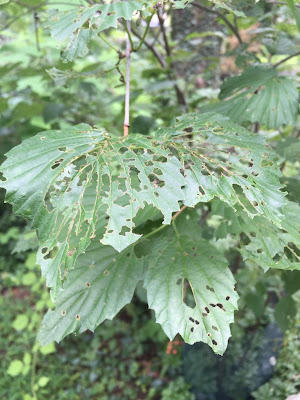 An arrowwood Viburnum (V. dentatum) in my backyard is showing early signs of an infestation. These are two of the most susceptible species of Viburnum. The most striking incidence of arrowwood Viburnum in Princeton is in low woodlands along the DR canal. Despite growing in deep shade, it can have surprisingly showy clusters of white flowers in the spring. Sad to think those spring vistas could become a thing of the past.

If you check any backyard Viburnums you may have and find early signs, you may be able to limit next year's damage with some of the techniques described at this link. 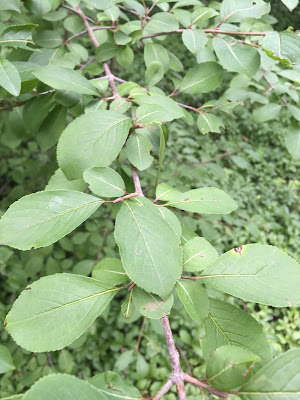 The blackhaw Viburnum, our most common Viburnum in the wild, is less susceptible.
Posted by Steve Hiltner at Friday, August 19, 2016