Two weeks ago, I received an email with the news that the water birds had disappeared from Mountain Lakes Preserve. Might something have been applied to the water to remove algae, with unexpected results, or were geese, ducks and herons simply imitating the general human exodus from Princeton in August? My contacts at town engineering and Friends of Princeton Open Space knew of no chemical applications. 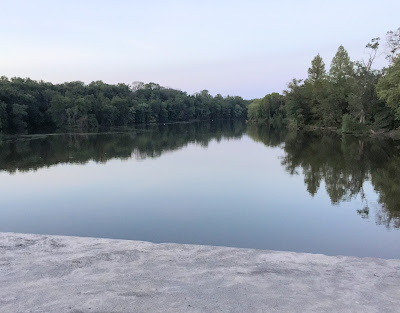 Carnegie Lake, too, was empty of waterfowl, other than a couple great blue herons. One heron flew across the lake, flushed another near the opposite shore, chased it a short distance, then returned across the lake, flying low, its wingtips touching the water. 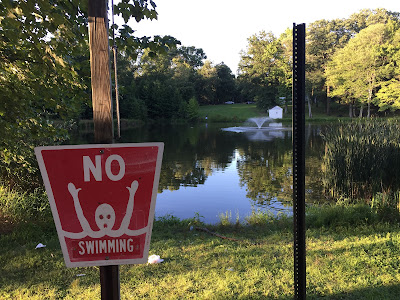 Smoyer Park's pond also was clear of geese. Had they finally taken note of the signage? 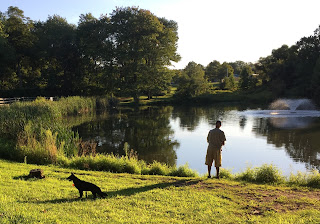 Maybe the fisherman's dog had scared the geese away. 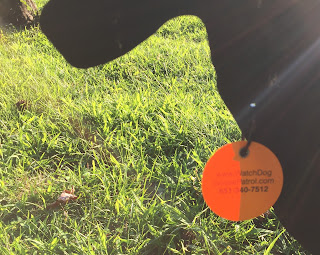 The dog, upon closer inspection, turned out to be 2-dimensional, a metal dog profile placed there by the company contracted to periodically (futily?) scare the geese away. The fake dog looked to be faking out the geese, but the fisherman was skeptical, and told me the geese will soon be back.

Some responses from people in the know, plus some internet research, helped make sense of it all.

"Most waterfowl tend to molt in late summer and are flightless for a brief period of time, during which they are secretive. I've seen typical numbers of geese around locally in the last few weeks; it may just be they've moved of a particular water body in Princeton. Geese will often change habits and feed at night around the full moon. As for herons and egrets, late summer is a time of wandering, where both adults and juveniles will move about from place to place taking advantage of local food sources and concentrations of fish at ponds/lakes with lower water levels."

"as for Herons, I believe they are still able to fly, but just not so efficiently, so they also try to hide out in less conspicuous areas until they have their full set of flight feathers."

That could explain why the great blue heron seemed to be struggling to stay above water, and perhaps it was acting territorially towards a young whippersnapper encroaching on its part of Carnegie Lake.

For those uninitiated in the ways of birds, like me, some general info about molting is at this link. The distinction between the "sequential molt" that most birds undergo, and the "simultaneous wing molt" characteristic of ducks and geese, can be found here.

Thanks to Elliot for alerting me to this seasonal exodus. It would be interesting to find out where the birds go to be safe during molting, and whether it's one place or many.