A Modern Times Moment With Persimmons 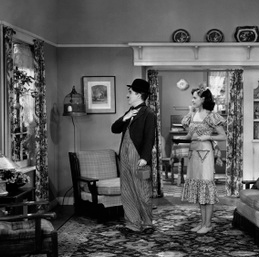 There's a scene in Modern Times where Charlie Chaplin's fantasy of domestic bliss includes reaching out the window to pluck some grapes. A cow comes to the back door to supply milk. Nature is cleverly tended to put its bounty within arm's reach.

I think of that scene every time I bicycle over Princeton University's graceful Streicker Bridge above Washington Road, ever since I noticed some native persimmon trees rising up alongside the bridge. They were planted intentionally, like Chaplin's grapes, and each year they've gotten higher, pressing their leaves and fruits closer to the fencing . 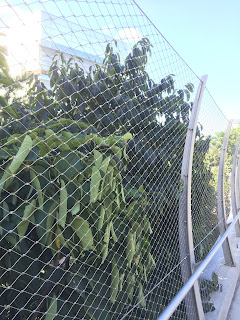 Posts from 2014 documenting the persimmon trees' rise can be found here and here, and a 2015 post is entitled "Close but no persimmon". 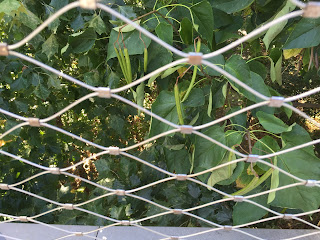 There's a catalpa growing within reach as well, but that's not as appetizing, somehow. 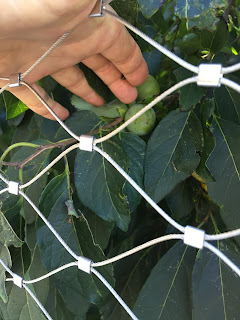 This year, the long awaited casual Chaplinesque reach was finally possible. Heading to a university soccer game, I'd check their progress. 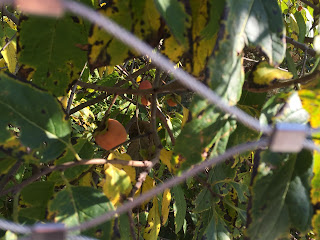 The fencing is a real deterrent, though, as if Chaplin's dream of domestic bliss were set in a high-crime neighborhood where all the windows were barred. 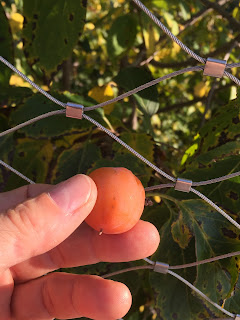 At last, time and fruit seemed ripe. But wait, one problem. It's a persimmon. Can't they be astringent in the extreme? So much expectation, only to have a very pucker-mouthed ride home. 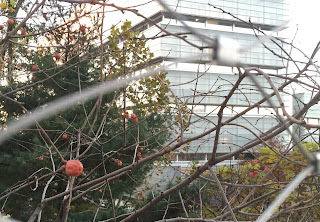 The soccer season passed less than gloriously into history, the leaves fell. A few persimmons remained on the tree, but out of reach. 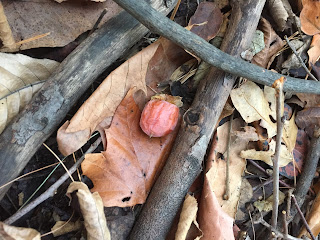 Giving it one last try, I gave up on the fruits coming to me and went down below the bridge to see what lay on the ground. There, preserved on top of a leaf, was one ready to taste. It was sweet, without a hint of astringency, delicious beyond all expectation.

Sometimes dreams don't play out the way you imagined, but they can still come true.