When Vegetables are Stars on the Menu 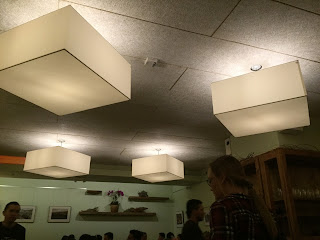 At some point, during a family birthday dinner at Eno Terra, I looked up at the cloudlike lights drifting over the room and asked myself, "When did vegetables become more fascinating and profound than meat?" Everything was delicious, but the vegetables in particular were prepared in such a way that one could take a long pause to savor after each bite.

The experience itself, like the flavors, seemed to resonate far beyond one evening and one meal. Might vegetables--so much easier on the planet to grow--start to take starring roles in our diets, less from necessity or the calls of conscience than from all they have to offer? That possibility has been out there for a long time, but my love of meat has long competed with any ambitions I might have as a plant lover to see plants outshine animals at dinner time. 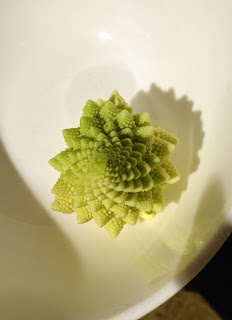 One of the star vegetables that evening was Romanesco--yet another manifestation of that amazing species, Brassica oleracea, from which originated cabbage, broccoli, brussel sprouts, kohlrabi, kale, cauliflower, and others, in much the same manner as all dogs were bred from a single species, Canis lupus. It's fun to think of each of these vegetables as representing an expansion of one particular part of the original plant. Brussel sprouts are lateral buds, kohlrabi is an expanded stem, and broccoli emphasizes the flowers.

Interesting to find out that the original plant in the wild was intolerant of competition, surviving on the cliffs of Dover and other poor soils that discouraged the more rank species that would otherwise shade it out. It was, in effect, one of those rare, seemingly weak, marginal, uncompetitive plants that only a botanist could love, and that much of humanity would dismiss as unworthy of our concern. Now it feeds most of humanity.

Romanesco has a wonderful taste, and can be easily cooked. We've tried it various ways, and actually prefer the simplest means of cooking, in the microwave, in a covered bowl, cut into four pieces with some olive oil and salt. 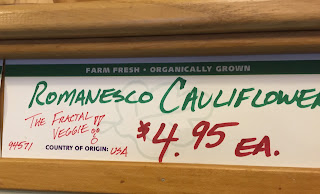 A visit to the Whole Earth Center's produce department got me into a conversation with staff about the mathematical formula that describes Romanesco's spiraled shape. Words like fractal, Fibonacci number, and Mandelbrot set filled the air, making it clear I wasn't in ShopRite anymore. 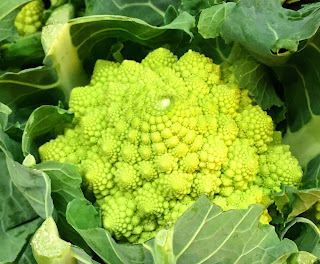 The take-home lesson, along with the Romanesco itself, was that vegetables can dazzle in flavor and mathematically profound shapes. There's an endearing story, a mathematical romance called The Dot and the Line, by the author of Phantom Tollbooth, about a boring line that learns to take on all manner of shapes to wow the dot he loves. She quickly loses interest in the shapeless squiggle she had been hanging out with. If humanity ever got serious about slowing climate change, and a radical shift away from meat spread across the populace, it's good to know we wouldn't need to suffer, and might even come to like it. 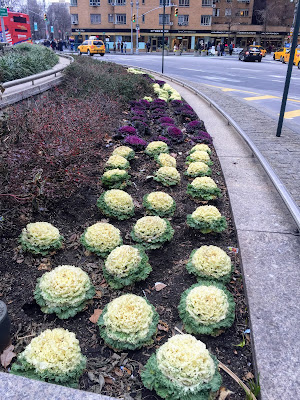 Update: Another manifestation of that renaissance vegetable, Brassica oleracea, on Columbus Circle in NY. Soon, we'll have "cabbage shows" to rival dog shows, as buff cabbages are paraded in front of scrutinizing judges.
Posted by Steve Hiltner at Thursday, December 29, 2016