The stereotype is that "kids these days" tend to stay indoors, discouraged from outdoor adventure in part by woods that have become impenetrable thickets of thorny invasive shrubs. A striking counter-story to that stereotype played out in Princeton's Gulick Park this past summer. Some of Princeton's open space has very little native plantlife on the forest floor, due to past plowing. In areas where the invasive shrubs haven't filled the void, the combination of trees, sticks and empty ground can make an appealing canvas for the imagination--essentially a natural playground for kids. Some schools, such as the Willow School in Gladstone, NJ, and the Princeton Friends School, incorporate natural playgrounds into their campuses. Attendees of the Princeton Environmental Film Festival will remember a wonderful documentary called School's Out about a completely outdoor kindergarten in Switzerland. Princeton's evergreen forest in Community Park North, planted back in the 1960s, was a natural playground until most of the trees blew down during Hurricane Sandy. 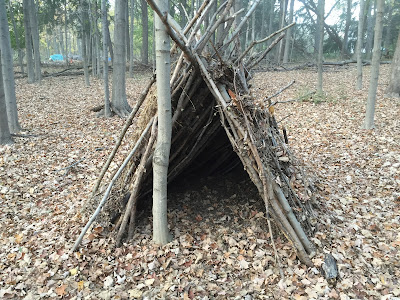 My first inkling that not all kids were spending the summer huddled in front of computers and lounging on sofas with cell phones came when biking through Smoyer Park. There, in the open woods near Snowden Lane and Van Dyke was a shelter carefully constructed out of sticks. The workmanship, or workpersonship, was impressive.

Weeks later, during a nature walk I led through Herrontown Woods, the leader of the informal Friends of Gulick Preserve, Ed Simon, told me of a whole village constructed there by teenage girls. He mentioned Narnia as a possible inspiration. (Update: Though mentions of Narnia are being left in the post, the actual inspiration for this village was other books. See comment below, sent by one of the daughter's parents.)


Here's what I found on a recent visit. There were promising signs of construction along the main drag, a broad trail that extends into the woods from a little deadend fragment of Terhune Rd near Dodds Lane. 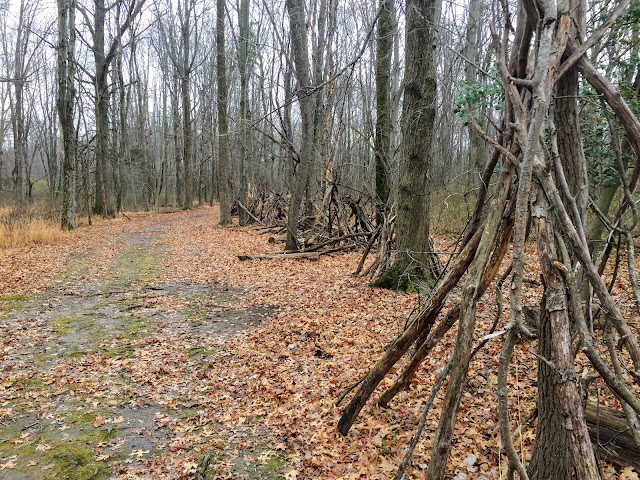 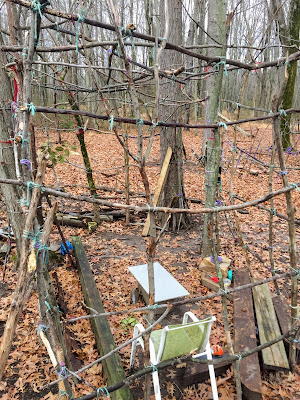 Those lean-to structures are mere prelude to the village further in. Small abodes fashioned of sticks and yarn--shall we call it Yarnia?--stretch along leafy trails that hint at a matrix of streets. Might the streets have names, and if so, would they be like Princeton's tree streets, except that Sweetgum Lane would actually have sweetgums growing along it? Or would the streets have far more fanciful names from some other world entered only through the imagination? 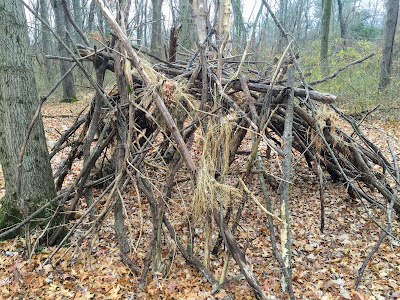 This one reminds me of a shelter that some friends and I made deep in the woods when we were kids. The project ended when my face broke out in a poison ivy rash from digging roots out of the ground to make a nice floor. Poison ivy roots have the same oil as the leaves, apparently. The rash gave me Nixon-like jowls for a week. Still, it's a very positive memory. 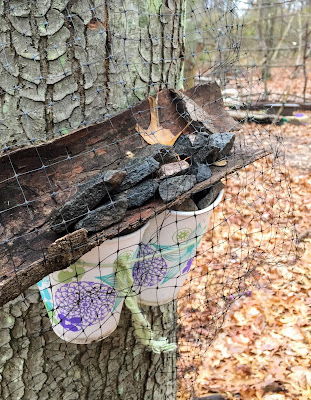 At times like this, it would have been helpful to have read fantasy fiction, to better understand whether these pebbles are a literary quote or, perhaps, some sort of currency for use in transactions with other forest dwellers, with protective netting to keep the Rock Doves from stealing them.

A bit of speculation here, that the village's proximity to Gulick Preserve's pond is not coincidence. Wikipedia tells of the Wood between the Worlds, "a pond-filled forest in The Magician's Nephew (1955), the sixth book in The Chronicles of Narnia by C. S. Lewis. Each pond is a portal that provides instant transportation to a "world" such as ours and Narnia's."

The kids must have been surprised, one fateful day in early September, to step into the pond and be instantly transported to school. 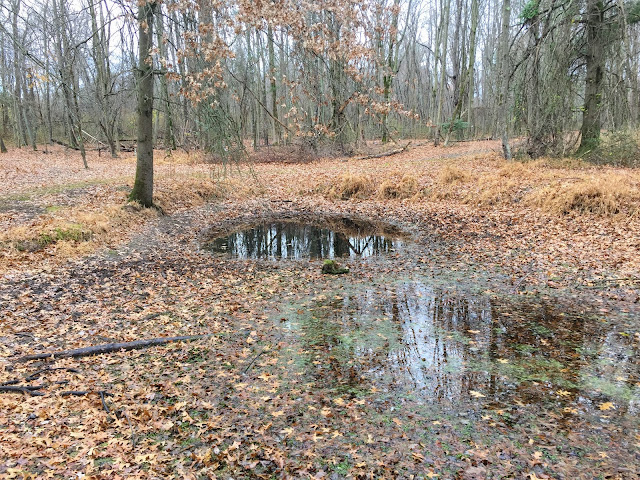