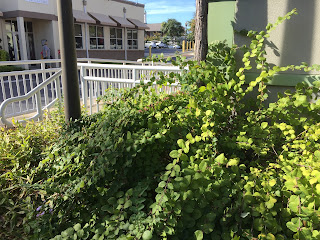 The narrow little raingarden in front of the Whole Earth Center, along the Nassau Street sidewalk, is a bit of an anomaly. It flourishes beyond all expectation and despite several factors that could easily work against it. Portions of it are covered by a canopy, which means those areas receive no rain. And though I weed it periodically, do some thinning and trimming, and clean up any trash that blows in, there are others who take care of it as well. A professional landscape crew comes in each spring and lays down fresh mulch. I see signs now and then that someone on staff is also paying it some attention. That none of us communicate or coordinate would normally lead to problems, and yet it all works out.

There are, too, a few plants in the raingarden that wouldn't normally be considered ornamental. Fringed sedge and deertongue grass are wild natives, and yet provide a look of surprisingly attractive grassy opulence along the sidewalk's edge. And the native coralberry in these photos, taken a few weeks ago, makes a nice mound at the building's corner. 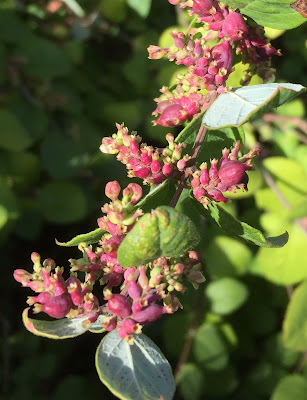 Bees, I discovered one day walking by, take an interest in coralberry deep into the fall. 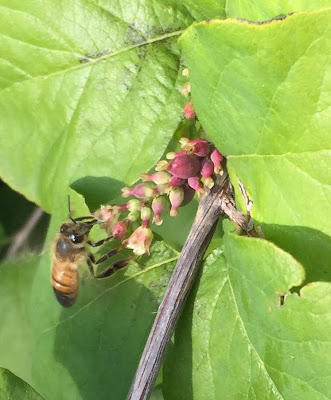 A closer look was rewarded by this scene. Turns out the coralberry has its own brand of commerce--a sort of roadside stand set up in front of the Whole Earth Center, serving organic nectar to honeybees.

It's not coincidental that this native shrub looks reminiscent of the nonnative and frequently invasive honeysuckle shrubs. Both are in the family Caprifoliaceae. Grab your botanical latin books to find out the meaning buried in the scientific name, Symphoricarpos orbiculatus. 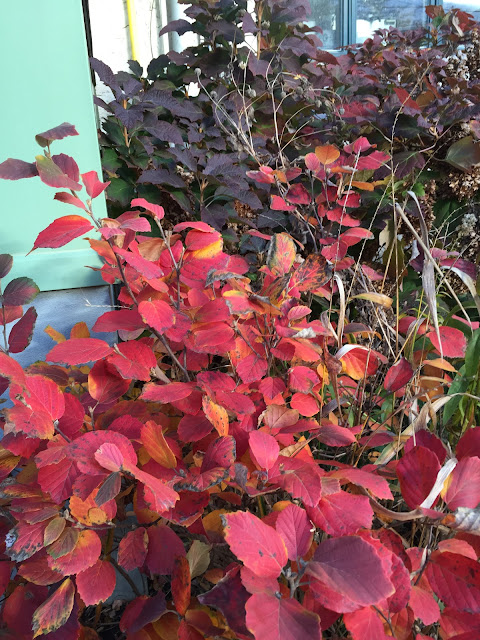 At the other end of the raingarden are the more mainstream native shrubs, favored for the showy flowers and bright fall colors that the coralberry doesn't deliver on. Fothergilla (witch alder) turns brilliant orange, contrasting with the purplish oak-leaved hydrangia behind it.

One nice trait of the corralberry for us lazy propagators is that it makes new plants when its branches touch the ground. Each can be dug and grown into a fullsize shrub. From old raingardens, new ones can be born.