Restoring a Field of Daffodils 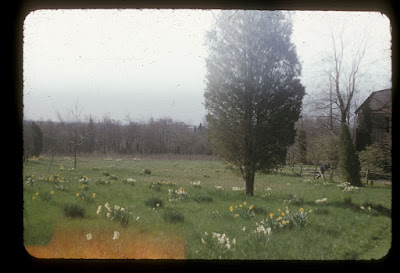 Note: Today, Sunday, April 2, we're having a workday at Herrontown Woods to plant rescued native hazelnuts, local pawpaws grown by my friend Stan, and rescued daffodils. If you happen to be free, join us! Park down the driveway across the street from 443 Herrontown Rd, or walk up from the Herrontown Woods main parking lot. A shovel or fork spade, cleaned of dirt to avoid transporting weeds, would be useful.

There's a tradition of planting daffodils in lawns, shown here in a 1950s photo taken of the Veblen House field. It would be a good guess to say they were planted by Elizabeth Veblen and Max Latterman, their caretaker.

The field is still there, but nearly all of the daffodils are gone. What happened? Mowing is what happened. 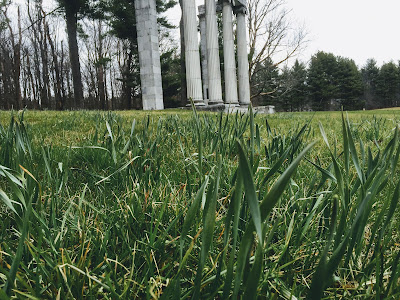 If you mow daffodils after they bloom, before the leaves have absorbed enough solar energy to recharge the underground bulb, you just get leaves the next year. That's what happened at the Princeton Battlefield near the colonnade. If they keep getting mowed too early, year after year, the daffodils disappear altogether. 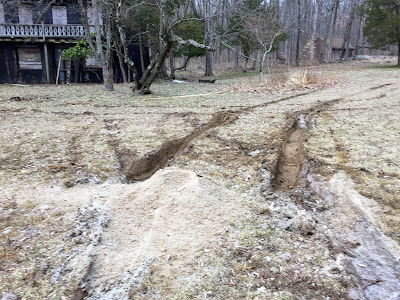 A couple weeks ago, the Veblen field was left deeply rutted by a couple trucks that drove down and got stuck. The trucks may have been driven by workmen hired by Mercer County. Some road salt was spilled in the lawn. In a highly symbolic act, we'll be bagging up the salt for disposal, and planting the ruts with daffodils rescued from a construction site nearby. The next step after that will be an act of not-doing, i.e. keeping the mowers away from this part of the field.
Posted by Steve Hiltner at Sunday, April 02, 2017