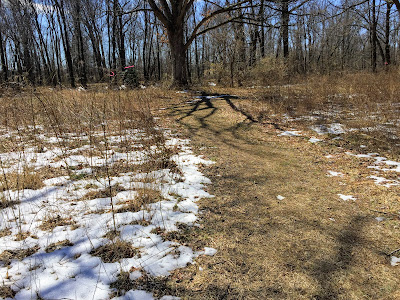 After the improbably hot days of February, the slow fading of March snows back into the ground in lingering cold are reminiscent of childhood winters in Wisconsin. Following the snowbound months came a long, slow thaw, a gradual yielding of winter's icy grip that quickened my step and made me reach for my golf bag, to get in early practice on Yerkes Observatory grounds. Often, the ball's trajectory sent it into a lingering snowdrift. I would extrapolate from the entry hole where the ball might be hiding its white in white. 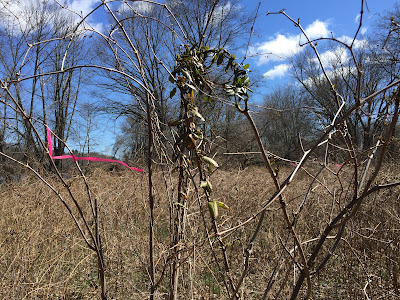 From the joy of that slow thawing may have grown a pleasure in incrementalism, which has informed much of the habitat restoration work I do in town. The nature loop that branches off the towpath along the DR Canal near Harrison St. has been getting some incremental upkeep lately. Alerted by the DR Canal State Park ranger that they would soon do the annual mowing of the field the trail winds through, I went out and marked the elderberry bushes with bright pink tape. The idea is that the mowing crew will steer clear of the marks, allowing the elderberries to bloom and have berries. As the photo shows, though, the invasive porcelainberry and Japanese honeysuckle vines are using some of the elderberries to climb up and grab the sunlight. 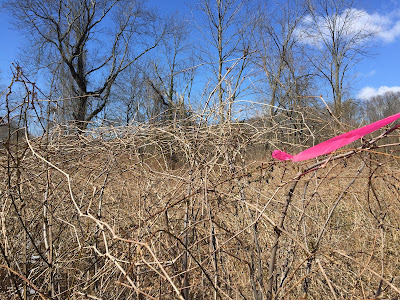 How, then, to let elderberries be elderberries, rather than mere superstructure for an overly rampant nonnative vine? The rampancy of the vine, as with many introduced species, comes from the lack of a countervailing force of consumption to curb their growth. In other words, nothing eats them. Incrementalism means first insuring the elderberries don't get mowed to the ground, then contemplating the next step to take. It might seem a bother to clamber through thorny brambles to mark elderberry bushes only to have them mobbed by vines, but growing up close to the land can make that steady spring thaw of optimism run deep in your blood.

The nature trail loop is a nice wide trail, between the canal and Lake Carnegie, maintained by the NJ state park staff.