Stalking Monarchs, and Encountering the Other Milkweed Caterpillar

Note: This post serves as a contrast to the horrific flooding in Houston from Hurricane Harvey, showing how stormwater can drive diversity rather than destruction, if we work with nature rather than against it. Unlike cities, the plants that grow in floodplains are built to pop back up within days or hours after a flood and just keep on growing and flowering. Most of these photos were taken in a detention basin, which is an acre-sized depression in the ground, dug to receive storm runoff from the Smoyer Park parking lot. The purpose is to "detain" the rain that hits the asphalt and that would otherwise rush into the nearby stream. Detaining the water reduces flooding in downstream neighborhoods. The detained water then either seeps into the ground or is slowly released through a small pipe into the stream after the floods have receded.

Last year, a collaboration of federal and local governments with the Friends of Herrontown Woods converted this mowed basin into a wet meadow with floodplain plant species that thrive with these periodic pulses of runoff. Without regulations requiring it, the concave setting for this lovely oasis for native plants and pollinators would not exist, and the polluted runoff from the parking lot would have flowed straight into the local stream, contributing to flash floods. 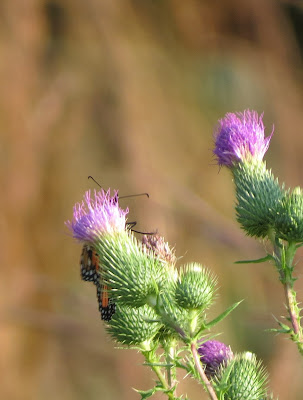 Nature has offered up some surprises, here in the doldrums of summer, when people who aren't somewhere else sometimes feel like they should be. There was the unexpected, and unexpectedly affecting, chance to capture family portraits of black vultures in the previous posts; the weather has been unexpectedly cool; rains have come when needed for the third year in a row, and monarchs have proved resilient, rebounding from their diminishing numbers in recent years. Not many, as yet, but more.

Thinking them elusive creatures, I figured a zoom lens was necessary to capture their image. First came a peekaboo shot on the far side of a thistle at the Smoyer Park detention basin that we converted last year to (mostly) native meadow. 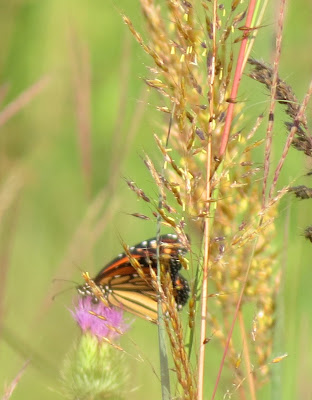 The blooms of Indian grass got pleasantly in the way of this shot. 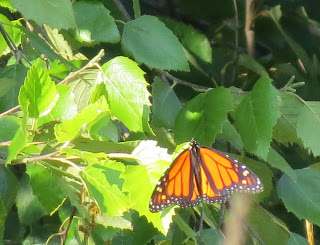 With nowhere else to go in a sea of soccer and baseball fields, the monarch kept circling around the planted meadow, encouraging patient waiting for a chance at an unobstructed view. Finally, a clear shot from 100 feet away, while it perched briefly on a river birch. Congratulating myself on some success with a powerful camera, I plunged into the meadow to weed out a small clump of foxtail grass that would become way too numerous if allowed to go to seed. 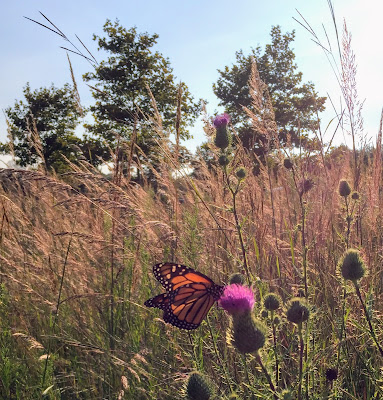 And there, five feet away from my tugging and clipping, landed the monarch, easily photographed with an iPhone, 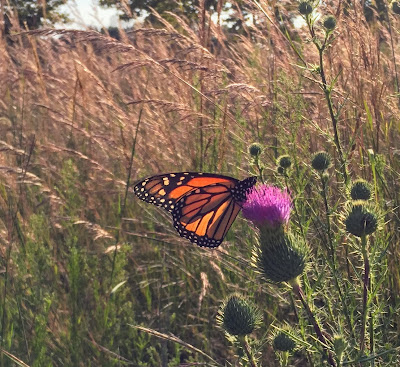 with a coppery background of Indian grass. That's what weeding a wild garden does--it immerses the gardener, creating opportunities for serendipity to work its magic. 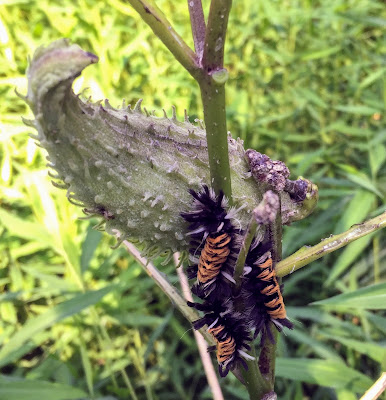 Just across Snowden Lane from the park, behind Veblen House where our Friends of Herrontown Woods group has fashioned a clearing by removing invasive shrubs and wisteria, another sort of caterpillar munched on the leaves of common milkweed, which has prospered in the resulting sunlight.

Displaying proper Princeton colors, the milkweed tiger moth needed every milkweed plant there, and then some. We came back a week later and found every milkweed stripped down to bare stems. The common milkweed's strategy of aggressive underground spreading becomes more understandable, given the voracious appetites of these caterpillars. 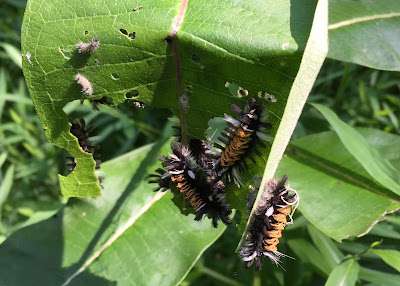 Also called the milkweed tussock moth, the caterpillars become more colorful as they grow. As an adult moth, they are said to retain the cardiac glycosides they pick up from eating milkweed, and warn bats of their unpalatability by emitting a click as they fly about at night. 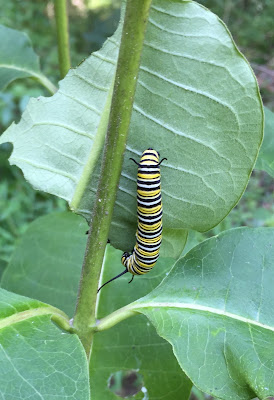 With summer almost over, a first sighting of a monarch larvae--on a purple milkweed, of which there are very few in Princeton, for some reason. Common milkweed can be a bit too aggressive in a garden, and swamp milkweed disappeared from our garden after a few years. Purple milkweed with its showy blooms may be a good alternative, if we can find any seed after the hungry caterpillar is done.
Posted by Steve Hiltner at Friday, September 01, 2017