With Trees, Looks Can Be Deceiving 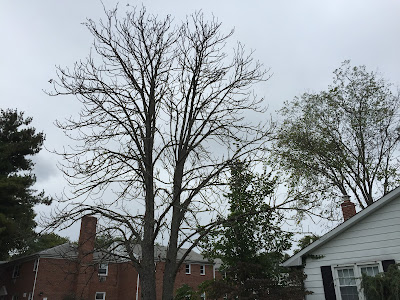 Here's a tree that looks dead, but is probably okay. It's a horse chestnut--a species long associated with historic houses, and like many horse chestnuts lost its leaves early, perhaps due to a leaf blotch fungus. Though planted in front of a newer home, its history is connected to the 18th century house around the corner, once lived in by Joseph Stockton and, reportedly, an occasional sleeping pad for Thomas Jefferson. 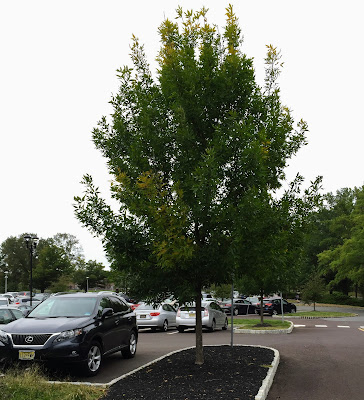 And here's a recently planted ash tree a few blocks away at the Westminster parking lot, looking good but not long for the world, due to Princeton's ongoing Emerald Ash Borer invasion. When I saw that ash trees were planted as part of the parking lot expansion, I urged Westminster to get the designers to pay for replacements that would actually live long enough to shade the cars parked beneath them. Hoping I'm wrong about it all, but any followup photo a few years from now will likely show a gap where this tree now stands.
Posted by Steve Hiltner at Friday, September 22, 2017