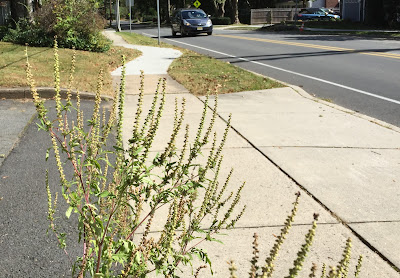 One native plant that people suffer from allergies in late summer may be less than thrilled about is ragweed (Ambrosia artemisiifolia). Its flowers are green--there being no need to attract pollinators since it spreads its pollen by air. This solitary plant was found on Hamilton Ave, but a much larger source of all that pollen is nearby. 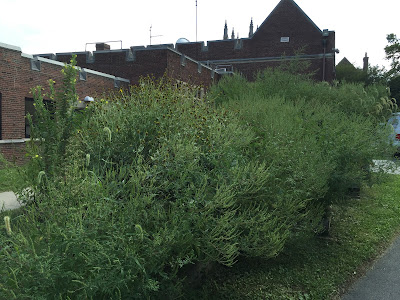 Gardeners sometimes get the urge to plant gardens on school grounds, but followup tends to get iffy during summer vacation. Thus, many of the 13 or so raised beds at the Princeton High School fill with weeds during the summer, and ragweed is one of the more stellar performers, acing the grab-the-sunlight test. 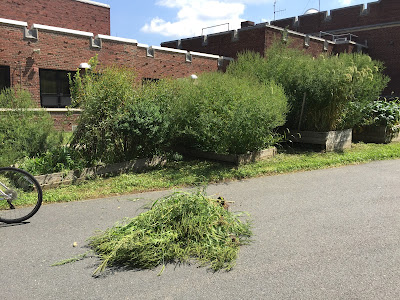 My younger daughter and I planted one of the beds with native wildflowers--cutleaf coneflower, New England aster, late-flowering thoroughwort--as a sort of mid-summer charging station for pollinators. These species are no shrinking violets, but even so, a late summer weeding yielded a considerable pile of ragweed, etal. 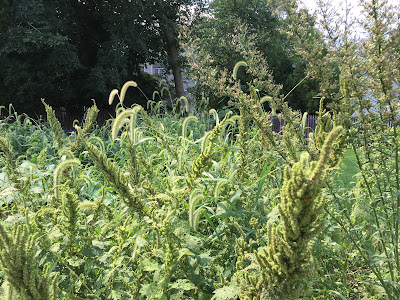 If you're lucky enough not to suffer from fall allergies, it's possible to admire the sheer exuberance of the weeds in these beds: pigweed, horseweed, foxtail, and, alas, ragweed.

Might the fall allergy sufferers in the PHS neighborhood proactively organize to weed the raised beds before the ragweed's flowers mature? Something for someone to put on their digital calendar for next year.
Posted by Steve Hiltner at Sunday, September 24, 2017