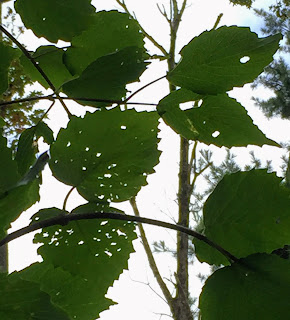 This fall, before the leaves fall off, check any Viburnum shrubs you know and love, whether in your yard or in your favorite nature preserve. Do the leaves look like this, pitted with holes, or even stripped down to the veins?

Most people have heard by now about the Emerald Ash Borer's rapidly multiplying demolition of our ash trees. Lest that devastation not be enough ecological and horticultural tragedy to absorb, there is another invasion underway in Princeton, by the Viburnum leaf beetle. This one--a European insect that first showed up in Canada before spreading to the U.S., is going after our understory, one Viburnum species at a time. 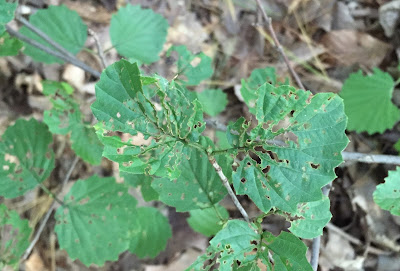 This and the above photo are of Viburnum dentatum, the arrowwood Viburnum, which grows here and there in our woodlands, preferring wetter soils. The light damage could have been done by a native insect, or by the first few Viburnum leaf beetles to show up, suggesting much greater damage the next year. Listed as "highly susceptible" on Cornell's website, the arrowwood Viburnum will be the first to succumb. 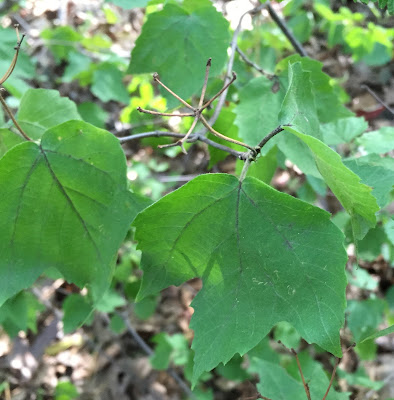 The maple leafed viburnum, frequently encountered along the Princeton ridge, is less susceptible and thus isn't showing any damage this year. As the Viburnum leaf beetle increases in numbers and exhausts the most susceptible species through complete defoliation, it will presumably begin attacking those that are less susceptible.

We are not completely helpless as yet another careless introduction to the continent wreaks slow motion havoc. This site offers some ways to prevent the beetles and their larvae from consuming your favorite specimens. As with all environmental damage done, the ecological and aesthetic services these shrubs were providing for free will now start coming with a price tag for human maintenance.

The Cornell site offers another ray of hope. An extension official in Rochester, NY asserts that even highly susceptible species may in the long term become viable again, as predatory insects and soil nematodes build up to prey on the Viburnum leaf beetles. Then, perhaps, the introduced species would come into some sort of ecological balance, doing some damage but not enough to kill the Viburnums.

It's a perfectly logical and reassuring scenario, and yet observation often brings into question the speed and effectiveness of nature's capacity to restore balance and sustain diversity. More often, invasive species remain dominant and destructive, be they Phragmitis, or Japanese stiltgrass, or porcelainberry. I called up the Frick Park Environmental Center in Pittsburgh, where I had first witnessed the devastating impact of Viburnum leaf beetle a decade ago. Asked whether they had seen any signs of balance being restored, they answered, "Not yet."

The Pennsylvania extension service also has some useful information.

Past NatureNotes posts about the Viburnum leaf beetle, dating back to 2013, can be found here.