If you encounter a book or article that claims that, surprise!, invasive species aren't such a big problem after all (a few were written over the past decade), you'll probably find no mention of herbivory. They'll say that invasive plants are being falsely maligned, because actually they do wonderful things, like provide berries and nectar for wildlife. But it's to the plant's advantage to have its flowers visited and its berries consumed. What the plant doesn't "want" is to be eaten, and therein lies the problem with plants that become invasive. For whatever reason, be it an invasive's chemical defenses or ingrained dietary habits, the wildlife tend not to eat them.

Nature depends on consumption to keep things in balance. We love nature for its beauty and variety, but behind the scenes there's a whole lot of mastication going on. Take away predators and the deer population explodes. Introduce a new plant that the wildlife won't eat, and there's potential for that species to make habitat less and less edible as it displaces the natives. To fill this void in consumption, people have had to play the role of herbivores. What we do at Herrontown Woods, as we cut down dense groves of winged euonymus and other nonnative invasive shrubs, is to play the role of the missing herbivores, using our loppers for teeth.

There's some pleasure in the work--pleasing vistas created, serendipitous discoveries. But all things being equal, it would really be nice if the resident wildlife could show some flexibility in food preferences and fill the void in consumption. Invasives, after all, represent a huge, untapped food source for any animal willing and able to broaden its palette.

Given how much work it would be for humans to play the role of herbivores in the forest, any evidence of wildlife gaining an appetite for invasive plants stirs some hopefulness. 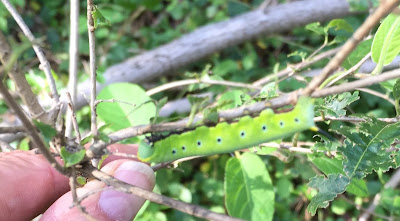 For instance, an invasive honeysuckle shrub was recently found stripped of its leaves. A closer look revealed something had been hard at work, its mandibles outshining our loppers: the caterpillar of a snowberry clearwing moth, also known as the "hummingbird moth" or "flying lobster", for its capacity to hover in front of flowers as it sips their nectar. Maybe if we had more summer wildflowers for the adult moths to feed from, their caterpillars would help control the populations of bush honeysuckle in Princeton's preserves. Nice to think, anyway. And what's this orange plant growing on a dense expanse of invasive mugwort that grows as a monoculture along the gas pipeline right of way in Herrontown Woods? Dodder is a parasitic plant with little capacity to gather energy from the sun. Instead, it wraps itself around other plants and sucks out their juices. 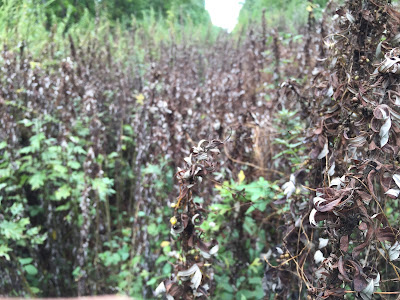 Usually, its impact is small, but this must have been a particularly good year, because a sizeable patch of mugwort was sucked dry.

If only we could get the dodder (genus Cuscate) to preferentially neutralize the mugwort all along the right of way, some diversity might return. Again, a nice thought and tall order. 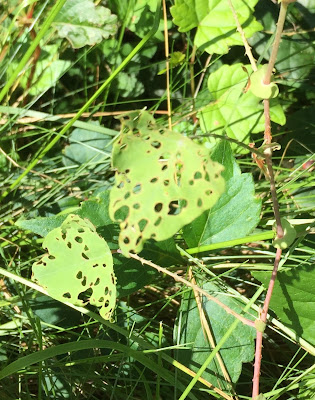 A new invasive trying to gain a foothold in Princeton is mile-a-minute vine, with a distinctive triangular leaf, a prickly stem, and a growth habit to match its name. Another post shows how invasive this annual vine can be , on farms just outside of town. Fortunately, after weeding out a small population back in 2007, I know of only two patches currently growing in Princeton, still small enough to control and hopefully eliminate altogether.

One's at the Princeton Battlefield. This year's growth was pulled out in early summer, and when checked in late August, the patch had only managed to produce a few leaves, all of which were being very effectively munched on by a weevil intentionally introduced to the U.S. to bring this rampant new species under control. 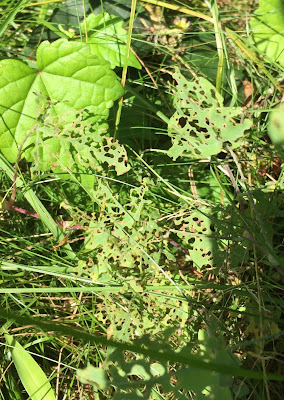 Ah, I concluded, to control mile-a-minute vine, simply reduce the patch in early summer, leaving enough for the weevils to sustain their population on. Their appetites appeared to be sufficient to prevent any flowering or fruiting that could lead to the patch spreading elsewhere. 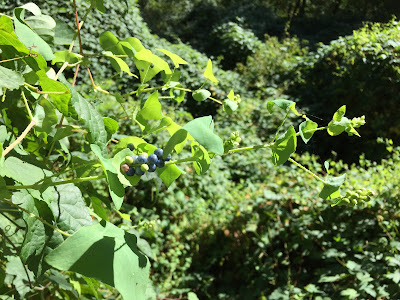 Nice concept, but it wasn't working at the other site, down along the driveway into Rogers Refuge, where the vine had sprung back up, flowered and fruited, undeterred by the minor nibblings of the weevil. That patch had to again be pulled out by hand. 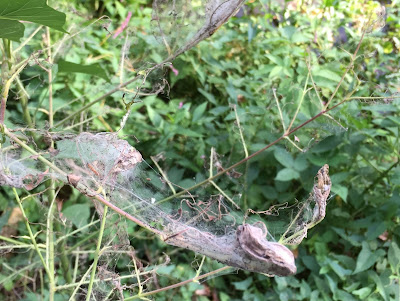 Another discovery was the work of the Ailanthus webworm moth, which had completely defoliated a young tree of heaven near the parking lot of Herrontown Woods. The moth, like the tree, is an introduced species. 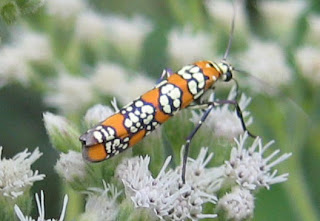 If you have flowers like boneset growing in your backyard, you may be helping the adult moths to prosper.

Here again, though, the larvae have thus far been seen only on very young trees, with larger ones largely left untouched.

These are glimmers of hope, sprinkled across Princeton. It will take some concerted mastication by as yet unnamed herbivores to stem the tide of rapidly spreading species like porcelainberry, callery pear and stiltgrass--a giant uneaten salad that grows by the year. A little salt and pepper, perhaps?