Cleaning Yards AND the Street

What to do with the leaves? For years I've been encouraging people, with everything but bribes, to compost their leaves rather than dump them in the street. The Princeton Environmental Commission has long been advocating a "leave the leaves" approach. I'd like to think that people are listening, and telling their landscapers they don't want a mess on the street in front of their houses. But one can still get the feeling of Groundhog Day when walking down the street, with big pillowy piles of leaves rising in the same places year after year, forcing cars and bikes, and sometimes pedestrians, out into the middle of the road.

For some, loose leaf collection is a sign that their tax dollars are being spent on services. For me, it's a classic example of how a private problem is unnecessarily dumped into the public's domain. An example with more global consequence is what happens every time we drive, and every time the furnace kicks on. We as private citizens get the benefits, while the atmosphere and future people get the burden. I can't capture and reuse the CO2 slipping out of tailpipe and chimney, but I can easily compost leaves in a back corner. The pillowy massiveness of leaf piles is deceptive, easily tamed and compacted by the weight of rain and snow. 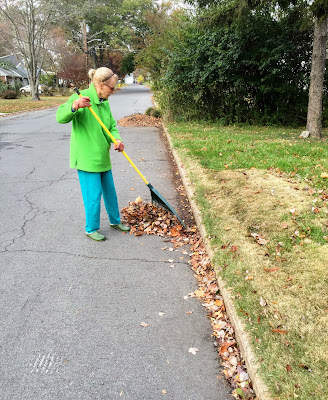 Recently while walking the dog, I happened to encounter three kindred spirits--formerly unknown neighbors who take pride in the look of the street in front of their homes. This woman on Stanley rakes up the leaves and adds them to a leafpile in a back corner. The leaf pile doesn't get oversized because the previous year's leaves have already returned to the soil. 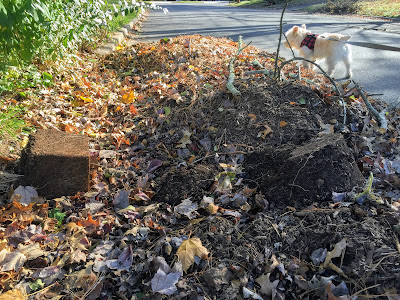 By contrast, and much to her annoyance, a landscaper for a neighbor across and up the street dumps leaves, sticks, soil, whatever, next to her property, oblivious to regulations and scheduled pickups. It's essentially a compost pile in the street.

Another landscaper for a neighbor of her's, facing Hamilton Ave, decided one day to do a leaf drive across the road, blocking Hamilton when I happened to be driving by.

These folks have plenty of room in their yards for a leaf pile, but the landscapers instead direct the leaves into the street for the same reason so many other problematic things happen, because they can. 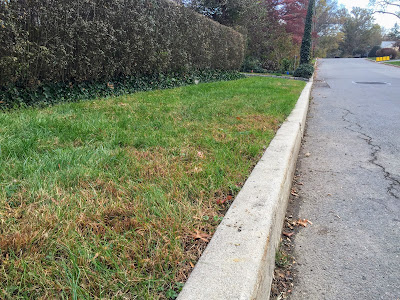 Here's another neighbor who extends his sense of aesthetics and responsibility to the curb. He was raking even though his doctor recommended against it. That shows how strong the urge can be. 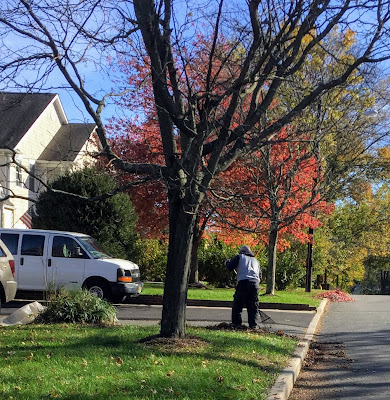 And just up the street, another neighbor who rakes leaves out of the curb and puts them on a leaf pile in the back. 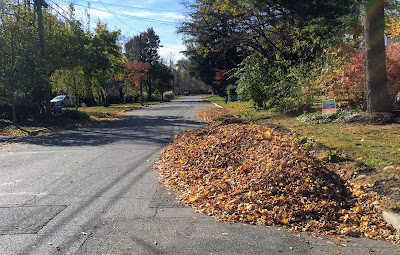 His pet peeve is all the leaves that blow into his yard from the big leaf piles nearby neighbors put out on the street.

Interestingly, two of these neighbors have foreign accents, suggesting they have brought with them an ethic of stewardship for public space that isn't as strong in the U.S. 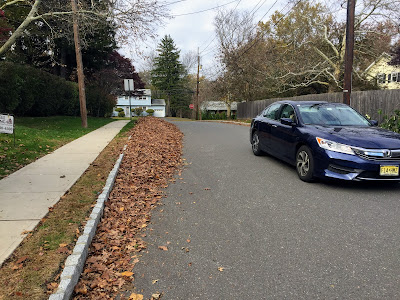 Sometimes, leaf piles constrict the road in areas where visibility is limited, such as at Van Dyke and Grover. 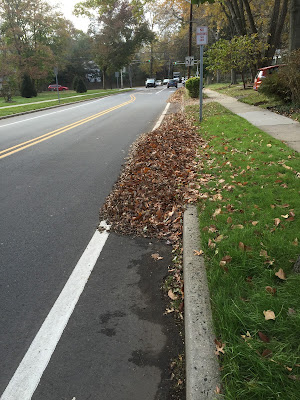 And this is what bicyclists face, losing their bike lanes for much of the fall. 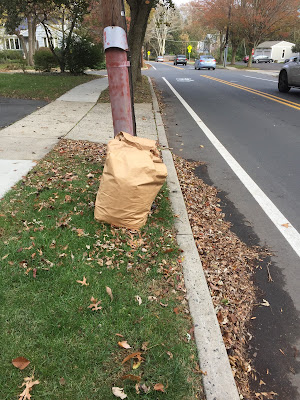 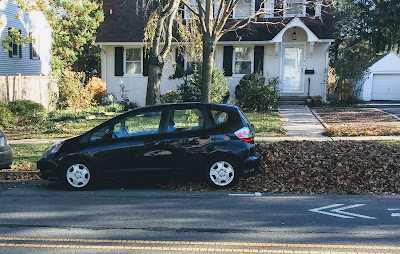 Here's the classic problem in the downtown area, where leafpiles occupy parking spaces, and people are tempted to park on top of the leaves, with the risk that a hot catalytic converter could start a fire underneath the car.

It's estimated that leaf and brush collection costs the town somewhere between $500,000 and a million dollars per year. One way to shift towards more efficient, containerized collection and backyard composting would be to provide yardwaste carts to interested homeowners who live on busy streets, or where parking is important. These would augment the yardwaste bag collection, with more capacity and ease of use. The approach is spelled out at this link.  If given some incentive, homeowners who live where piling in the street is particularly inconvenient or perilous might gain the same ethic that my three neighbors have shown, and begin taking pride not only in their yards but their curbs as well.

In my own yard, I use several Wishing the Earth Wells, a homegrown invention that looks like a wishing well but composts leaves, with a critter-proof cylinder in the middle for food scraps. Add a leaf and make a wish. Some leaves remain on the ground in the flower beds, protecting the soil and providing cover for pollinating insects to overwinter. Nature works in cycles, and working with nature to maintain those cyclings of nutrients just happens to reduce my need for town services.

Once the urge to utilize rather than expel kicks in, all of this becomes second nature, a pleasure rather than a burden. It was heartening to meet kindred spirits in the neighborhood, people who are hardwired to value the public space in front of their homes, and not reject nature's gift of leaves.
Posted by Steve Hiltner at Sunday, November 19, 2017