If you've noticed more deer this year, it's partly due to this past winter's deer hunt not having gone so well. Princeton began hiring professionals to cull the deer herd back in 2000. Though subject to passionate protests at first, the program has proven to be the only way to restore some ecological balance, given that natural deer predators were long ago eliminated from our area. The benefits of the program are described in a 2011 piece I wrote for the Princeton Packet.

Deer greatly reduce homeowners' options for landscaping, but their biggest impact is on nature preserves, where they preferentially consume native plant species. Over time, invasive nonnative plants take over, creating a forest understory largely inedible for deer. Reducing deer numbers reduces the browsing pressure on native plants, allowing them to compete more effectively with the invasives, thereby creating better habitat for all the wildlife that depend on native plants, including deer. A 2012 post on the revival of spicebush in our forests is representative.

Town data maintained by the animal control officer shows the dramatic rise in deer numbers from 1970 to 2000, and how annual professional hunting dramatically reduced deer numbers and related traffic accidents. By keeping the deer herd smaller, the town has actually cut in half the overall number of deer killed each year by hunting and cars. Bow hunting alone is insufficient to control deer numbers, as the town discovered when it tried going without the services of the professional firm, White Buffalo, in 2011. The cost is around $60,000, which begins to sound like a good deal when one considers the reduced auto accidents, potential for reduced incidence of Lyme, and the reduced browsing pressure on nature preserves and homeowners' yards. The venison is delivered to food kitchens.

Annual bow hunting, as the flyer below explains, began October 7 and continues through Feb. 17, 2018. Bow hunting is done by volunteers who, I believe, are vetted and their efforts coordinated. No bow hunting is allowed on Sundays and between 9am and 3pm on Saturdays.

This past winter, professional hunters began culling in mid-February, but unusually warm weather greatly reduced their effectiveness, since the deer were not concentrating the way they do in colder weather. White Buffalo was only able to cull 63 deer--half the number culled the previous year, which in turn was half the number culled in 2015. The hunt was further hampered by the lack of an Animal Control Officer, who would normally assist in various ways.

Thanks to Princeton council member Heather Howard and assistant town manager Jeffrey Grosser for some of the information used here. 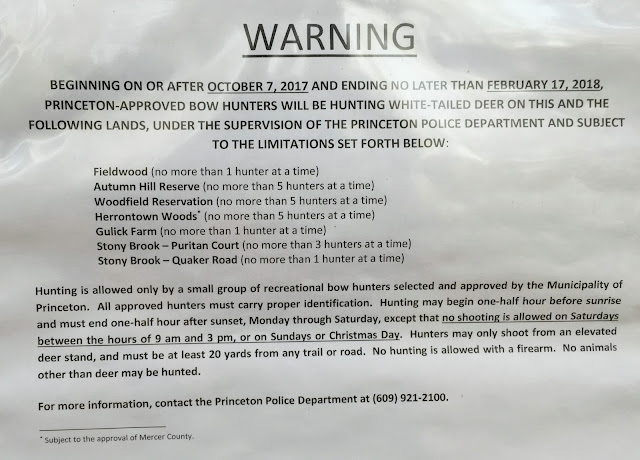