Lesser Celandine Spreads Through the Neighborhood 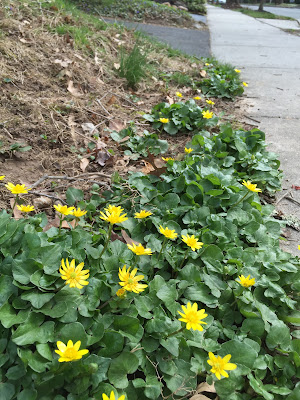 It sure is pretty, but beware. It will take over your garden and your lawn. Too much of a good thing--it's the dominant story of our time, whether it be carbon dioxide in the air or a pretty wildflower spreading along the curb.

Lesser celandine (Ficaria verna), also called fig buttercup so as not to confuse it with the native celandine poppy, has essentially paved whole valleys. It's poisonous, and no wildlife have adapted to eat it, giving it a big competitive advantage. The most dramatic local examples are in Pettornello Gardens over at Community Park North, and downstream areas in Mountain Lakes. I've been watching it spread into the neighborhood one block from my house. Homeowners think it pretty at first, then feel distress at its aggressiveness.

Best to knock it out when it first arrives, with 2% glyphosate (wetland-safe formulation recommended when close to streams and wetlands). Digging it out is fraught with risks, as it spreads via small underground tubers, and probably via seeds as well.

Visiting my former home in Durham, NC, some years back, where it has only recently appeared, I found it growing in a couple adjacent yards, poised to spread via runoff into the local watershed. We asked the homeowners for permission to knock out the infestation. One neighbor agreed, while the other refused, indifferent to the impact her infestation would have when it inevitably spread beyond the boundaries of her yard. I had tracked another infestation elsewhere in Durham back to a homeowner's yard. He was grateful to find out what the plant was, and promptly eliminated it, as well as some he had given to his daughter in yet another watershed, thinking it was pretty.

These sorts of experiences put the lie to allegations that invasive plants are already so numerous that it's not worth trying to stop their spread. On the contrary, these plants' negative impact can be greatly reduced at the local level through timely action.