Why Do My Nursery-Bought Rhododendrons Languish? 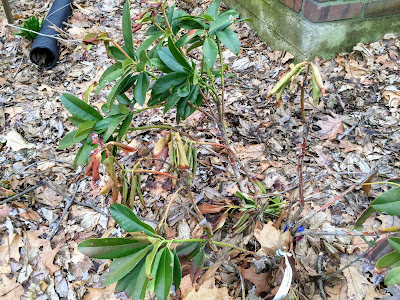 My wife loves things that are beautiful and special, and Rhododendrons are one of them. So periodically we buy one at a local nursery and plant it in the yard, and each time the Rhododendron languishes and ultimately gets pulled out. What's going on? Soil not acid enough? Poor drainage?

Meanwhile, the rhododendron that came with the house thrives under a red oak near the driveway. 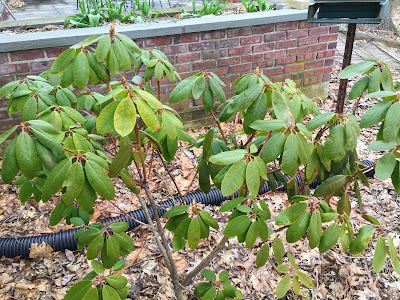 This past summer, a developer allowed me to dig up some plants from the foundation of a house he was going to demolish. One was a Rhododendron, which came home with the small knot of roots I managed to dig up. Having transplanted it while it was in bloom, I had no expectations that it would survive, and yet it survived the summer, and now has survived the winter far better than a nursery-bought Rhododendron we planted around the same time.

(There's a downspout in the vicinity, which could potentially make the soil too wet, but it's leaky and probably affects both Rhododendrons equally, and other store-bought Rhododendrons have languished far from any runoff from the roof.)

Might the Rhododendrons available in local nurseries be bred to look good in pots rather than prosper in a typical garden? That's the working hypothesis here, that the sorts of Rhododendrons bought and planted in the 1960s may have been better adapted for gardens, but don't look as good in pots at the nursery, and so couldn't compete with whatever fragile varieties are commonly sold now.
Posted by Steve Hiltner at Saturday, April 14, 2018