My Letter About Rachel Carson in the New Yorker Magazine 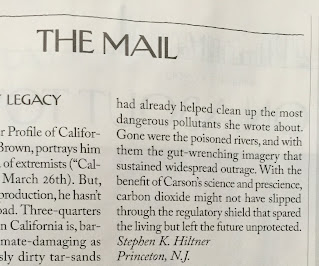 The New Yorker published a letter of mine, responding to their beautiful article by Jill Lepore on Rachel Carson's writings about the sea (A Critic at Large, March 26th). Those books written earlier in Carson's career were largely forgotten after her earth-shaking Silent Spring came out in 1962, but they were some of the first books on the environment I read. My environmental awakening came during a quarter-long environmental field trip to Georgia and Florida during my second (and last) year at Antioch College. The trip included two weeks at a research station on Ossabaw Island, off the coast of Savannah, Georgia. There I read Carson's descriptions of Spartina salt marsh grasses, swatted mosquitoes while learning to improvise melodies on clarinet, and discovered in my self-directed ramblings and research the elegant adaptations pine tree species have evolved to periodic fire. The discovery began with an observation and a question: Why are the pine forests burying themselves in a deep mulch of pine needles, through which no new tree could possibly sprout? The answer, that the trees had co-evolved with fire to such an extent that they could no longer thrive without it, revealed in the woods around our cabins an unexpected depth and elegance in nature that I surely was encountering in Rachel Carson's writings at the same time.

The New Yorker had to shorten my letter considerably to fit it in. Here's the original version:


Jill Lepore's The Shorebird, about Rachel Carson, sent me into a deep inner stew for a day, ending as it did with a "what if". Had Carson lived long enough to write the book she contemplated about rising seas and changing climate, might it have landed in bookstores at the right time, with the right imagery to dig deep into people's minds and hearts?

By the time global warming finally gained widespread attention, 25 years later during that overheated, drought-stricken summer of 1988, regulatory successes had already cleaned up the most viscerally irritating pollutants. Gone were the burning river and the sulfurous clouds of purple and pink that swept like midday sunsets over urban areas in Carson's time, and gone with them were the gut-wrenching imagery and noxious smells to sustain broad-based outrage. With her science and prescience, carbon dioxide might not have slipped through the regulatory shield that rose to spare the living while leaving the future unprotected.

In this time, when women, diverse shades of race and gender, and now youth, are finding their voices, nature remains forever mute, requiring our empathy, humility, and keen observation to discern its needs and our utter dependence upon it. Carson spoke up for this most creative, most giving, and most abused entity. She found the words to make the earth shake and sing within us.