In Memory of a Man Who Maintained a Nature Trail

This post is dedicated to the memory of Henry Tuliszewski. I never met him and just learned his name, but for years he made possible my and others' enjoyment of nature down along Carnegie Lake. A resident of Princeton, he was the man who remembered to mow the nature trail loop that branches off of the DR Canal towpath near its Harrison Street crossing.

A recurring theme on this blog is the importance of something that too often goes unsung: the ongoing maintenance that quietly sustains the quality of and access to urban nature. We tend to take many aspects of civilization for granted, but nothing lasts without care, and the same pertains to natural areas whose balance often now depends on human intervention. Many examples have been given here, of how interventions that are minimal, yet strategic and informed can sustain beautiful, diverse habitats. 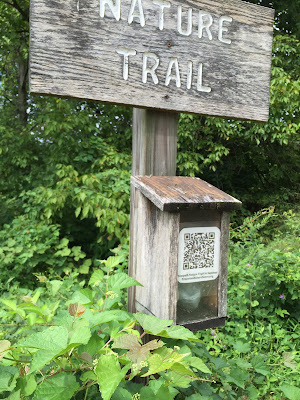 The loop trail that Mr. Tuliszewski mowed is one of the success stories. For twelve years, its meanders have provided a diversion from the straight and narrow of the canal's towpath, on a 6 foot wide mowed path bordered by native wildflowers, grasses, and all the insects and birds they attracted.

Part of the trail's beauty is how it came to exist. Owned by Princeton University but maintained by the staff of DR Canal State Park, the broad fields there along the towpath were getting mowed weekly during the summer. When I pointed out that the area being mowed was actually packed with native wildflowers, the state park staff shifted to annual mowing, allowing the wildflowers a chance to grow and mature each year. The staff then created a lovely trail through these meadows, and installed a sign. 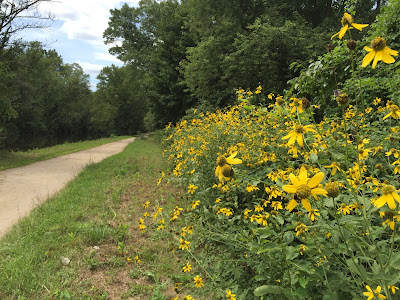 The trail is as old as this blog, whose first post had a picture much like this one, taken of the cutleaf coneflowers bordering the towpath in their first year of bloom near the nature trail's entrance. The many species of wildflowers growing here, their flowering due largely to thoughtful maintenance, have provided seed to expand their populations to other areas of Princeton, most recently at Herrontown Woods.

Thoughtful mowing's as important as the blooming, since only regular mowing keeps the towpath and nature trail passable. Over the years, the nature trail loop's meanders have deepened, to dodge newly fallen trees. Each shift, I noticed, was done in such a way as to make the trail more interesting. 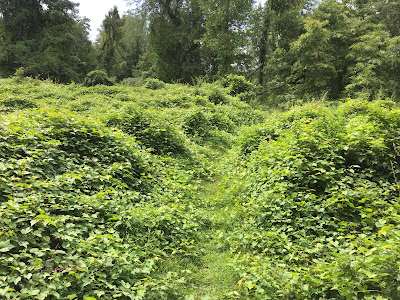 Dropping by a week ago, for the first time this summer, I was surprised to find that the nature trail loop was not getting mowed. Though hikers and joggers have still been trying to use it, one section has nearly been swallowed by the fast growing porcelainberry, underscoring how invasive species can increase the effort required to maintain trails.

I contacted Stephanie Fox, a resource interpretive specialist who supervises care of the DR Canal State Park, and she responded with the sad news that Henry Tuliszewski had died. 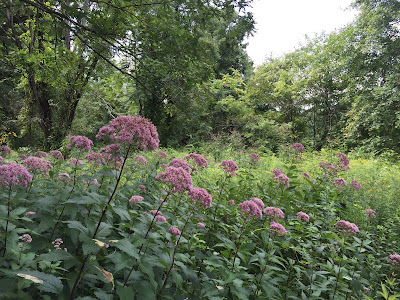 Instantly, the meaning of the flowers blooming along the unmowed trail changed. With gratitude for his many years of quiet service, anonymous until now, these photos of Joe-Pye-Weed and ten foot tall Cutleaf Coneflower are for Mr. Tuliszewski, affectionately known to his coworkers as Buzzy.

An obituary can be found here. 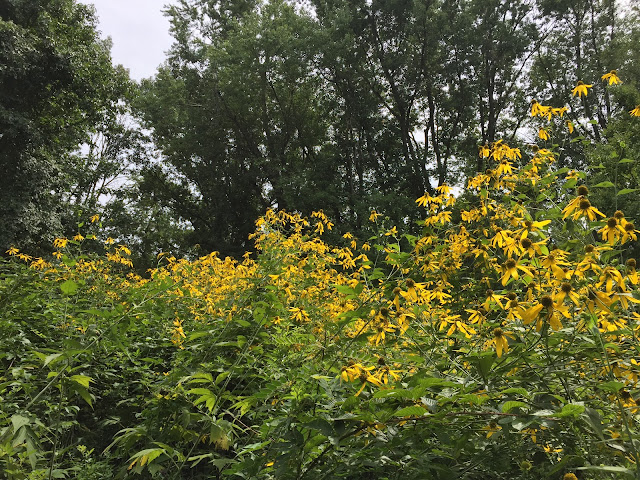 Some of us laid low by the flu hadn't noticed Lake Carnegie's quiet transformation this week into the ultimate sustainable ice ri...