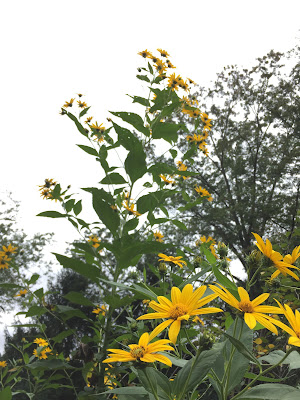 Sunchoke, aka Jerusalem artichoke, or Helianthus tuberosus, is such a neat plant that I never quite manage to eliminate it from our yard. That may sound strange, but the combination of opulent flowers, edible tubers and, less wonderful, a habit of spreading every which way from where they're planted, makes for a mix of affection and exasperation.

This year's unsolicited crop included a plant that grew to 11 feet, holding its flowers high and proud, as if defying autumn's inevitable dousing of summer's riotous blooms. The sunchoke's brilliant display is appealing yet feels a bit out of place, like an overly-enthusiastic late-comer to a party everyone thought was over.

Here's a way to enjoy all that sunchokes have to offer while containing their spreading habit: Get a really big plastic tree pot. Fill with soil, buy some sunchokes at the local healthfood store (Whole Earth has them sometimes through the winter). Cut tubers up into chunks and plant four or five pieces in the pot. Place in a sunny place, either on asphalt or on the ground with a piece of plastic underneath to prevent the roots from spreading into the garden. Keep watered. After the plants have grown, bloomed and died back in the fall, cut the stems and turn the pot upside down, leaving the pot on. You now can lift the pot, pluck a few of the 40+ tubers to eat raw or in a stir fry, and put the pot back on to protect the soil from winter weather. I haven't tried the part about turning it upside down and taking a few at a time, but it would likely work better than harvesting all the sunchokes at the same time and then having to store them. 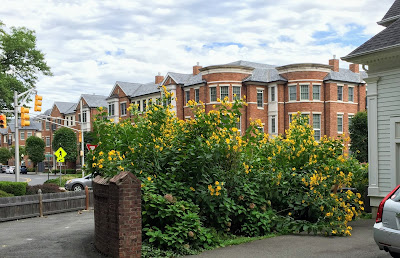 Other places in town where sunchokes thrive are Chambers and Robeson, 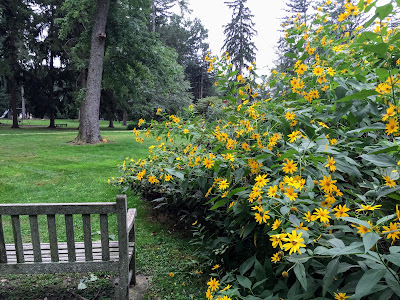 and also Harrison Street Park, where they have taken over a raingarden we planted in a swale at the end of the field. The sunchokes are outcompeting two other species of sunflower we put there, and in a couple years may well swallow the bench. Each year I think of covering the sunflowers over with big sheets of cardboard, to eliminate all the aggressive spreaders while saving what few JoePyeWeeds and other non-aggressive natives may still persist, but I don't get around to it. One has to be scrupulous, persistent, eschewing all sentimentality lest some little sprig of sunchoke survive to reassert utter dominance over time. In the wild, sunflowers do not dominate like this because they are growing amongst other native plants just as aggressive. 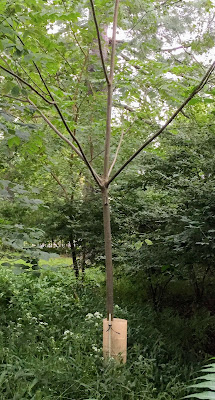 In other plant news at Harrison Street Park, a couple rare native trees called butternuts are thriving, if not as yet bearing butternuts. They've been laid low in the wild by an imported disease, and our local nut tree expert, Bill Sachs, is working to bring them back.

The two at the park have an interesting way of splaying out around six feet high into multiple stems of similar strength, rather than maintaining a strong central trunk. 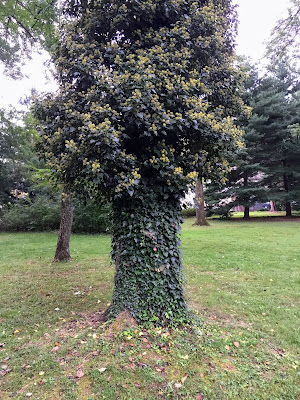 One survivor from the older generation of trees in the park is hosting a dense vertical stand of English ivy. Like the native poison ivy, English ivy doesn't bloom unless it's able to climb. 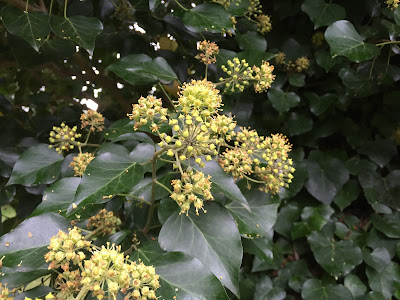 The flowers provide nectar for the monarchs migrating south, but any resulting berries probably get delivered to neighboring yards by the birds, making for yet another plant that, whatever its charms, must be deterred from its relentless spread.
Posted by Steve Hiltner at Monday, September 24, 2018