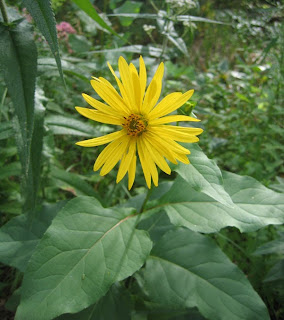 It may not look particularly special, in a season crowded with yellow flowers, but this plant has traveled far and wide to get here, and is of high pedigree. Its travels began when a certain someone, visiting his fiance in Hartford, CT, spotted it thriving next to a dumpster in the parking lot behind the house Mark Twain built and lived in for much of his life, .

A discreet thinning of that thick stand traveled to Ann Arbor, Michigan, where it joined other prairie species in a front yard. When its proud owner moved to North Carolina, he took a plant along, and gave it new digs in a wetland garden at a neighborhood park.

From there, his brother took a small clump to Wisconsin, where it thrived in another front yard on a quiet residential street north of Milwaukee.

By this time, the original plant-knapper had become a purist, reluctant to transport plant material and soil from North Carolina to his new home in Princeton, NJ, lest it contain invasive species. Missing the cupplant, he asked his brother for seed from the plant in Wisconsin. It was duly sent and planted, yet sentimentality was not enough to insure good care. Only one seedling survived the neglect, and finally was given a spot in a backyard wetland garden.

Only now, in the fourteenth year of its travels, has it finally begun to bloom here in Princeton. 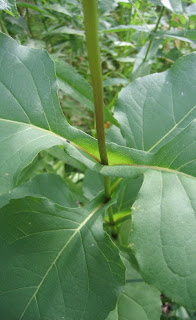 CupPlant is named for the way the leaves form a cup around the stem. The cup holds water after a rain, providing a nice spot for birds to slake their thirst. It's a member of the Silphium genus, which includes other beautiful, tall prairie wildflowers like Prairie Dock and Compass Plant. A traveler seeking orientation can look at a Compass Plant's broad leaves, which line up on a north-south axis.

Though CupPlant is a native, I've never encountered it growing naturally in the field. You'll find it planted along the lakeshores of NY's Central Park, and occasionally in botanical gardens. I like to think the flower caught Mark Twain's eye one day, and that a sprig traveled home with him, on the first leg of a continuing journey.
Posted by Steve Hiltner at Friday, August 29, 2008