Most summers in recent years I've traveled to Ann Arbor for a reunion performance with a jazz/latin group I've played with since 1983 called the Lunar Octet. It's also a chance to see my old neighborhood down along Easy Street, where our first house came with a beautiful garden of poppies, delphiniums, blue thistles, Miscanthus grasses and other perennials. These I loved and tended to, though by the time we headed to North Carolina my gardening interests had shifted strongly towards native plants. I have a friend in that old middleclass neighborhood who in many ways lives a life parallel to my own. Jeannine Palms leads the Wet Meadow Project, which in collaboration with volunteers and city staff has transformed much of the nearby sprawling turfdom of Buhr Park into native wet meadows designed to catch runoff. She often gets kids to help out, and calls them "superswampers." 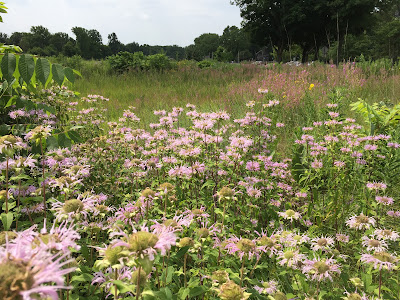 The project is flourishing, with many of the prairie species we have, like sweet bergamot, and a few we don't see here in central NJ, for whatever reason. 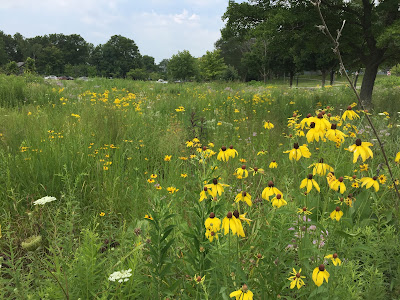 Gray-headed coneflower is one of the midwestern species whose range doesn't quite extend to New Jersey. You'll see in the lower left corner of the photo some Queen Anne's lace, a non-native which Jeannine almost certainly works to limit in her wet meadows. It's a pretty flower, but a trip to the midwest makes one realize how it tends to take over in ways we have not yet seen in New Jersey. Other invasives of midwestern fields, like teasel and spotted knapweed, have yet to become extensive in the east to my knowledge, but it may only be a matter of time. 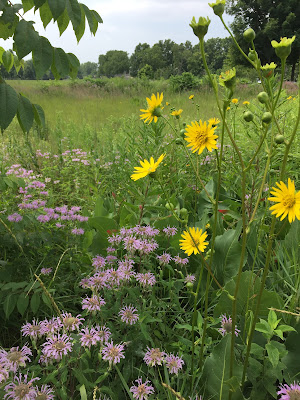 Some of my favorite prairie wildflowers are Silphiums that are much more numerous in the midwest, like rosinweed, compass plant, cupplant and prairie dock. The bright yellow flowers rise on tall stems out of the enormous basal leaves of prairie dock. 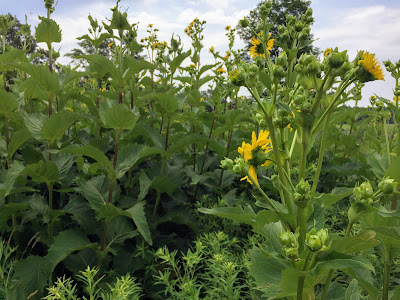 The towering Silphiums in the background are cup plant, a species that we now have in Princeton at the Riverside Elementary gardens and our Herrontown Woods botanical garden. 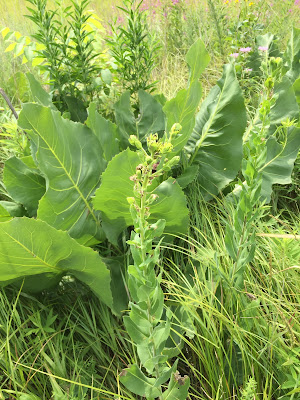 Along with some of the Silphiums, like the big leaves of prairie dock in the background, Ann Arbor's meadows also have some very attractive goldenrods that have the desirable quality of not spreading aggressively underground. Stiff goldenrod (not yet blooming in the foreground) is one of these, as is showy goldenrod. 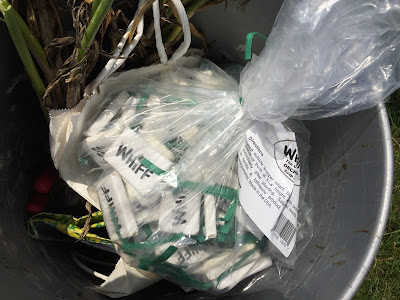 During my visit this past month, I arrived late for one of Jeannine's workdays, just in time to find her walking home with a young assistant--a girl full of wonder at the natural world. They had been hanging some tallow soap in the Edible Forest--yet another patch of grass that Jeannine had transformed into a botanically rich oasis for the community. She had heard that the soap will deter deer. We saw a hawk land in the very top of a tall evergreen tree in the distance, making an insistent, plaintive sound that could have been the hawk's prey or the hawk itself. We wondered whether it might have a nest there. When it flew over to a a telephone pole, a rodent hung from its talons--all part of a food chain that Jeannine nurtures with her native wet meadows.
Posted by Steve Hiltner at Monday, August 12, 2019