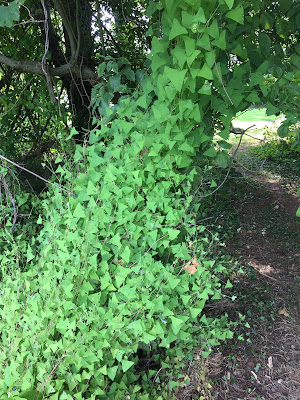 Ever find yourself caring deeply about something the rest of the world ignores? We all pick our battles, and here's a really good one for the Friends of Princeton Battlefield and/or our governing institutions to pick.

Princeton has been graced in many ways of which it is not even aware, and one of those is the up-to-now absence of Mile-a-Minute, a thorny annual vine that grows up and over everything if allowed. Gardeners beware. This one's particularly nasty, and though it has gained a foothold in nearby areas, I've encountered it in only two locations in Princeton. One location is the Princeton Battlefield. The other is on the gravel road in to Rogers Refuge. Each year I pull it out, but by the time I remember to do it, a few of the vines' little blue berries have matured, so the infestation has been growing.

Obviously, my efforts are not enough. The town of Princeton has fortunately hired the NJ Invasive Species Strike Team in recent years to treat invasions by new species, but the Battlefield is state owned, and because of a lack of intervention it is now serving as a seed source that will affect all Princetonians, and not only for Mile-a-Minute. 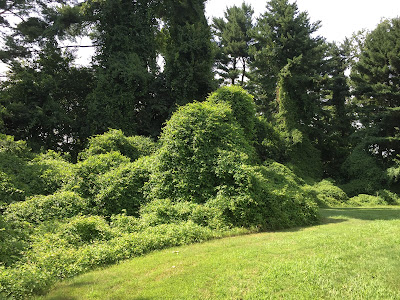 Another issue at the Princeton Battlefield is the massive invasion by porcelainberry--a vine that rivals kudzu in its capacity to sprawl over anything and everything. Its overwhelming presence may seem to dwarf the problem with Mile-a-Minute, yet it can also be seen as proof that we really need to catch these invasions early, before they get out of control. Porcelainberry is not only at the Battlefield, but is also dominating large areas all along the Stonybrook in Princeton. 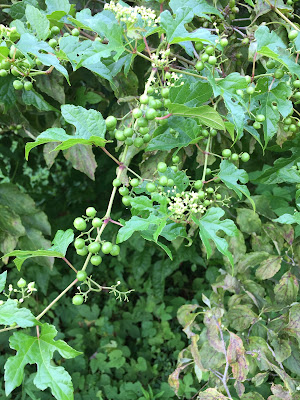 Here are the copious berries produced by porcelainberry vines as they smother the flowering dogwoods planted in 1976 for the nation's bicentennial. The berries turn pretty colors--blue, purple, pink, or white--thus the name, and the original appeal of the plant. But the plant has escaped the usual checks and balances that otherwise sustain balance in nature.

Birds eat the berries of porcelainberry and Mile-a-Minute, thus the concern that what's allowed to grow at the Battlefield will impact the rest of Princeton. 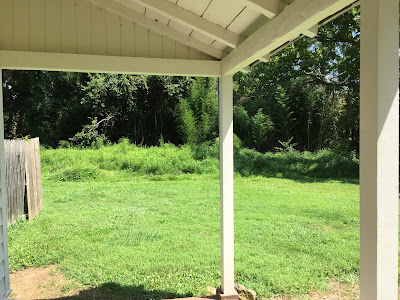 The Friends of the Battlefield group, by the way, has been doing a great job knocking out big stands of bamboo around the Clark House during its annual workday in April. Look in the distance in the photo and you'll see an open field, with only a small remnant of bamboo back near the woods.

But bamboo doesn't spread by seed, and so poses no threat beyond the Battlefield's borders. Volunteer sessions can slow down porcelainberry and Mile-a-Minute a bit, but for any lasting benefit, we need to get some professional intervention. Maybe the Friends of the Battlefield could apply for a grant.

In the meantime, be on the lookout for its distinctive triangular leaf, put on some gloves, and pull it out.