This seems to be the summer for balletic poses by caterpillars and caterpillar wannabes. First came the dramatic pose of Datana contracta, happened upon in a patch of lowbush blueberries at Herrontown Woods.

Yesterday, fellow FOHW board member Sally Tazelaar sent a photo of another balletic display, this time seen on her husband Kurt's hazelnut tree in their backyard. The caterpillar-like creatures munch as a team, working from the edge of the leaf inward, and when disturbed, they pose as a team in surprising symmetry. Unlike humans who pose to be noticed, these larvae are more likely posing to hide. Maybe they are pretending to be dentations--part of the leaf--like the teeth in the uneaten leaf next to them. Doesn't fool us, but then again, we aren't the predators they are hiding from.

Some internet research suggests they are not caterpillars but instead the larvae of the hazel sawfly--Craesus septentrionalis for all the latin lovers out there. Hazelnut trees tend to be loners in Princeton's woodlands, the better to avoid being happened upon by hungry sawflies. 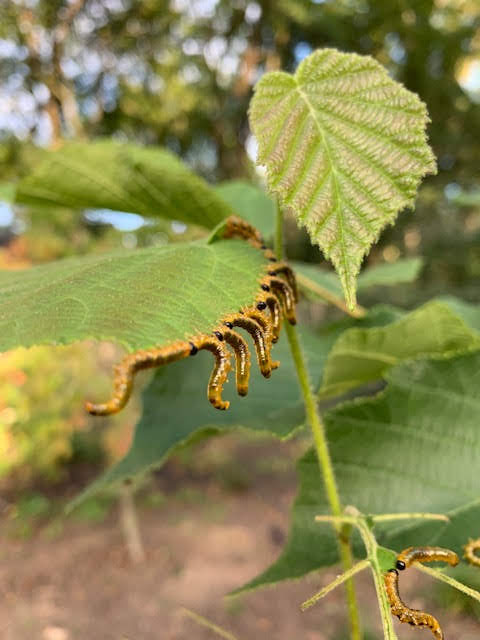 Thanks to Sally for the photo!
Posted by Steve Hiltner at Thursday, August 29, 2019