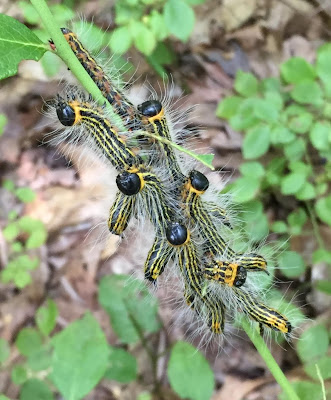 Before I saw the blueberries, I saw the caterpillars eating the blueberry bushes. They were distinctive in the braiding of their bodies into a cluster on the stem. I snapped a photo of their distinctive black heads, yellow necks, and striped bodies, and must have brushed against the bush, because when I looked at them again, surprise! 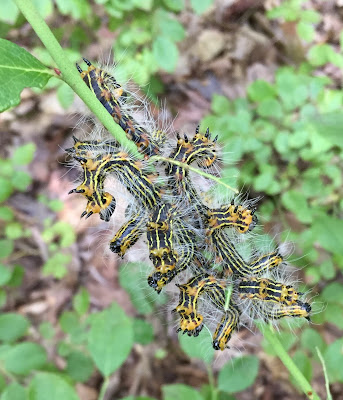 They had all contracted their bodies into a dramatic pose that completely hid their heads, as if they were the caterpillar world's equivalent of a synchronized swim team. What's the logic here? Look down and away and the potential threat will disappear? Seems human, somehow--a caterpillar's artistic pose to symbolize society's head-in-the-sand response to climate change. 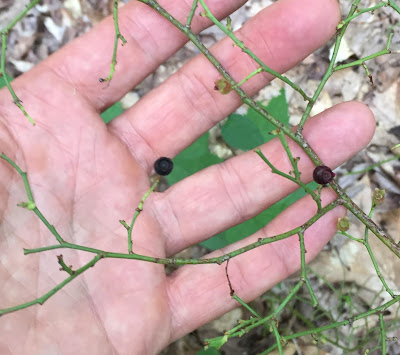 A nearby bush had been stripped of leaves but still had a few blueberries. 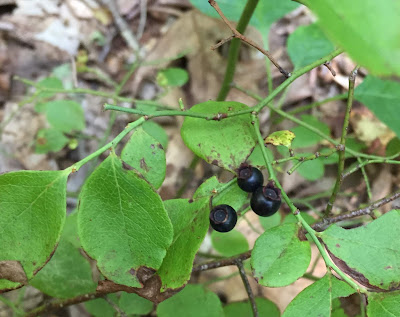 While highbush blueberry bushes tend to be solitary, the lowbush blueberries I have seen in woodlands, whether in North Carolina, on top of New Jersey's Mount Tammany, or in Princeton's Herrontown Woods grow clustered in colonies on a hillside.

These heavily shaded patches and the measly crop they bear seem to me stunted remnants of a past glory, when periodic fires would sweep through, thinning the canopy and setting the stage for a burst of new growth from the resilient roots of the blueberries, which then prospered in the partial shade of the scattered trees. Thick bark and decay-resistant leaves are common traits of trees that are adapted to periodic fire. Oaks exhibit these traits in Princeton, their leaves persisting on the ground as fuel for fires that no longer come.

The most dramatic example of the distortion caused by fire exclusion that I've witnessed was in a woodlot preserved as part of Bennett Place, a Civil War site in Durham, NC where the war's largest surrender took place. In the past, trains passing close by would throw sparks, causing low-burning fires to sweep through the woodland, promoting the growth of fire-adapted post oaks and shortleaf pine. I like to call these rejuvenating events "mildfires"--the relatively tame wildness of a healthy nature--in contrast to the destructive wildfires we're used to hearing about in the news. The woodland--perhaps more like a savanna--was a favorite place for Duke University botanists to find a rich understory of wildflowers prospering in the open shade. As they remarked on this or that rare species of wildflower, they must have sampled the berries from the broad patches of blueberries that persist there. As trains have become less sparky, and people more fire-averse, the less fire-resistant, fast-growing trees like willow oaks have grown up, while the deepening shade and the accumulation of unburned pine needles have stifled the wildflowers. The once-thriving "fire-climax" ecosystem is begging for a fire that never comes, as the old trees slowly succumb.

Though the exclusion of periodic fire has also made Princeton's woodlands less natural, we can see in the caterpillars' partial munching--some shrubs eaten, some not--the persistence of another aspect of balance in nature, worked out over millenia of coevolution. No species can survive long if it wipes out its food source. Long-term stability thrives on balance. New species introduced from other continents lack these elaborate checks and balances. Stiltgrass smothers large swaths of Princeton's preserves because nothing eats it. Our forests have suffered a series of shocks, from chestnut blight in the 1920s, gypsy moths in the 1970s, and now the emerald ash borer--all from introduced species that lacked the checks and balances that evolve over time.

The common name for our very dramatic caterpillar, "contracted datana," is hardly a common name given how few of us have heard of it, and is merely an adaptation of its latin name, Datana contracta.  Come to think of it, the heads of the caterpillar look a lot like blueberries. Their collective ducking seems to be saying to a hungry predator, "Please move along, no food here!"
Posted by Steve Hiltner at Sunday, August 04, 2019