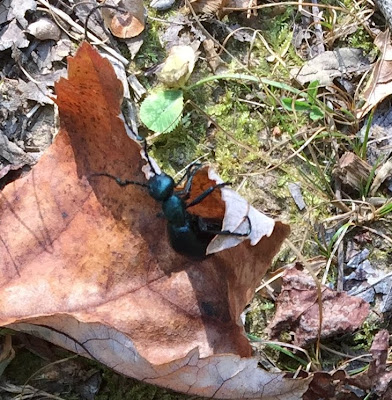 Walking past the Veblen Cottage at Herrontown Woods, I happened to look down and saw what appeared to be a large blue ant navigating through the grass. As I stooped to take a closer look, it took a charming pose on a leaf. Turns out that kink in the antenna means it's a male. 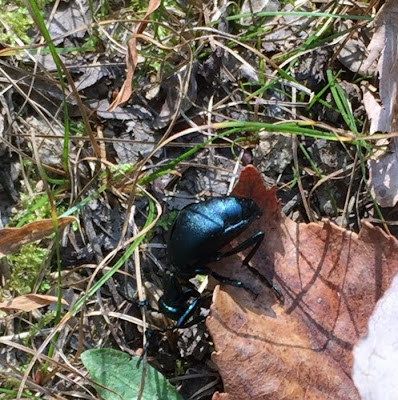 Various google searches yielded nothing similar, until I made reference to its large blue abdomen. Turns out it is not an ant but a buttercup oil beetle (Meloe americanus), a kind of blister beetle containing oils with a toxin called cantharidin that can cause one's skin to blister. 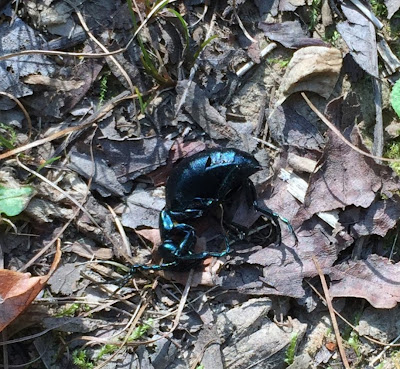 The beetle played dead, a useful strategy in this case, as it caused us to lose interest and walk away.

Seems like every kind of insect has an interesting lifestyle. This one's larva climbs up a plant, then hangs out on flowers, waiting to catch a ride home on a bee's back where it munches on the bee's provisions and young. It can't be just any kind of bee--each kind of oil beetle must hitchhike on a particular genus or species of bee.

Not much has been written about them, but here's a fun post by a graduate student in NC who found one in her apartment. 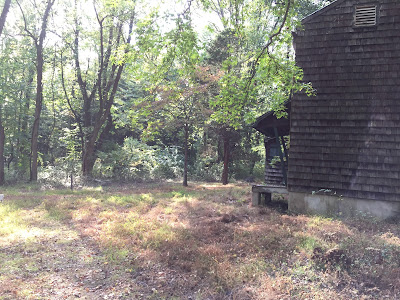 Does a buttercup oil beetle prefer to hang out in the flowers of buttercup? Something to contemplate while tip-toeing through the buttercups around Veblen Cottage next spring.