Attracting Pollinators With Boneset and Thoroughwort 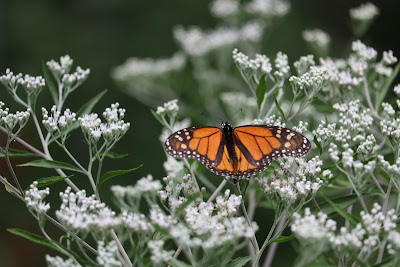 Many people sing the praises of mountain mint and goldenrod for attracting pollinators, but my two favorites are a duo that produce large disks of small white flowers for a long stretch in mid to late summer.

This has been a banner year for boneset and its more numerous but lesser known sidekick, late-flowering thoroughwort. 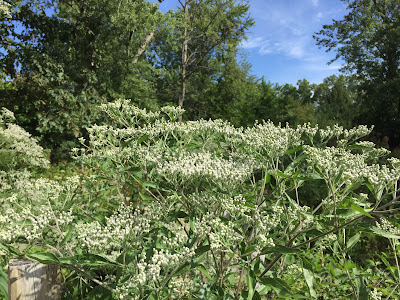 With a name that spreads like the pagoda-shaped stems that carry its flowers, late-flowering thoroughwort adorns the sides of roads and railroads this time of year. I've seen it cover a whole abandoned field in Montgomery, 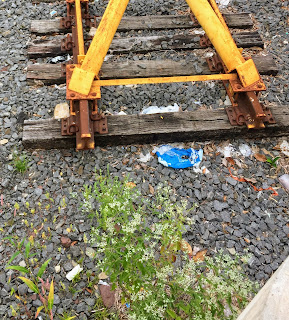 and there's a lone specimen blooming at the end of the track at the Dinky station. 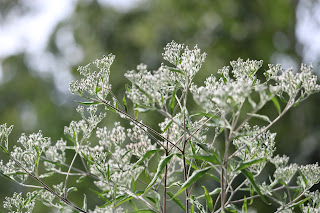 It could be called a successful weed, and sometimes it can look a little ragged, perhaps influenced by how much rain comes. But this year it was the most elegant plant in the garden, its loose clusters of flowers like delicate hands reaching out to pollinators. 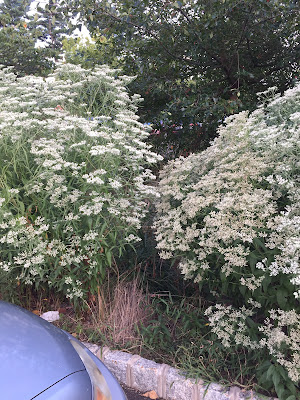 Late-flowering thoroughwort (left in this photo at the Westminster parking lot raingardens I care for) blooms just as boneset (right) is fading, which this year made for a seamless handoff between the two. Though boneset is comparatively rare in the landscape, it will make seedlings to increase its numbers when planted in a garden. 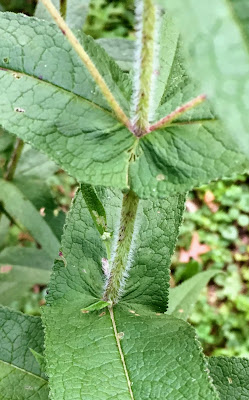 The two species can easily be told apart by checking the leaves. Boneset has pairs of leaves that are "perfoliate", which is to say they fuse to wrap around the stem. Thus the latin name Eupatorium perfoliatum. 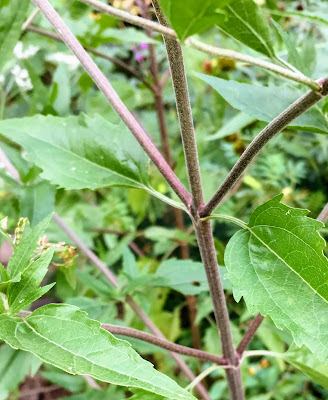 By contrast, the leaves of late-flowering thoroughwort have petioles that extend the leaf away from the stem. The "serotinum" in its latin name, Eupatorium serotinum, means late summer. We could call it the serotinal thoroughwort, but we don't. In the common name, the word "wort" means plant, and if there's anything thorough about a thoroughwort, it's the copious blooms.

Both these wildflower species rise each year to the perfect height for viewing all the varied insect life they attract. Spend some time in that honey-scented space around the flowers and you'll discover an ecosystem in miniature, the flowers being a stage where the protagonists not only feed on nectar, but also look for mates, and sometimes put their lives on the line. 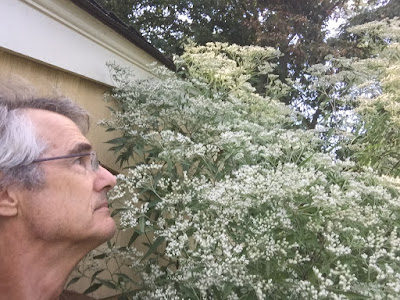 You might think it dangerous to be in proximity to the many kinds of bees and wasps that frequent this floral saloon, but I have never been stung in all my hours immersed in quiet observation. 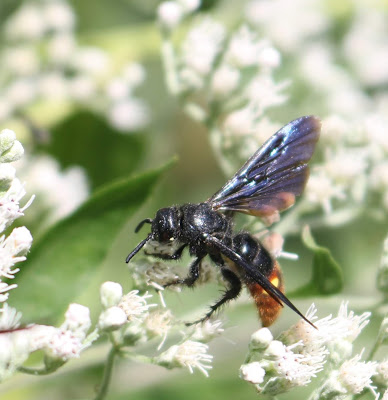 I've even taken to petting the more docile creatures, like this "solitary" blue-winged wasp. Knowledge can cut through fear. It helps that the more aggressive insects, such as "social" wasps like yellow jackets, spend their summers elsewhere. 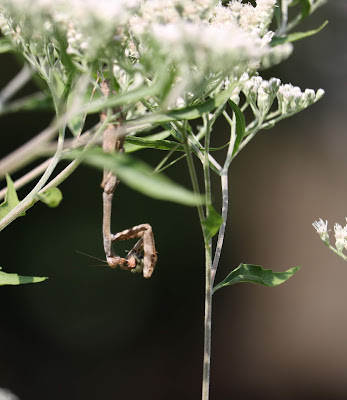 If anything, the pollinators are at much greater risk than I, with an occasional preying mantis showing up to snare a fly, 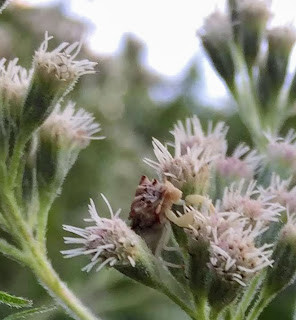 or a brilliantly disguised ambush bug lying in wait for a bumble bee. 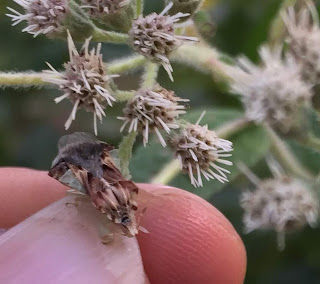 Here's the ambush bug that was hiding in that previous photo. 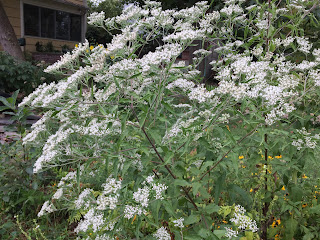 Each plant has a time-release approach to flowering, with some clusters of flowers opening just as others are fading. Week after week in the summer, working in tandem, boneset and late-flowering thoroughwort continue to play host to a shifting cast of insect characters--each with its own traits, backstory and motivations--all the while adding ornament to the garden.
Posted by Steve Hiltner at Friday, September 13, 2019