This post gives a demonstration of wasp petting, and describes a funny thing that happened while helping our younger daughter move into her college dorm.

There's a wasp that's both pretty and pretty harmless. It's named after its wings, which reflect blue in the sunlight, and is easily identified by the rusty orange abdomen with two yellow spots. Scolia dubia, as it's called in latin, is a frequent visitor to the boneset in our backyard garden, more methodical in its nectar drinking than many other wasps.

It's understandable that people are afraid of wasps, given the stings most of us have endured after accidentally stepping on a yellow jacket's nest out in the field. But not all wasps are social like a yellow jacket, or even have nests. A female blue-winged wasp (males cannot sting) has no nest to defend, but rather digs down to lay its egg on an underground grub, then leaves the egg to hatch, consume the conveniently paralyzed grub (usually a larva of the June bug or the Japanese beetle), and emerge on its own as an adult.

Here's an example of how docile these creatures are as they peacefully sip nectar.

This year's visits seemed less frequent than in previous years, leading me to wonder how the species is faring, given all the talk of pollinators being in trouble.

That question was answered in the most unexpected way. Helping our younger daughter move into a dorm for her first year at Princeton University, I noticed one of these blue-winged wasps on a flower near the entryway. Then, on the third or fourth trip in with stuff, I happened to look over at the lawn in the courtyard, and noticed that hundreds of the wasps--let's call it an even thousand--were roaming in zig-zaggy patterns just above the grass. It wasn't at all obvious what they were doing. They looked lost, each flying around and back and forth in its own orbit. Perhaps the grounds crew had blocked their nest, leaving them to search in vain for the entrance. One passerby joked that the wasps were a metaphor for incoming freshmen. Another suggested that the University should take action on what seemed like a threat to the students.

My sense was that any danger was more perceived than real. Having spent many hours this summer photographing the various pollinators visiting the backyard boneset, seeing how harmless are the various bees and wasps when preoccupied with other matters, I waded out into the fray to have a closer look. Were they in fact lost? Or hunting? Or mating? There was no sign of prey, and if they were mating, then why was there so little interaction? 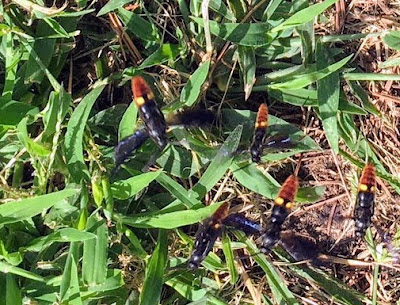 The first clue came only after watching them for awhile. Every now and then, some 20 or 30 of the wasps would suddenly converge on one location in what appeared to be a mad scramble in the grass. It's not easy to photograph wasps zipping around your ankles, but I did manage this photo.

And also this video of one of the sudden convergences. If they were fighting, it appeared brief. If they were mating, it looked pretty clumsy.

Some internet research made it clear that the goal of this mass, planar mingling of wasps was to mate. Some websites state that the males and females do a figure eight-shaped mating dance. Others suggest that those cruising the grass are males waiting for a newly mature female to emerge from the ground. They then converge on the female and compete for a chance to mate. If one's heart can go out to a wasp, my heart went out to the hapless female who, having just emerged as an adult from its underground birthplace, must immediately deal with a frenzied crowd of males seeking to pass along their genes to the next generation. If that is true, though, the sheer numbers and intensity of the gathering suggest that a whole lot of hatching was going on that day, and might the males have also just emerged from the ground? The explanations weren't quite making sense.

I did manage to get up close and personal with one of the convergences, close enough for a voyeuristic view of a male and female taking a tumble amidst the grass blades, clearly mating, with another male up next to them, bending its abdomen and probing in vain. What was surprising was how quickly most males gave up on the project, quickly returning to their holding patterns above the grass.

Here's the online description that best fits what I saw, in a 2016 paper entitled "The Scramble Competition Mating System of Scolia dubia"

Males of the wasp Scolia dubia search for emerging females by flying low over the ground in areas, such as lawns, that contain the immature scarab beetles upon which the grubs feed. When an adult female emerges and is discovered by a searching male, other males often join the discoverer, forming a frenzied ball of males around the female. When captured along with these males by an observer, a freshly emerged female continues to attract males even after she has mated, presumably because her scent continues to be detected by other males. Some males of S. dubia also search for mates in shrubs and trees encircling a lawn as shown by the sexual response of these males to a frozen but thawed female placed in a shrub or tree known to be visited by flying males. Male flight activity peaks around midday but then diminishes as the afternoon proceeds.

It was in fact late morning, sunny, warm, and some of the wasps were flying about the branches of the evergreen tree in the middle of the field. But there are many lingering questions. Do these gatherings happen only once per year, or multiple times in the summer? Was this lawn special in some way, or does this happen all over town? And how did these rituals play out before lawn mowers were invented? 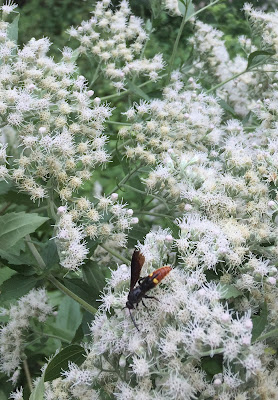 One thing is clear. These docile wasps do us a favor by preying on a notorious garden pest--the Japanese beetle. Maybe some September, walking home from the Dinky station, you'll cut through campus and some late-flowering thoroughworts will catch your eye. There, in the clouds of white flowers, blue-winged wasps will be busy living their quiet lives, minding their own business while doing good deeds, their solitary pursuit of nectar giving no clue as to the elaborate choreography that brings them into being.
Posted by Steve Hiltner at Thursday, September 19, 2019