A Pumpkin's Smile That Would Not Die 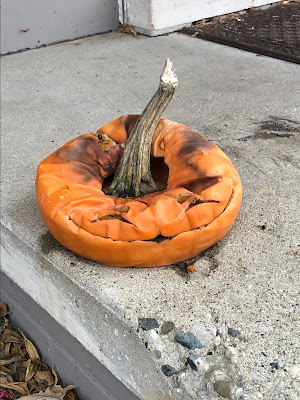 This pumpkin, too, would have long been gone if not for its smile, and for an assignment given to its carver, an art student named Theadora, to draw an object in progressive stages of decomposition.

For me, this smile, here visible, is inherent in all things making nature's magical journey from death back to new life. For me, leaves keep their smiles all the way through winter and the following year, as they are slowly dismantled, losing themselves to a soil's riches, casting their carbon to the winds to take new forms.

In addition to the artist, the art teacher, and my friend Dan--the patient, appreciative father who took the photo--there is one other person to credit for this lingering smile. 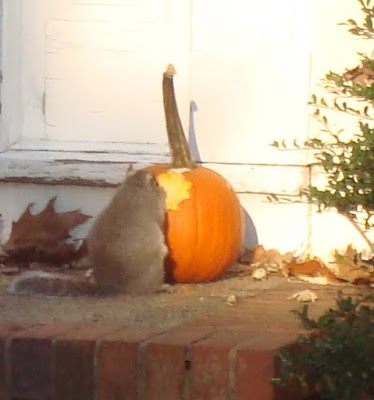 As we know here in Princeton, many a pumpkin's well-carved expression has been lost, or reworked, by a neighborhood squirrel. 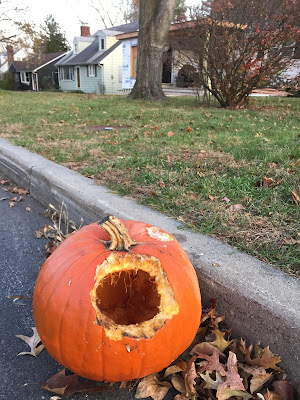 Squirrels tend to render one-eyed faces, or a face that is all mouth and no eyes, 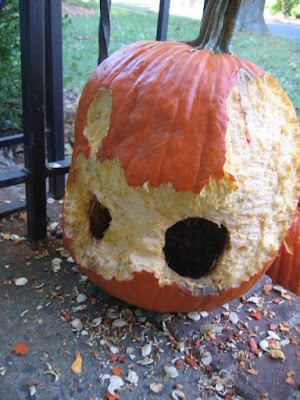 though perhaps a couple squirrels teamed up to carve what here looks like a face with bunny ears. 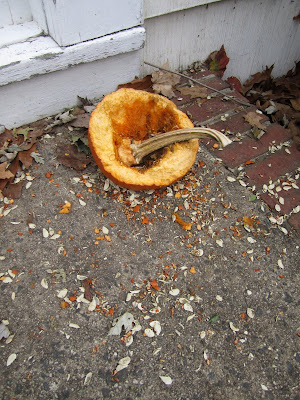 Sometimes, if a squirrel is too hungry, it abandons all pretense of artistry and eats its own carving down to the ground.

Thea's smile in Michigan might too have been radically reworked by a local squirrel if not for the mother, Karen, who has been paying off the local squirrel mafia with peanuts in a shell, which she delivers one by one to their tender, appreciative paws on the back porch.

Moral: It takes an artist to make a smile, and a family to keep it going. I wonder what other stories this smile has to tell.