Are Foxes Poised for a Cyclical Decline?

Walking back towards the parking lot at Herrontown Woods the other day, I was surprised to see a fox up ahead, trotting in my direction. It turned down a side path before it reached me, seemingly unaware of my presence. The fox was showing the classic symptoms of mange, more specifically sarcoptic mange, having lost much of its fur, and you have to wonder what it's prospects are for the winter. 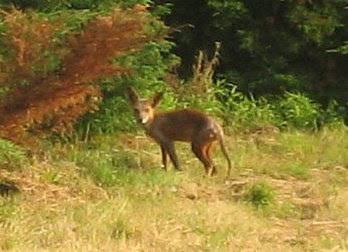 That sad, raggedly fox moving on down the trail, seemingly resigned to its fate, brought back memories of this photo sent to me years back by Christy and Brian Nann, taken at Greenway Meadows. The Mercer County Wildlife Center confirmed for me that it was a red fox stripped of fur by mange, with little chance of survival.

Typing "mange" into the search box for this blog, I was not surprised to find that the photo was taken in late 2008, roughly ten years ago.

That eleven year gap in sightings of mange may not be a matter of chance. Somewhere along the way, growing up in small town Wisconsin or reading wildlife magazines, I learned that foxes and their prey go through a ten year population cycle. There's a boom and then there's a bust.

In recent years, we've been witnessing the boom. Foxes have been flourishing in Princeton, moving up stream corridors into new urban areas. Certainly they've been making their presence known in our neighborhood. My wakeup call came two years ago, when a fox ambushed two of our last three chickens, consuming one and leaving the other stashed under a neighbor's bush for a future meal. Clearly, the local predators were upping their game. Earlier this year, during dogwalks at dusk, I would occasionally see a fox trotting confidently down the middle of the street before ducking behind a house. Late at night, I'd hear their baleful bark in our driveway. A few blocks away, a fox family had a large litter under a neighbor's porch, causing some controversy as to what if anything should be done. The most impressive sighting came last winter, when I was standing in the Herrontown Woods parking lot. Across the stream, a beautiful specimen was moving stealthily through the woods. It paused and went into a crouch, then pounced, penetrating through the few inches of snow with uncanny precision, then trotted off with a rodent in its mouth.

There's logic to the boom, and logic to the bust that may now be underway. When predators are few, rabbits and rodents increase, providing foxes with an abundant food source. Then, as the fox numbers increase, their skillful predation continues taking a toll on their food supply until the foxes find themselves with little to eat. The too numerous foxes begin to starve, and their weakening immune systems make them vulnerable to the burrowing mites that cause mange. The fox population crashes, the rabbits and rodents rebound, and the cycle begins anew. The internet is full of stories of this boom and bust, from Colorado to one out of Vermont that gives an especially detailed description of the biology behind the afflicted fox's misery. The Vermont post suggests that mange can be an isolated event, but also tells of how mange once precipitated a 95% drop in the fox population in a city in the UK.

There are lots of questions to ask. Has the boom cycle in foxes reduced Princeton's population of rats? Might it explain why there seem to be fewer squirrels around than in past years? Might predation of mice be expected to reduce the prevalence of ticks and lyme disease? Is there a ten year ebb and flow to fox raids on chicken coops?

Though rodents can survive a boom in the red fox population, less certain is the resilience of ground-nesting birds on the Jersey shore, like the endangered plover. Red foxes, it turns out, were introduced from Europe. The native gray foxes tend to stay deeper in the forest, and so the red foxes may pose a threat in more open habitat that the shorebirds have not evolved to defend themselves against.

To protect the birds, the state Division of Fish and Wildlife has been culling the red fox population along the shore. Residents outraged by the intentional killing of such beautiful animals managed to get 80,000 signatures on a petition demanding the state's trapping program end. If the petitioners were successful, however, the results might not be exactly humane. When an unfettered population of foxes ran out of endangered shorebirds and other prey to eat, it could succumb to mange--a painful and deadly condition that makes the government's trapping program look highly humane by comparison.

Of course, no enlightened fox is going to rise up and warn its brethren to have smaller litters in order to sustain adequate prey and avoid the epidemic of mange. It is humans who have that gift of foresight and sophisticated communication that can forestall calamity, and yet our special gifts are being spent not to limit our own boom and bust cycle--played out over centuries rather than decades--but to create the conditions for a bust of such global proportions that no life form will remain untouched. Whether it's CO2 or foxes, we live in an era when superficial views of nature predominate, when the misplaced sympathies of 80,000 people can be manipulated to oppose the one government action that could protect both the endangered birds and the foxes from calamity.

This is the journey of thought, back to my youth and forward to a shared future, that can spring from a chance sighting of a forlorn fox along a wooded trail.

From what I've read, mange in foxes poses little risk to people or pets.
Posted by Stephen Hiltner at Tuesday, December 17, 2019