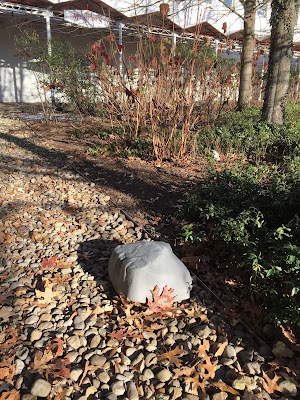 Though I can talk to someone for an hour and not notice what they are wearing, I do notice things in nature. Take this rock for instance, which was sitting unassumingly next to the sidewalk near the back entrance of the local supermarket. I noticed the rock, and then noticed that it wasn't a rock, really, but instead was made of plastic and just happened to be the size of those electronic rat traps you might see in NY alleyways. Sure enough, a closer look revealed round entry points of the appropriate size cut in the plastic.

Then a few days later, a supermarket employee was outside near the "rock", and I mentioned it to him. That was enough to get him talking about a chipmunk that lives in the bushes there. He obviously was fond of this chipmunk, showed me the hole in the ground into which he'd seen it disappear. He hoped it was smart enough to avoid the trap. "Rats may be smarter than chipmunks," I said, realizing I wasn't exactly feeding the wellsprings of hope.

He also told me that he'd seen the chipmunk duck into the store when the doors first open, snatch whatever it could find on the floor behind a counter, and then make it's escape to enjoy its gleanings back in its own private chipmunk preserve in the courtyard. It was a darling story of a cute and enterprising rodent, but might also explain the presence of the "rock." 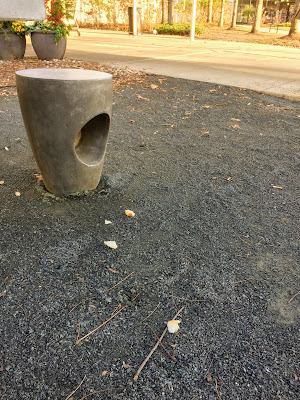 On my next visit, I noticed pieces of bread scattered in the small plaza near the trap, too numerous to be accidental. In the photo, the bread crumbs are in the foreground, while the trap is a tiny speck across the sidewalk in the background.

The photo nicely captures the opposite views of chipmunks that can be found in my own family. Though I don't remember ever feeding them, I grew up loving chipmunks--their striped good looks, their perky manner and upbeat chirp, the comic but highly utilitarian way they'd stuff nuts into their cheeks. All through the intervening years, I have yet to be wronged by a chipmunk, and have cheered their periodic arrival in the yard--though a vulnerability to local predators may explain why they never seem to sustain a presence.

So it was a surprise to hear my sister in Cleveland describe them as the bane of her vegetable garden. Have Cleveland chipmunks gone rogue? Or might it be that her low opinion of chipmunks is due to a lack of sufficient predators to keep their numbers in check? Interesting to contemplate a predator being the guardian of a prey's reputation.

When it comes to liking or not liking, whether in nature or society, both the judge and the judged can easily get trapped. One positive trait can make people ignore all the negatives, and one negative trait can overshadow all the positives. Emotion seeks purity--a definitive judgement up or down--even as good and evil become increasingly intermixed. When it comes to chipmunks, for now I'm content to, as F. Scott Fitzgerald wrote, "hold two opposed ideas in mind at the same time and still retain the ability to function." I'll carry opposing ideas like a chipmunk carries nuts bulging in its cheeks, to be stored as future food for thought.
Posted by Steve Hiltner at Sunday, December 29, 2019