In my inbox recently were two remarkable bird sightings. The first was of a juvenile red-headed woodpecker, spotted Nov. 30 by Susan Miles at Rogers Refuge. This refuge, renowned among birders but not known to many other Princetonians, is on American Water property at the bottom of the Institute Woods, accessible via West Drive. 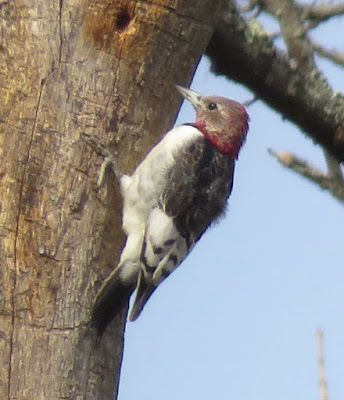 David Padulo took these excellent photos of the bird, which has been continuing its residency in a prominent snag in the woods.

Red-headed woodpeckers were a fairly common sight in the mature forest that I grew up next to in southeastern Wisconsin. Sightings became more rare when I moved to Durham, NC, where they seemed dependent on large congregations of snags created by flooding or fire.

The red-headed is the one species of woodpecker I have not seen since moving to Princeton, so it's good to hear that at least one juvenile has strayed into the area. One theory is that the tragic loss of ash trees due to the introduced Emerald ash borer may boost woodpecker numbers for as long as the snags last. 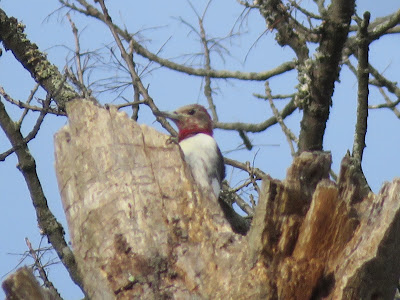 Melinda Varian offered the following directions for finding the woodpecker.

Walk along the Stony Brook, about 0.4 miles along the Blue Trail, going from the parking area through the water company and down along the brook. The best place to find it is to walk the Blue Trail to the area where we had to move the trail inland a couple of years ago because it was about to fall into the water.
Halfway along that new section, stand with your back to the brook and look for a light-colored, very tall snag that leans slightly to the right. The bird flies to the top few feet of that snag frequently before going to the other trees in the area. It makes a very recognizable sound that could be described as a sort of chuckling.


Susan Miles added that "the sound it makes could be confused with a Carolina Wren, but it's coming from high in the trees." 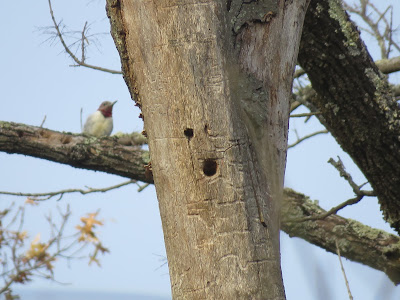 Lee and Melinda Varian are now leading the Friends of Rogers Refuge. Lee recently built a new trail--accessible by walking down the gravel road to the left of the water company buildings--in memory of Fred Spar, long-time leader of FORR. The trail helps provide better access to the lower marsh.

Years back, I wrote an ecological assessment and stewardship plan for the refuge, and still help out from time to time. FORR just received another grant from the Washington Crossing Audubon Society to continue invasive species control in the refuge.

The other unusual bird sighting that showed up in my inbox came from Mimi Mead-Hagen.


An odd occurrence happened to us when we were in Philly visiting our son at Penn. We were leaving the squash courts walking along a path when my 21 yr old son was almost hit by something…he ducked and there on the pavement landed this stunned bird. It had hit the ground in an awkward way then recovered to a sitting position as seen in the photo…

Woodcocks sometimes migrate, and my guess is that this one hit a glass building and crash landed on the pavement. By the body language in the photo, there's some promise that it would recover. Thanks to Mimi for the photo (below). 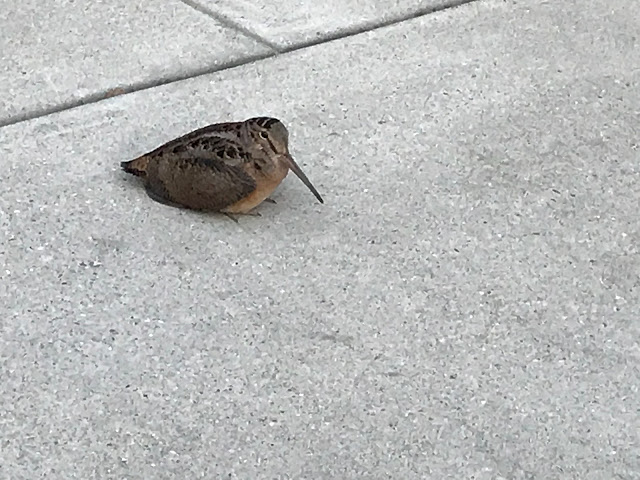 Rogers Refuge happens to be one place to see the male woodcocks do their spectacular mating flight in February and March. Because the Alexander Rd bridge is closed, many drivers happen upon the refuge when they take West Drive in search of an alternative route to Route 1. There is no alternative route, however, and the water company said it would erect a sign to make clear that the gravel access drive to their buildings is private. You can still drive in there and park next to the observation tower to enjoy the refuge.
Posted by Steve Hiltner at Wednesday, December 11, 2019