Late May Sightings in Herrontown Woods and Elsewhere 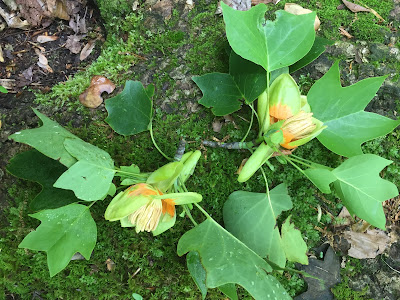 A runner named Nikolas who moved to town less than a year ago and, because he has considerable curiosity and runs rather than walks, already knows the area trails better than most of us, asked me what these are. He's been seeing them along paths in many places. They are the tips of tulip tree branches--a tree that grows to giant size and has distinctively shaped leaves and tulip-shaped flowers. It's sometimes called tulip poplar, and has a poplaresque look to it, but is actually in the ancient magnolia family. For some reason, I've never been very curious about why the tips of tulip trees end up on the ground this time of year, but Nikolas was. So I looked it up, and found out that squirrels bite off the tips, then drink the spring flow of sap from the cut stem as if it were a straw. No plastic straws for a squirrel, and it must be exciting to quench one's thirst while teetering at the end of a branch, 70 feet above ground. There's also a scale insect that can suck the sap from a tulip tree, then drops its aphid-like honeydew on the ground below, like a sticky rain. Fortunately, that's according to the internet rather than experience. 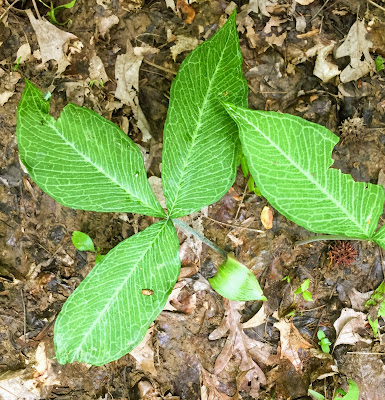 Very rarely, Jack in the Pulpits have this prominent venation. One nursery sells it as "Starburst." 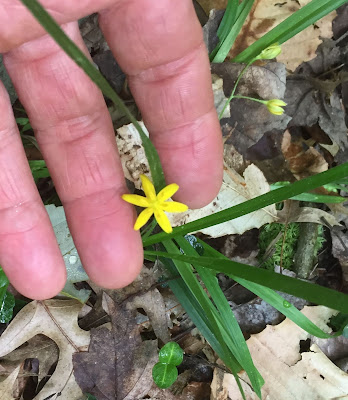 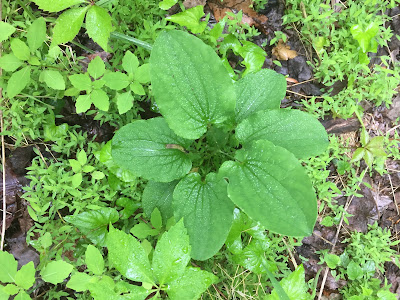 Wood briars have the latin name of Smilax and tend to have thorns and arching veins in the leaves, and grow up and over things. This one is less frequently encountered, has no thorns and supports its own minimal vertical ambitions. Called Smilax herbacea, apparently because it's more herb-like, its common name is carrion flower, named for the alluring aroma of its flowers, which I have yet to sample. Hinting at its preference for wet ground is all the jewelweed and stiltgrass seen rising from the ground below it in this photo. 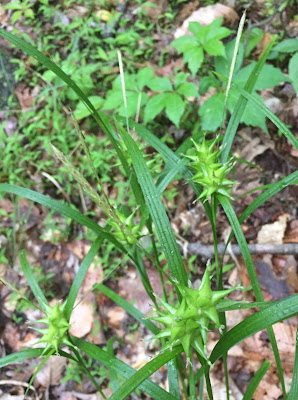 Bladder sedge is one of the sedges with interestingly shaped seedheads that make up for the lack of color. 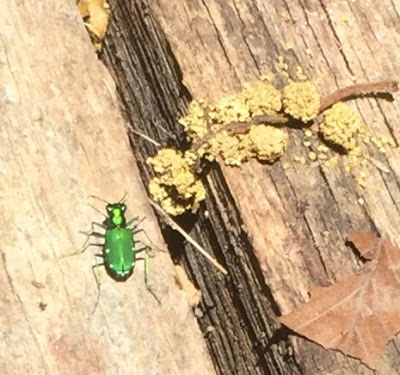 Have seen tiger beetles a couple times in Herrontown Woods this spring. They are speedy predators. 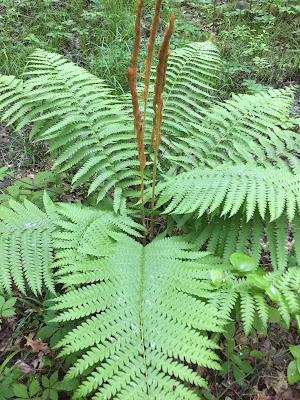 I happened to take a peek behind an ugly strip mall in Princeton Junction and found that where the expanse of asphalt ended, an amazing ecosystem began, filled with blueberries and sweet pepperbush and expanses of ostrich fern, growing beneath oaks and even a American chestnut that was hanging on. One could grieve for what was buried beneath the asphalt sprawl, or be astonished at what has managed to survive. 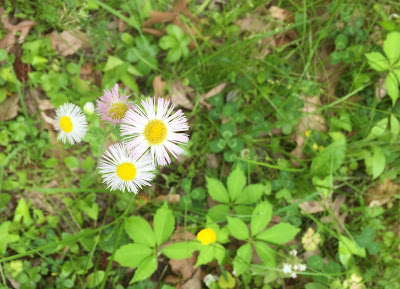 People often ask what the white flower is that grows a couple feet high and looks pretty but a little weedy. Daisy fleabane. (Betty Horn reminds me that there are a couple species of fleabane.) 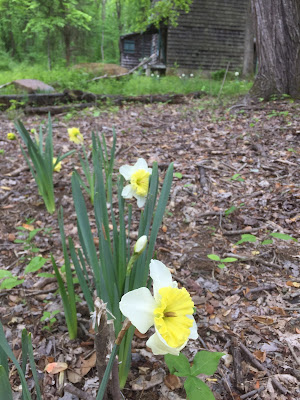 This is what happens when you plant daffodils in spring rather than in the fall. They bloom in May and June. Keena sent me this photo of a puffy golfball-sized growth on a white oak at the entrance to botanical garden taking shape next to the main parking lot for Herrontown Woods.

Turned out to be the tree's creative response to the wool sower gall wasp, which lays its eggs on oaks in the spring. The wasp "sows" its progeny, and ends up growing something wool-like in the process. 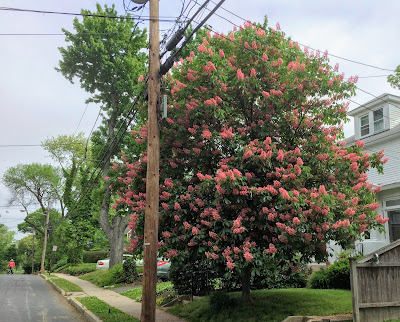 Red buckeyes are good to plant under powerlines, since they don't get very big, and would be an excellent tree to plant south of a house that has solar panels. People think that we must choose between trees and solar panels. No, just plant trees that don't grow tall, and one gets the carbon sequestration and cooling action of the tree plus the power generation and roof shading of the panels. That's what we call a "win-win."