When plants aren't "playing well with others," sometimes one has to lay down the law. That's what happened in an area of the garden that got away from us. While we were off living our lives, Lizard's Tail, sunflower, and a common goldenrod were quietly sending their rhizomes out in all directions. Ground ivy and mock strawberry were overwhelmingly undertaking relentless stoloniferous expansions. And the once endearing, highly edible blue violets were pushing their way into every nook and cranny. 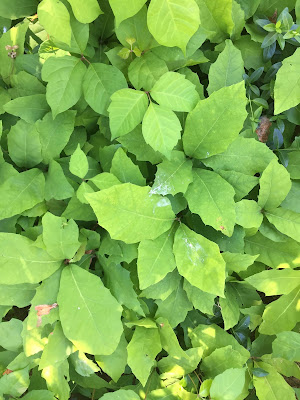 Some nature writers congratulate themselves on their tolerance for all living things, but that tolerant pose somehow doesn't extend to species that threaten people, e.g. COVID-19. A lot of the love gardeners feel for the plant world is expressed, ironically, by killing some plants that are threatening others. I may love red oaks, and can see that even poison ivy has an ecological role, but that doesn't mean I'm going to let a thousand seedlings take over a garden bed. 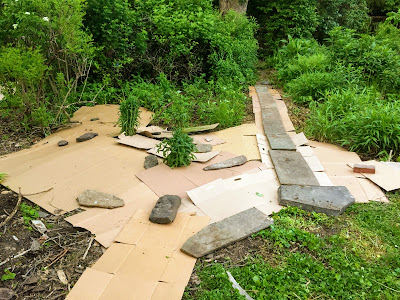 In extreme cases, where the desired and undesired become hopelessly entwined, or a garden path disappears in a sea of "way-too-much-of-a-good-thing" overgrowth, it's time to bring in the cardboard.

Yes, cardboard. Given all the negative forces in the world, cardboard stands out as a beneficent presence, rivaling that of chickens, or perhaps peanut butter, outstanding in its inborn capacity to do good with very little downside. Occupying a niche somewhere between wood and paper, cardboard can take myriad shapes to serve myriad purposes, whether keeping stuff together in a basement or rising into high art at a museum or on a stage.

In a garden, cardboard serves in a sprawled state, depriving weeds of sunlight, and creating a barrier that's strong and lasting enough that weeds can't push through. Some people use landscape fabric, but over time soil begins accumulating over the fabric, weeds grow on top, and the buried fabric then becomes a nuisance that needs to be pulled out and thrown away. Cardboard serves as a barrier for a season or two as it slowly decomposes, leaving no trace. 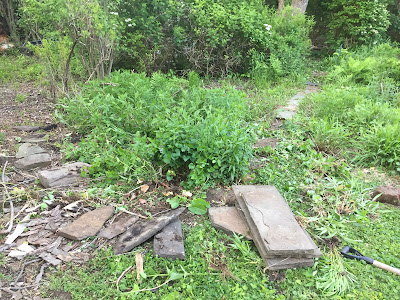 Here's the legacy of neglect, with path stones retrieved from the chaos, 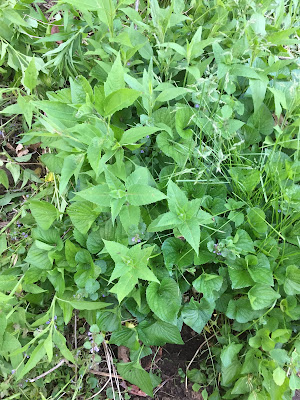 and a tangle of way too aggressive sunflowers and violets. All are beautiful in their way, but hard to keep in balance with everything else. 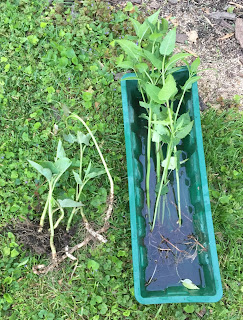 Before laying down the cardboard, a few beebalms and lizards tail were retrieved from the mess with the intention of planting them elsewhere.

A variety of sizes of cardboard are useful. I put a few desired plants in--the sort that don't spread but instead grow in bunches--like ironweed, boneset, hibiscus, culver's root, tall meadow rue, cutleaf coneflower--then surround them with overlapping pieces of cardboard. More plants can be put in along the seams or by punching a hole in the cardboard. The walkway stones were put back in place, and other stones used to keep the cardboard in place until we can cover it with mulch.


Here, for instance, we're using cardboard as a base for a walkway around the "Veblen Circle" of native plants at the botanical garden next to the Herrontown Woods parking lot. A stone border is laid along one edge of the cardboard, and chips are placed on top, completely disguising the cardboard. The result is a weed-free path for a year or two. That's a whole lot easier than pulling each individual weed. 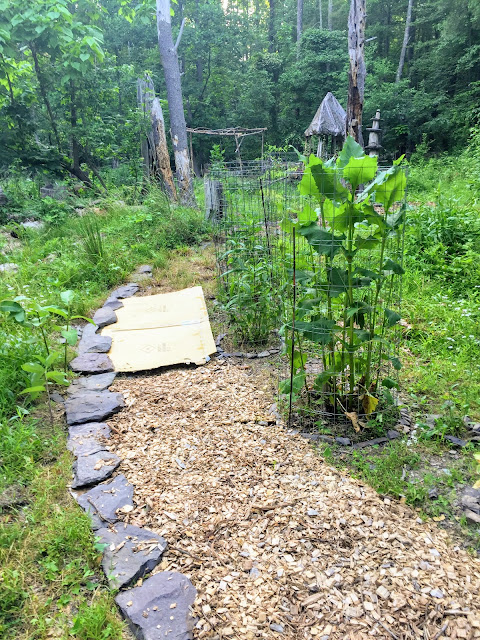