The Many Blooms of June 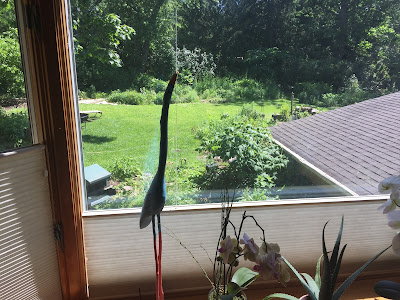 There's a wooden heron that looks out on our backyard garden. I hope it's happy with its bay window habitat of orchids, christmas cactus and aloe vera, and pleased with all our efforts to steer the sun- and rain-drenched plant growth beyond the window pane. 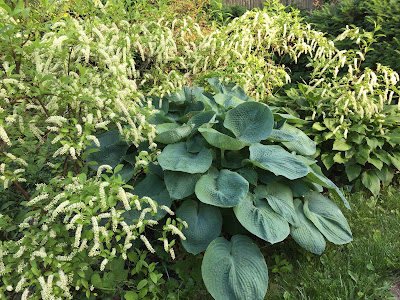 The garden is a collection of mostly natives with a few non-natives mixed in. A garden and a mind are enriched, one by the other. A plant often has to first make it into the mind before it can find it's way into the garden, and the garden can surprise the mind with what pops up. Over time, both the garden and mind gain in variety.

It's been a particularly good year for the Virginia sweetspire, which along with its sweet spires has the added bonus of creating suckers near its base that can be dug and moved to new spots. 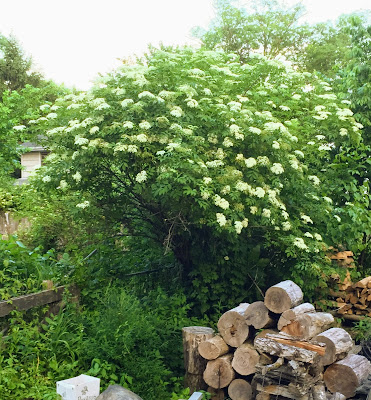 Elderberry makes up in berries and blooms what it lacks in grace. Maybe this year, being less distracted, and if the covetous catbirds cut us some slack, we'll set about harvesting the berries and making those delicious pies remembered from youth. 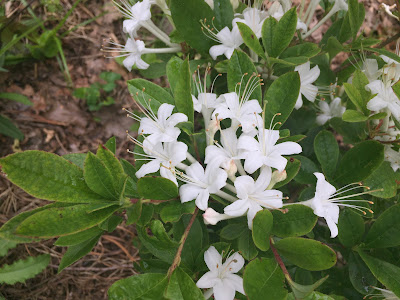 Most azaleas people see are evergreen and not native, but there are some wonderful deciduous native azaleas like this swamp azalea. Pinxter azaleas were once common in Princeton woodlands. 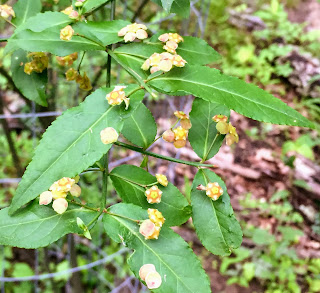 More subtle is the native Euonymus that are mostly browsed down to a few inches high in local woodlands by the deer. Their ornament comes later in the year, with the bright berries that give them the name Hearts-a-bustin. These I found locally, grew to size, and have begun placing in the "botanical garden" at Herrontown Woods, protected by cages. Otherwise they would be eaten down and never flower or make berries. 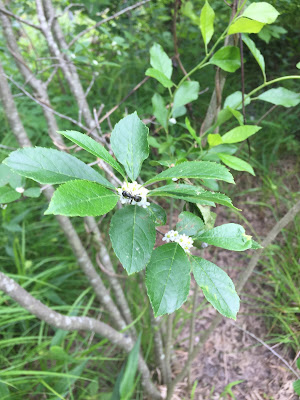 Even more subtle is winterberry--a holly that's growing in one of our miniponds. Our front and back gardens get a boost from runoff from the roof and the neighbor's yard, all directed into many shallow depressions where the water can collect and seep into the ground. Managed well, the puddles can serve as mosquito traps, luring female mosquitoes to lay their eggs, then drying out before the larvae can mature. 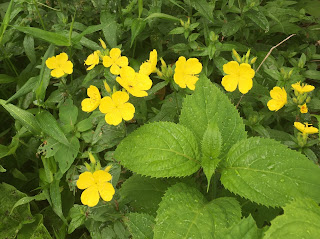 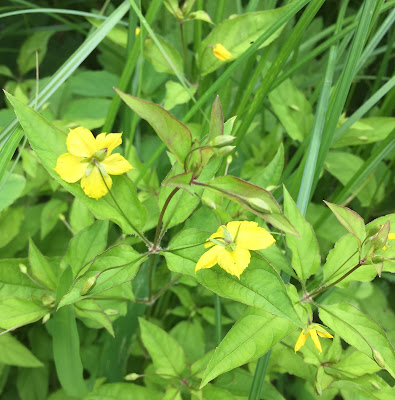 Fringed loosestrife seems a delicate and bashful native, with flowers pointed down, but has been a surprisingly aggressive spreader when placed in the protected, fertile environs of a garden. It may need to be planted in a shadier spot where it won't have so much energy to expand. 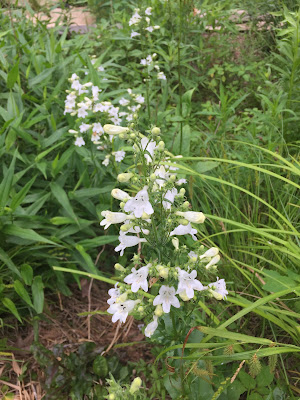 Beardtongue (Penstemon) blooming in a garden means it's also blooming out in the wild. 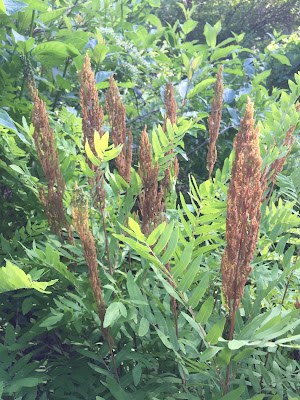 The deeper depressions we have in the backyard swale are populated by all sorts of plants that thrive in wet, sunny spots. This is royal fern, which stays in place, while sensitive fern tends to spread. 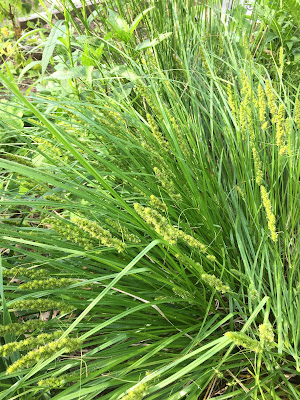 Many kinds of sedges provide a nice background texture. This one is fox sedge, which is less ornamental than fringed sedge and bladder sedge. 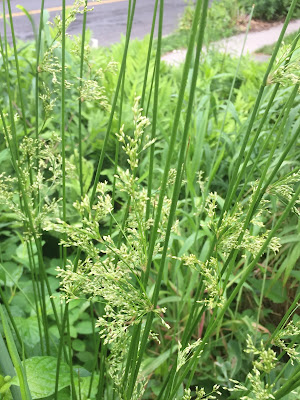 A personal favorite is soft rush, whose green "blooms" arise partway up the darker green leaf stems, like elaborate earrings. It's stems may be soft but it's a tough plant that can be found growing in ditches. Bring it into the garden and it achieves a graceful vase-like shape that makes for an accent that's both striking and subtle. 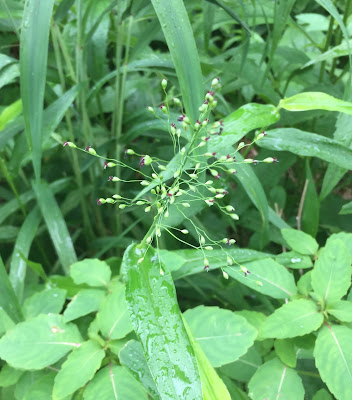 Botany teaches us to make distinctions, for instance between sedges and rushes--which look like grasses but aren't--and the many attractive plants that actually are grasses, like this deertongue grass, here shown next to a rising sea of jewelweed. 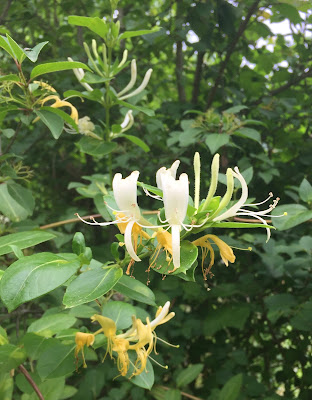 Fragrant Japanese honeysuckle always finds a way to survive our periodic attempts to discourage its rampancy. 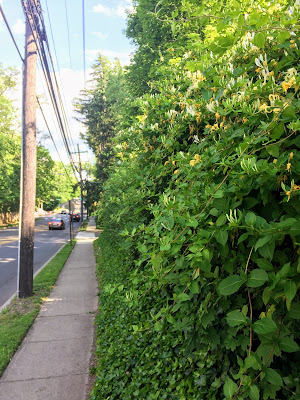 Across the street, unfettered Japanese honeysuckle is overwhelming a hedge. Eventually, the hedge will die from all the competition, and the honeysuckle vine will play king of the slowly collapsing mountain as the suffocated shrub rots and buckles from the weight. Passerby will still think it's a hedge. 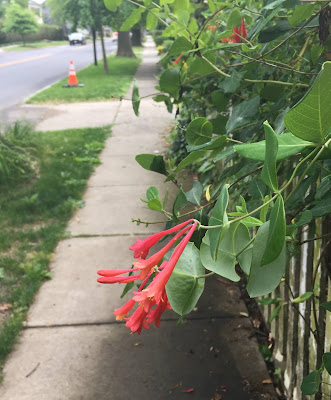 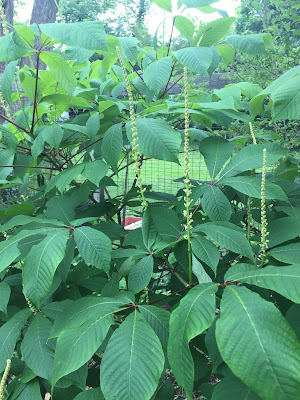 Meanwhile, back in the backyard, bottlebrush buckeyes are working on some spires, 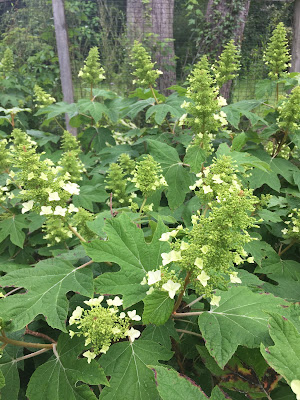 and the oak-leaved hydrangias are getting ready to put on a show.

During a pandemic, it feels like such wealth to have nature close by, thriving through it all.
Posted by Stephen Hiltner at Saturday, June 13, 2020