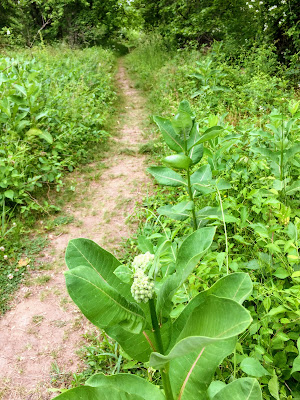 It's good to see a nature path well used and free of obstructions, which is the current state of the nature loop that winds through a wide section of the DR Canal State Park, just up the towpath from Harrison Street. (for posts showing the trail in different seasons, type the keyword "loop" into the searchbox for this blog) The whole area was being mowed until I convinced the state park folks to let the wildflowers grow, back in 2006. They then created a nature trail loop through the open woodland landscape between the canal and Carnegie Lake, and maintained it beautifully until a couple years ago, when they asked Princeton University to take over the mowing of the trail. PU actually owns the land, even though it's part of the state park, and they finally agreed to maintain the trail. I was out there with a chainsaw, doing what I could during the transition, given the tendency of trees to fall across the path.

As of June 2, the path was looking great, possibly due to university care, but thus far maintained more by foot traffic than anything else. Here's a plant-person's take on the interplay of native and non-native species to be found along the way. 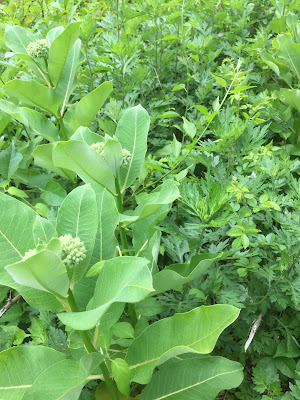 Common milkweed is one of the few natives that can compete with the highly invasive mugwort. Both spread underground. 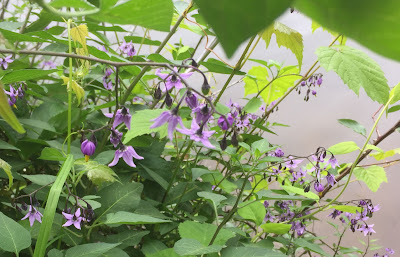 Bittersweet nightshade blooming on the shore of Lake Carnegie. 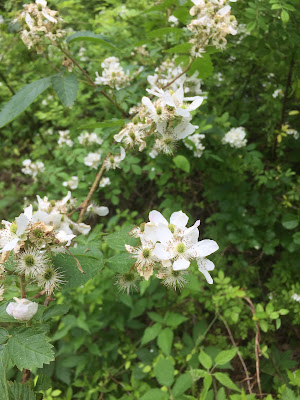 Blackberry flowers, with the green beginnings of the berry emerging as the petals fall. 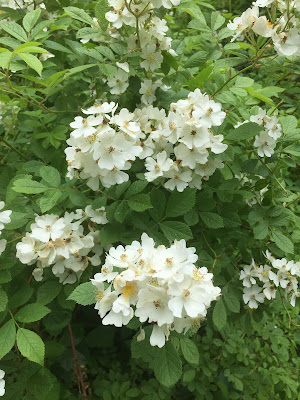 Here, for comparison, is multflora rose, a nonnative shrub, more common than blackberry, with larger clusters of flowers, curved thorns, and lacking the linear grooves on the blackberry's stem. 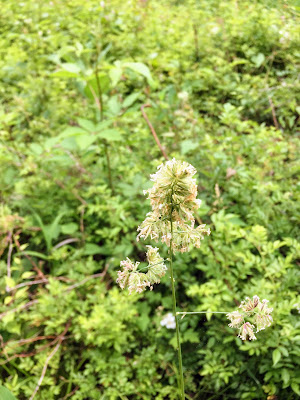 Orchard grass blooming. Non-native but not very aggressive, often found as a single, erect clump here and there. 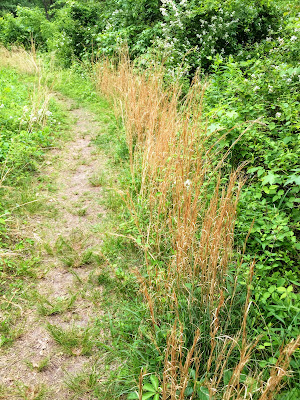 The orange-tinted remains of last year's broomsedge, which is not a sedge but instead a native grass, here lining the trail. Like other native prairie grasses, broomsedge is adapted for periodic fire, which its persistent stems encourage. A field of broomsedge can be very pretty after it turns color in the fall, though farmers associate it with poor soil. 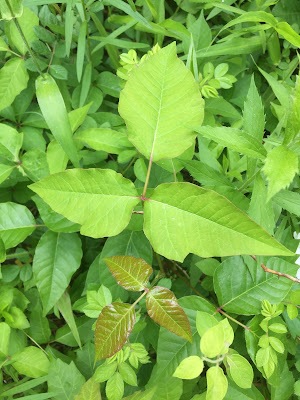 Learn to recognize poison ivy in all its forms. It often looks glossier than other plants with three leaflets, reddish when young, with traces of red remaining in the stem later on. The pair of lower leaflets often show a "thumb" along the lower edge, a subtle version of which can be seen here in the mature leaf. People are surprised to learn that vines like poison ivy only bloom when they find a tree to climb up. 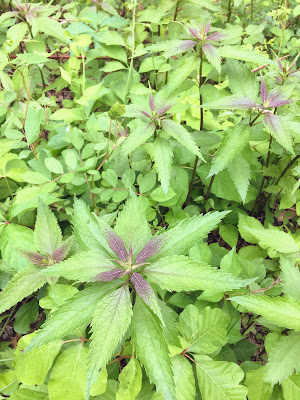 This is a hopeful sight for any lover of Joe-Pye-Weed, which will ornament the trail later in the summer in the patchwork of shade and sun beneath the scattered trees. 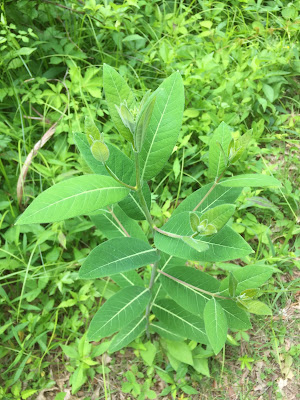 One of the dogbanes, which like milkweed will exude milky sap when you pluck a leaf.

Look closely at the photo below of Viburnum shrubs, and you'll see that the leaves of the one on the left are more distinctly toothed. That's the native arrowwood Viburnum (V. dentatum), while the shrub on the right is linden viburnum (V. dilatatum), a nonnative that has become surprisingly invasive in local preserves. As often happens, the native is seldom encountered, while the non-native is common, most likely due to deer preferring to eat natives. 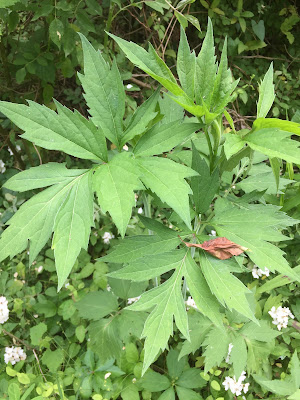 If you know your plants, then you'll look at this small clump of leaves and feel happiness at all the yellow, cone-shaped flowers cutleaf coneflowers will produce later in the summer. 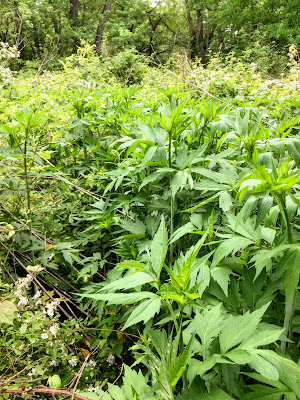 And even happier when you find a large congregation of cutleaf coneflower rising like a very slow-motion firework that will explode in color a month from now. 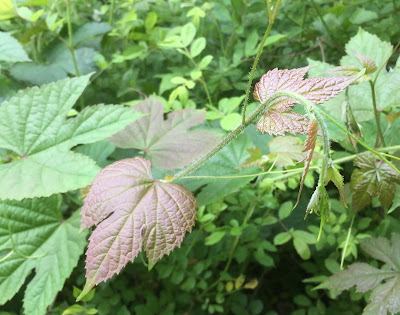 But knowing plants also allows you to foresee less auspicious trends, as the porcelainberry (NJ's kudzu wannabe) begins to grow up and over most everything in a smothering embrace. Persistent emails have yet to convince the university of the need to mow the field once a year in late winter, like state parks used to do. Annual mowing is the key to sustaining this open woodland of scattered trees lording over a vista of wildflowers.

There's a little parking just across the Harrison Street bridge. The trail loop is on the Princeton side of the towpath, just in from Harrison, with what looks like a birdhouse at the trailhead. Returning via the canal, I happened to see this yellow iris (I. pseudacorus), framed in the trees' reflection in the canal. The native iris sometimes seen is blue. 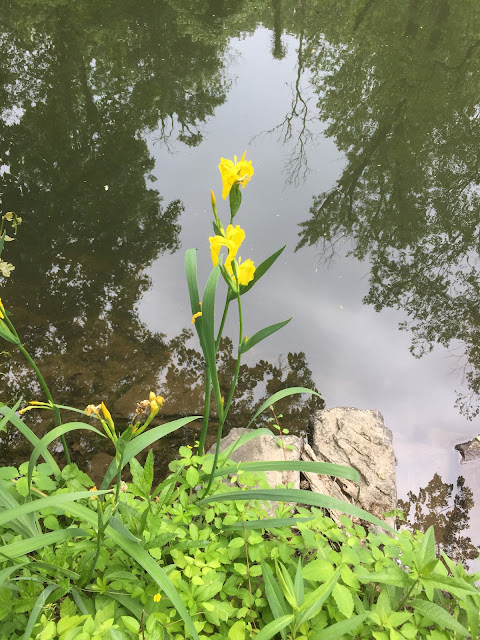