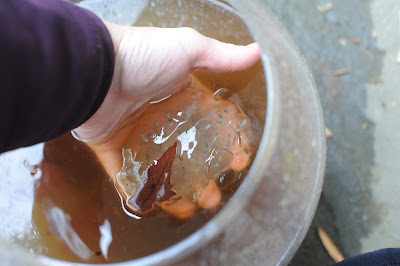 This spring in late April, I received a surprising email from my friend LisaB who lives out next to Autumn Hill Reservation, across from Herrontown Woods. An amphibian had mistaken the water sitting on top of her swimming pool cover for a vernal pool, and laid a cluster of eggs there. My somewhat informed guess? Spotted salamander eggs.
What to do with this unexpected gift? The salamander was not completely off-track in having laid its eggs in a puddle suspended over a swimming pool. Through uncanny luck, the swimming pool's owner happens to care deeply about the amphibians that inhabit the woods behind her house.

Lisa had contacted me back in March--March 15 to be exact--to report that the frogs in the neighborhood had been on the move the night before. "This was definitely Herrontown frog migration night," she reported. "Dozens on the road at 5:30a, all headed" towards Herrontown Woods to mate and lay eggs. "I only saw them in a relatively narrow band of ~a half mile, from the entry to Autumn Hill to the curve at Stone Hill Church. They were mostly moving in the dark early this morning--by 7am they were gone. Hope that protects them to some extent. Traffic picks up after 7." She suggested we organize next spring to serve as crossing guards for amphibians needing to cross Herrontown Road to get to their mating grounds, as is done elsewhere in the state.

On May 25, Lisa sent me a report on what she had decided to do with the salamander eggs, which otherwise would have been lost when the maintenance crew came to service the swimming pool. Since it's inappropriate to remove salamander eggs from a nature preserve, Lisa took this backyard gift as a rare opportunity to see salamander development up close. 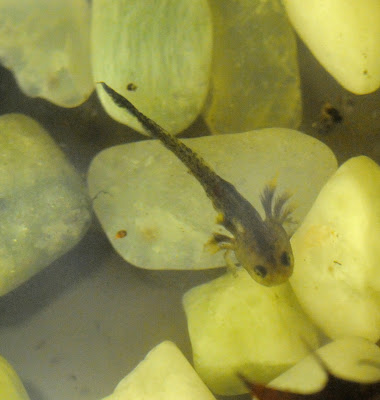 "I put some in a deep vernal pool in Herrontown Woods and hung on to a few. They live outside in a tank so they get all the usual temperature variations, plus bonus mosquito larvae to eat. They seem to really like live blackworms, which I am now growing in my fridge (uh, don't tell my kid). I'd love to see one develop spots, which takes a few weeks after transformation. They already have puny little front legs!"
On June 24, another update:
"Salamander larvae are starting to transform! Losing their gills and showing their spots. Voracious carnivores!"
And on July 7, more detailed reports begin about the salamanders' metamorphosis, mixing affection with the close observation honed in her career as a scientist: "The two that transformed first flew the coop. For now I put lids on the tanks, so the next three to transform are still here. Some cool things I didn't know:"

1) "As they start to transform, their GILLS start to develop bright yellow spots just before they regress."

2) "Each one has a unique spot pattern that coalesces and intensifies as they transform, which makes them easy to tell apart. Not sure what nucleates the spots." 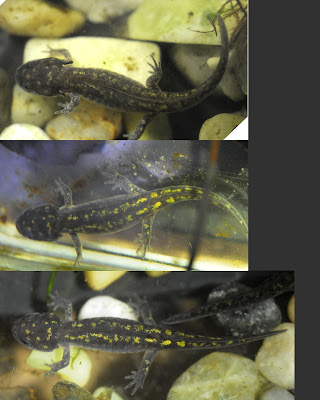 "This sequence of photos, taken two days apart, shows the development of spots on a transformed salamander."
"They become very shy once they transform. The larvae are just hanging out in the water column. I know they're about to transform when I look in the tank and I can't find them. The ones that have transformed are always burrowed under the moss. Interesting, for a stage with what looks like aposematic coloring ("don't eat me! I'm brightly colored and probably toxic!"). Probably they aren't actually toxic, and so the bright yellow spots pretty strongly select against anyone who is ever out in the open."

3) "The darkness of the larval stage seems influenced by substrate--ones raised on light rocks are lighter in color than ones raised in a pile of leaf litter. Not sure if it's a developmental camouflage or they're just dark because they're eating/covered in leaf gunk. "

Here are spots developing on a "new guy." Photos taken on days 1,2,3, 6, and 7.
By mid-July, thoughts turned to what to do with the salamanders once they've grown. "Technically I think I'm not supposed to release them, given there is some risk of introducing new pathogens into the local population (e.g., from the worms I feed them, which came from afar). Two did escape, though, so that ship may have sailed."
The Watershed Institute didn't have room. Salamanders apparently, and fortunately, given the potential danger to wild populations posed by poaching, don't make very good pets. They prefer to remain hidden, and can live up to 20 years. Many have toxins in their skin, and can easily absorb harmful oils and chemicals on our skin if we touch them.
Finally, Lisa reached out to the Mercer County wildlife center, which then reached out to the senior biologist from the New Jersey Division of Fish and Wildlife Endangered and Nongame Species Program, who gave the following advice:
"From what I’ve read below I consider this to be a pretty low risk release and would recommend her to release them as near as she can to reasonable habitat by her property and best case would be to release them during the late morning when there’s some rain or release them an hour or so after sunset during a rain." 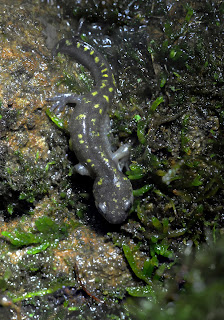 One thing I've learned while putting this post together is that spotted salamanders (Ambystoma maculatum) have a longer incubation period than most species. Most vernal pools dry up once the trees leaf out. Only a few stay wet enough long enough to sustain the larvae until they metamorphose into juveniles.

Lisa sent a link describing how spotted salamander eggs incorporate algae into the body of the embryo. They become solar salamanders. The algae symbiotically provides energy and eats the salamander's waste. The algae fades away during the larval stage of the salamander.
Thanks to LisaB for all these photos and information. One more thing she shared speaks to why this was such a meaningful experience for her:

"I've been turning over stones looking for salamanders since I was a kid, and have seen hundreds of Eastern Redbacks. Once, when I was <10, one of the other kids found what I now know was probably a spotted salamander, and came running to tell the others (we thought they were lying about a salamander the size of a hotdog). That was the closest I've come to seeing one, despite the fact that they are all over here, until 40+ years later one decided to lay eggs on our pool cover." 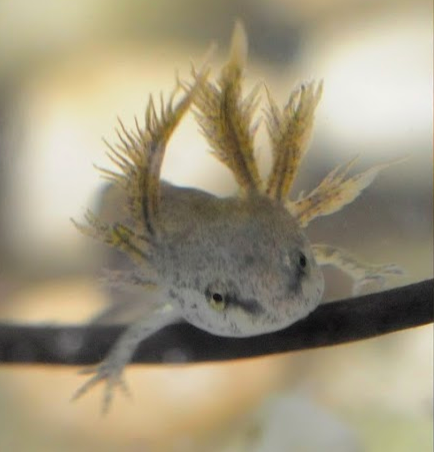